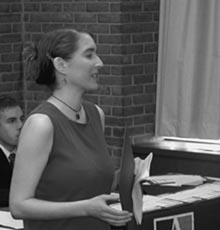 An Interview with Zahara Heckscher

As a contributing editor to Transitions Abroad Magazine, Zahara Heckscher has long been committed to her belief in bettering communities overseas through social justice organizations and volunteer programs. She got her start planting fruit trees in Zambia and helping to build a medical clinic in Nicaragua. The founder of Community Alliance for Youth Action, Heckscher lectures on international volunteering to college campuses around the country. She has just completed her new book How to Live Your Dream of Volunteering Overseas with co-authors Joe Collins and Stefano DeZerega.

Our first question to Zahara was: Why volunteer? What are most people seeking in their volunteer experience?

Heckscher: People volunteer for both selfish and altruistic reasons—they want to learn, grow, have an adventure, and they also want to help others. Ironically, we found that the best volunteers tend to be those with the most clarity in their personal goals (e.g., “I want to learn Spanish and develop my cross-cultural skills”) and with the most modest goals in terms of what they want to accomplish for others. Volunteers who have overly lofty goals of “saving” the poor are not only likely to be disappointed; they also may end up doing harm to local communities. I encourage potential volunteers to be honest with themselves and realistic with others. Learn from people who value process more than outcomes, relationships more than standards of living, and a relaxing pace of life more than getting to meetings on time. One volunteer told us that his best experience was sitting under a tree with his colleague and his son, eating mangoes, and just enjoying life.

TA: When did you first volunteer, and where?

Heckscher: I first volunteered in Nicaragua in 1986. At that time the U.S. was funding a “contra” army that was trying to overthrow the democratically elected Sandinista government. Like many “solidarity workers,” I wanted to put my dissent against the war into action, and I wanted to learn about the innovative literacy and environmental policies of the Sandinistas. I worked in a small town called Niquinohomo on a sister-city project, helping to turn a large house into a medical clinic. I mixed cement (with a shovel) for the septic tank—and I loved it! Getting blisters on my hands, sweating under the hot sun with my Nicaraguan co-workers, and seeing the septic tank take shape was truly satisfying. But the war was always there in the background. Being in Nicaragua also exposed me to extreme poverty and the ugly side of U.S. foreign policy. The joy of the work and the disturbing realities of the war had a profound impact on what I have done with my life since then.

TA: What are some of your top tips for people who want to be as effective as possible during their time volunteering?

Heckscher: From our chapter on effective volunteering, my favorite tips are: First, learn the language—because how can you be effective if you can’t communicate? Secondly, dive into the host culture by learning a local craft, song, or dance, using public transportation, offering to make a presentation at a local school, asking someone to teach you how to cook a local dish, and attending a local religious service, even if you’re not religious. Finally, listen before you act. When you take the time to develop relationships and cultural understanding, your work will ultimately be more effective than if you just rapidly plow through your to-do list. Often the most effective work to help others comes only after the initial volunteer experience, when returned volunteers make a long-term commitment to work for a more just world. By enjoying new experiences, challenging themselves, and interacting with fascinating people, most volunteers meet their goals.

TA: What advice do you have for people who want to volunteer, but have fears about their safety overseas?

Heckscher: Volunteer, but volunteer wisely. That means checking with the Centers for Disease Control to make sure you get all needed shots; drinking only boiled or bottled water, and looking both ways twice before you cross the street. Disease, car accidents, drowning, and crime are much more significant dangers than terrorism. If you are particularly worried about political violence, avoid nations with hostile attitudes toward the U.S., nonpeaceful demonstrations, and sew a local flag onto your backpack. But don’t let fear dissuade you from volunteering.

TA: Do you have any special tips for female volunteers?

Heckscher: Unfortunately, harassment of women is prevalent all over the world. Female volunteers are sometimes victims of the stereotypes perpetuated by “Baywatch” reruns and pornography broadcast even in remote destinations. Women sometimes inadvertently feed these stereotypes by dressing inappropriately, drinking, and even just being friendly. In some countries, looking a man in the eye, smiling at him, or letting him walk you home indicates that you want to be in a sexual relationship with him. We encourage female volunteers to talk to local women to find out local norms and what they do to protect themselves. For example, in Albania, women who smoke are considered to be “loose,” so most women avoid smoking in public (or at all). To avoid harassment, Mexican women sit together in public places, even if they don’t know each other. Female volunteers should be willing to give up some of the freedoms they normally enjoy. They should also know that, as at home, acquaintance rape is more common than stranger rape. Do not let your desire to be culturally understanding overrule safety concerns; it’s better to risk being rude than to risk a dangerous situation. Exercise extreme caution in dating and romantic relationships; in fact, we strongly recommend that you do not get romantically involved with any local people while volunteering. The good news is that female volunteers have access to the secret world of women overseas—rituals, stories, and friendships that are off limits to male volunteers.

TA: The Peace Corps is probably the most well-known volunteer organization in the U.S. How have its missions and volunteers changed since its inception in 1961?

Heckscher: Surprisingly, the Peace Corps has not changed much in the past 40 years—a reality that is both encouraging and disconcerting. Volunteers are still idealistic and determined, but overwhelmingly young and inexperienced, which limits their ability to contribute. About half still work as teachers. The Peace Corps experience is extremely variable—from teaching environmental education to fifth-graders in Bolivia to training Mongolian businessmen in accounting techniques. The dropout rate is still high; about 29 percent, due in part to medical problems, poorly conceived assignments, and inconsistent support from Peace Corps staff. The Peace Corps is not for everyone—it is still very much coupled with U.S. foreign policy; because of this affiliation, volunteers are not supposed to criticize the host government (allies of the U.S.) or join Amnesty International, for example. Some things have changed: volunteers no longer ride motorcycles, few live without electricity, many teach business development, and more are people of color (14 percent).

TA: How can overseas volunteers maintain a level of social consciousness after they come home?

Heckscher: I believe the most important part of volunteering is what you do when you come home. The work I did in Washington, DC against the Contra war was probably more valuable to the Nicaraguan people than the septic tank I helped build. We encourage volunteers to think about ways they can get involved in addressing the root causes of the problems they witnessed overseas. That could mean participating in a human rights campaign, promoting alternative trade with a group such as Oxfam, or joining the World Bank Bond Boycott until the Bank changes its damaging policies. Other returned volunteers share their experiences with local schools, support immigrant communities, or apply their new skills to development at home. Our web site, www.volunteeroverseas.org, contains extensive resources to help volunteers stay engaged. Volunteering opens new worlds to you. The key is to see it not as an end but as one important step in becoming an active global citizen.

This story has been posted in the following forums: : Headlines; For Prospective Volunteers; Volunteerism