After graduating from the University of Florida, Alicia Breton became an agricultural volunteer in the Peace Corps, though her specialty was vegetable crops 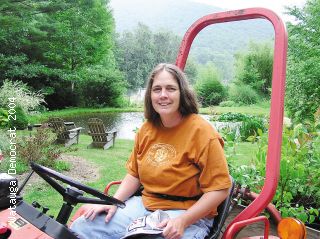 After graduating from the University of Florida, Alicia Breton became an agricultural volunteer in the Peace Corps, though her specialty was vegetable crops

A Todd woman has seen her business turn green over the last few years, though she’s competing with the elements of weather and location working against her.

Alicia Breton operates a landscaping nursery at her 16-acre tract on Three Top Road with the help of her friend Sheila Sherman.

Both had been employed at Goodnight Brothers, a former Boone plant supply store, for about 20 years.

As that business planned its closing, Breton began expanding her stock and decided to try working in her own business.

The plugs are purchased in trays of 500, and are then grown in pots. Annual plants can take anywhere from six to eight weeks before they are market ready, while some larger shrubs can take up to three years.

Breton transfers the plants to larger pots as they grow, though she usually limits herself to smaller trees.

Years of lifting sacks of seed and fertilizer have taken a toll on her back, she says, and a strained neck slowed her last year.

Breton said she mostly learned about the nursery business through trial and error. After graduating from the University of Florida, she became an agricultural volunteer in the Peace Corps, though her specialty was vegetable crops.

Breton has five greenhouses, and she also installed the irrigation system for the nursery.

The irrigation system works on a timer to provide the right amount of moisture. Breton said if she had to water by hand, it would take her entire work day.

One greenhouse is double-layered and uses a fan powered by a photovoltaic panel.

That keeps the plants from overheating in the event of an electricity failure.

Breton said the greenhouse temperature can get up to 140 degrees within an hour without ventilation.

The other greenhouses are cold frames, meaning they aren’t heated. Breton said heating would add too much to the cost. However, it also shortens the time window in which she can grow stock.

“I like doing it so it doesn’t really seem like work,” she said. In addition to back pains, other occupational hazards include bees, who enjoy nesting in the greenhouses and have a ready supply of pollen.

Deer sometimes come down and graze on stock, especially rhododendron and other evergreens in the winter. Mice sometimes nest in the heater, blocking ventilation.

A couple of years ago, Breton lost all her rhododendron stock to a herd of deer. She often leaves evergreens outdoors in winter so they can get rain, but those are at risk of deer nibbling, too.

However, she enjoys the site of young deer playing around the house, so she accepts her neighbors even though suffering some business loss.

Breton admits she’s not a real organized person, but has somehow managed to keep track of hundreds of different varieties of plants.

She learned about many of them through her work at Goodnight Brothers, and by talking to long-time customers there.

She also said it’s easy to read up on an interesting subject. She began growing plants to fill in the market Goodnight Brothers was no longer serving while it prepared to close.

She also knew a number of landscapers to whom she could supply stock.

Breton also maintains a small vegetable garden, mostly for household use, though she fights the same battles against wildlife and the weather.

“I like a garden, it’s a little more forgiving than other disciplines,” she said. “For better or worse, every year is different.”

Breton has no true specialty, though hydrangeas and lilacs tend to be perennial successes.

She decided that she couldn’t make enough money solely on wholesale, so she has been selling at the Watauga County Farmer’s Market for over two years.

“The farmer’s market’s been a good outlet for a little bit of retail,” she said.

Major challenges besides the weather and wildlife are the shortened growing season in the mountains, which puts Breton at a competitive disadvantage.

The cost of health insurance is also a strain on any small business. However, she feels the quality of life is worth the trade-off.

“It’s a good way to meet a lot of people in gardening,” she said. “There’s a whole spectrum of people who enjoy it.”

Sherman operates a wood-working business in addition to helping with the nursery. Sherman makes custom chairs and other items, and may begin selling those at the farmer’s market as well. Breton keeps a list of items that people ask for at the market and enjoys getting out.

“It’s a nice place to have social contact with other human beings,” she said.

On July 7, the farmer’s market at Horn in the West in Boone will begin opening on Wednesday mornings in addition to Saturdays.

• Scott Nicholson may be contacted at nicholson@wataugademocrat.com.

This story has been posted in the following forums: : Headlines; Horticulture; Greenhouses; Agriculture