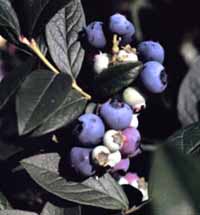 RENICK -- For the Robinson family, fields of blue convert to currency of green.

But the transformation requires years of work, lots of knowledge and huge doses of cooperative weather.

And while the family's four acres of blueberries may provide enough income to pay everyday bills, it won't land the Robinsons in the lap of luxury.

"We want to do this full time," said Anne Robinson, 41, who with her husband Max and their four children age 10 and under -- Hannah, Katie, Ben and Nathan -- run White Oak Farm in this Greenbrier County hamlet.

Currently, Robinson's husband, Max, works as a lab assistant a couple of days a week at the West Virginia School of Osteopathic Medicine, 15 miles south on U.S. 219 in Lewisburg, to supplement their income from the sweet, plump berries.

Unlike early last century when families supported themselves on small farms, times have changed, said Buddy Davidson, spokesman for the state Department of Agriculture.

"It's a rare thing today to make a living from a farm," Davidson said. "From a practical standpoint, it's not that common."

The Robinsons, though, have found Renick's scenic and clean living worth the hours and effort. They met while in graduate school at West Virginia University, where she was focusing on agricultural economics and he was studying horticulture.

They also spent two years in the Peace Corps in Africa.

After they planted their blueberry bushes in 1993, it took five years for them to bear fruit. Two years ago a late frost severely damaged their crop. And last year, finally, the bushes produced enough berries to make the business worth their while.

"In the past, we've struggled to have enough ripe berries," Robinson said.

At first, the Robinsons also sold their fruit to restaurants and other businesses. Today, however, they focus on the "pick your own" approach. They've met wonderful people, she said, from all over the state and from nearby Virginia.

They charge $1.20 a pound and provide pickers with a tie-on bucket and plastic bags. In just a half day last week, visitors had gathered 784 pounds.

But the July-to-August berry season doesn't represent the family's only investment in time. In the fall, they mulch with sawdust to control weeds. In winter, they prune the plants so they'll produce larger berries. Starting in April, they must begin mowing and fertilizing.

White Oak Farm, on Brownstown Road in Renick, is open daily except Sundays and Wednesdays. For more information, call 497-3577.

This story has been posted in the following forums: : Headlines; Farming; Agriculture; Married Couples