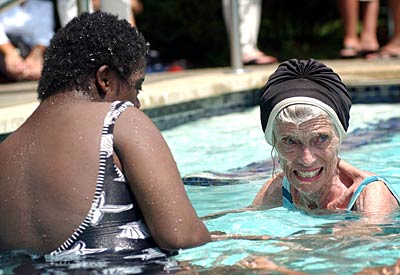 Caption: Njideka Anekwe of Gaithersburg gets swimming tips from Eunice Kennedy Shriver. Also on hand to help out were Shriver's children and grandchildren. (Sun photo by Andre F. Chung) Jul 20, 2004

Back where it all began for Special Olympians, Eunice Kennedy Shriver pats and pushes disabled athletes to reach their sporting potential.

By Kate Shatzkin
Sun Staff
Originally published July 21, 2004
Her white-blond hair swept into a black swim turban, Eunice Kennedy Shriver, 83, cut a rail-thin but commanding figure in the middle of her backyard pool.

"Now watch Mrs. Shriver's arms," she said to the group of young people around her, before launching into a smooth, sure crawl stroke. "I was a very good swimmer when I was your age."

Thirty-six years after she last ran a summer camp for the mentally disabled, which eventually turned into the Special Olympics, Shriver was at it again - trying to show the world that these are people who can participate perfectly well in sports if only someone is willing to show them how.

For two weeks, about 60 disabled campers - along with volunteer counselors who include some of Shriver's famous children and grandchildren - have roamed her Potomac estate, learning sports from basketball to bocce.

Though "Camp Shriver 2004" bears a resemblance to its '60s-era predecessors, some things were undeniably different. Maria Shriver, wearing a numbered blue jersey and kicking a soccer ball, is no longer a pre-teenage camp helper, but the first lady of California. She greeted campers with a simple "Hi, I'm Maria."

And her mother has survived a postoperative infection, a head-on car collision and a broken hip in the last four years. None of that showed, however, as she strode across the grounds. The elder Shriver's manner with disabled campers was the same as it had always been: not coddling, but buck-up.

Her Kennedy teeth clenched with a bit of agitation, she gazed at the tennis court turned into a basketball court, the soccer goals, the pool. "I'm mostly anxious for them to get moving," she said.

In the pool, she refused to accept defeat from reluctant swimmers, at times helping them turn their heads to breathe.

"You did OK," Shriver told Rynell Epps, 12, who nearly knocked her down as he half-walked, half-swam after her tutorial. "You have to practice that. You're going to swim by the end of the week."

The fifth of the nine children born to Rose F. and Joseph P. Kennedy, Eunice Kennedy Shriver showed early on an almost obsessive interest in the mentally disabled. Some said it was because she was especially close to her disabled sister, Rosemary.

When her brother John F. Kennedy became president, she took advantage of his position at every turn to spread awareness of the abilities that the developmentally disabled had. In 1962, after several mothers told her they couldn't find a summer camp for their disabled children, she decided to create her own at Timberlawn, the rambling farm in Rockville where the Shrivers brainstormed programs like the Peace Corps and Head Start.

The result wasn't always pretty, her children have said. Back then, developmentally disabled people generally went to their own schools or programs, and had few recreational opportunities.

"I remember many had never thrown a football or a soccer ball or swam in a pool in their entire life, so it was a much more dramatic experience, I think," said son Anthony Shriver, 39, who founded another organization for the disabled, Best Buddies, in 1989.

Maria Shriver, 48, declined through Special Olympics representatives to speak to a reporter yesterday. But she told Scott Stossel, author of Sarge, a new biography of her father, Sargent Shriver, that Timberlawn often was visited by "the most brilliant minds of the country. And then the other half of the time it would be filled by people banging their heads into trees ... I look back at it sometimes and I think to myself, 'I can't believe I survived that.' "

Why, after so much time, has she done this again? "I think her own internal clock said, we gotta get back in the pool," said her son Timothy Shriver, who now runs Special Olympics.

But the revived camp, which ends Friday, comes at a time when Special Olympics is pushing to increase membership in developing countries, seeking to involve 2 million athletes worldwide by the end of next year. The organization also is trying to encourage medical providers to provide better care for the disabled.

Eunice Kennedy Shriver talks about spreading "affection" among people to whole nations, a way to bring peace to a particularly fractured world. Love, she supposes, would be another way to put it, "but everybody thinks love's kind of passe."

She said that this is the first time in many years she has slipped away in the summer from her work at the Joseph P. Kennedy Jr. Foundation, which focuses on improving services for the mentally disabled.

"I decided this year, I hadn't had enough camp," she said.

The new version of Camp Shriver took place on the lawn of the expansive Potomac estate where the Shrivers now live, in the shadow of a cream-colored manse with green shutters off River Road.

Jeanne Ackerman of Rockville, a swimming coach at the original Camp Shriver, showed up there yesterday. Years after the camps had ended and Special Olympics had begun, her grandson was born with Down Syndrome. Now 18, he took part in the reborn camp's activities.

"They are so much more able," Ackerman, 76, said of the modern campers, attributing their advances to the movement Shriver started. "Volleyball would have been a throw-and-catch game, and it would have been dragging kids up from sitting down."

Yesterday, there was no need to coax camper Njideka Anekwe of Gaithersburg into anything. Marie Vincenty, her adviser at Quince Orchard High School, said Anekwe is normally very quiet. But after a day at Camp Shriver, Vincenty said, "she saw her dad and just started jabbering. She told him all these things she did."

Kristen Clark, 27, who helped out in the pool, is one of them. At a Special Olympics gymnastics competition in New Jersey, she found herself sitting near Eunice Kennedy Shriver. "We met right there and then," said Clark. "She wanted my address and phone number and everything."

Shriver arranged for Clark to work for Shriver's brother, U.S. Sen. Edward Kennedy, in Washington for the summer. Clark stayed with the Shrivers. "I got a chance to stay in a big room with a TV," she gushed.

On the tennis court turned basketball court, 10-year-old Anna Parsons didn't let the brace on her right leg - the legacy of a bout with polio in Russia - keep her from playing hard.

"Spread out, people!" the Columbia girl cried, wearing her game face as she put the ball back in play.

In the face of trouble, Anna seemed to take a page from Eunice Kennedy Shriver's book. Falling as she struggled for the ball - squarely on the leg with the brace - she scrambled right back up.

This story has been posted in the following forums: : Headlines; Peace Corps Directors - Shriver; Disabilities