John Kerry and John Edwards believe that the heart of America is the ethic of service: the responsibility of every American to make our country stronger. From the time he signed up for Vietnam through today, John Kerry has committed his career to public service. He believes that others who have served our country - in a military or civilian capacity - have a special contribution to make.

To foster the ethic of service and to help young people pay for college, John Kerry and John Edwards have already proposed the largest expansion of national service in our history-engaging 500,000 Americans in national service by the end of the decade.

NEW 'CITIZEN PATRIOTS FUND' Today, as part of their service plan, John Kerry and John Edwards are proposing to allocate $10 million per year to their 'Citizen Patriots Fund,' a new initiative designed to support a new generation of social entrepreneurs who have engaged in service themselves and now commit to starting creative new service initiatives across the country. Through their idealism and innovation, they can help change our nation. 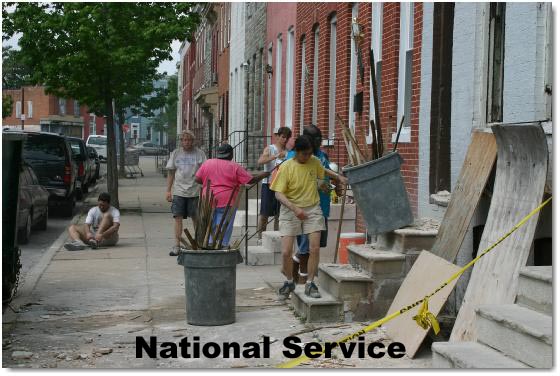 The Citizen Patriots Fund will make two-year grants of up to $100,000 to support up to 100 individuals who have (1) completed terms of service in the United States Military, the Peace Corps, or domestic national service like AmeriCorps, (2) demonstrated proven leadership ability, and (3) offered a plan for a new national service program that engages Americans in meeting a national need and earning college opportunity. Applicants will be required to get dollar-for-dollar matching funding from the private sector. At the end of the two years, when the programs are up and running, applicants could obtain additional support to expand their initiatives. Awards will be determined by a distinguished panel of judges including leaders from the private and public sectors, as well as successful social entrepreneurs and military leaders.

-- Many of America's leading national service programs were started by individuals with vision: For instance, City Year, which engages diverse young people in meeting community needs and building civic commitment; YouthBuild, in which at risk young people work toward their GED or high school diploma while learning construction skills and building affordable housing; Citizen Schools which brings communities together to offer after school opportunities; Habitat for Humanity, a faith-based initiative that encourages Americans to build affordable homes for their fellow citizens; and eoffrey Canada's leadership of the Harlem Children's Zone provides a comprehensive approach to the multi-layered problems of poverty for thousands of children. However, sometimes these programs have trouble getting off the ground. These grants would help fund innovative ideas to encourage service.

A Kerry-Edwards Administration will call on all Americans to make our nation stronger. Their plan includes:

-- 200,000 Americans serving full-time for two years and getting four years of college aid in return. These Americans will serve in some of America's toughest jobs, including:

-- Some 100,000 young people serving in other critical areas, from building affordable housing, to helping seniors live independently, to keeping our water and parks more clean.

-- 300,000 Americans in college serving part-time and teaching our children while at the same time earning help to pay for school, including:

-- John Kerry believes that service should be a graduation requirement. He believes that knowledge of the rights and responsibilities of citizenship - including the duty to serve your community - are as important to American adults as knowing how to read and do math. Under the Kerry-Edwards plan, states and local communities will design their own service requirements to make the requirement significant and meaningful without becoming onerous. Kerry and Edwards understand that young people have many obligations and recognize that a service requirement should not be too onerous or unrealistic for students to meet. Maryland, as well as numerous school districts around the country already have such a requirement and have had great results. A Kerry-Edwards Administration will provide funding for schools that choose to require community service as a condition of high school graduation.

Every penny paid for, with money to spare. John Kerry's plan requires roughly $13 billion in new resources over 10 years and is paid for by his new initiative to eliminate the subsidized and guaranteed profits for banks making student loans. Today, bank profits are set in statutes written by lobbyists. John Kerry will require banks to bid in an open auction for the business of student loans. He will take billions that now pad banks' earnings, and instead direct those resources to young people who want to serve America and pay for college, with money left for other service and education initiatives.

Paid for by John Kerry for President, Inc.

This story has been posted in the following forums: : Headlines; National Service; Election2004 - Kerry