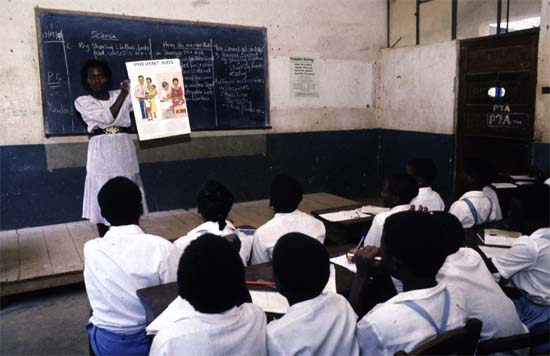 With current estimates putting the number of Africans infected with the AIDS virus at over 30 million people -- and some countries having adult infection rates as high as 30 percent, the United States is using every strategy possible to halt the spread of the disease on the continent.

In an effort to deliver the message of prevention and hope to the grassroots, President Bush has pledged $1.1 million to the Peace Corps to extend and deepen its commitment to local communities in battling the disease.

The funds, which are part of the President's $15 billion Emergency Plan for AIDS Relief, will help the service aid agency meet its objective of preventing the spread of the HIV/AIDS virus within Africa by paying for programs in countries the Peace Corps has designated as heavily impacted by the virus: Kenya, Mozambique, Namibia, Tanzania, Uganda and Zambia.

In an interview with the Washington File, Peace Corps Director Gaddi Vasquez defined the agency's directive: "Our principal [focus] is education and prevention. HIV/AIDS is an area that Peace Corps has been involved in for a number of years."

In an earlier press release, Gaddi had outlined how and why this new funding was a good marriage of fiscal and human resources, "Peace Corps volunteers, through their integration into communities, are at the forefront of the global battle against HIV/AIDS. I am pleased that the President and other organizations recognize the monumental role volunteers have in promoting education and prevention in their communities." In 2003, the Peace Corps dispatched 1,494 volunteers across the globe in order to help countries with HIV/AIDS.

In Zambia, $487,500 of the newly pledged funds will be used to help 83 Peace Corps volunteers work with the Ministry of Health staff and Zambia's eleven Rural Health Centers to educate local communities in HIV/AIDS awareness. The programs planned within the country include youth activity projects and neighborhood health committees.

In Uganda, $194,000 is going to be used to provide enhanced training in technical and management skills for volunteers and their counterparts so they can conduct intensive HIV/AIDS training, observation and follow-up with local teachers. They will also work with center tutors in communities to integrate life skills and HIV/AIDS into school curricula, broadening the linkage between schools and communities on HIV/AIDS prevention and treatment.

Mozambique just received their first Peace Corp volunteers in April 2004. Forty-five volunteers will be working to improve the health status of a country that a Peace Corps press release described as "among the worst in the world." The additional AIDS funding of $189,000 will help create an information, education and communication manual for use by secondary and technical teachers.

Existing programs in Tanzania will be expanded as a result of the $124,000 pledged to operations in the countries. The budget supplement will help finance the training of peer educators working with youth to increase awareness about the virus. Similar programs have included participation of up to 5,000 students.

Namibia will soon house an HIV/AIDS technical advisor as a result of the $92,000 pledge from the Emergency Plan for AIDS Relief, and Kenya will use $44,000 for testing centers and other projects to combat the epidemic.
Relevant Links
United States, Canada and Africa
AIDS

Vasquez was optimistic Peace Corps operations will set the tone for future humanitarian work. "The fact that the Peace Corps has been on the ground, and we have the personnel on the ground in the form of Peace Corps volunteers, who are ready, prepared and willing to do work in the prevention and education of HIV/AIDS, is critical. And I think this is a positive example of the kind of efforts that can be undertaken to address this pandemic."

I am Tamiru Gebre from Ethiopia.Now I am attending a post graduate study at Addis Ababa university school of graduate study in Biloigy.
So far I was involved in facilitating Life skills trainings for in school and out of school youths in relation to the porevention and control of HIV/AIDS.I have got it very interseting and has changed my life and those who are the beneficieries of my training.Therefore , here I am asking you to provide me any materials which you are assuming useful to my service. Especially those which are participatory methods.
Thank you !
Tamiru Gebre