If Ted Kennedy has his way, the Peace Corps will be pushed to center stage as representing what America stands for 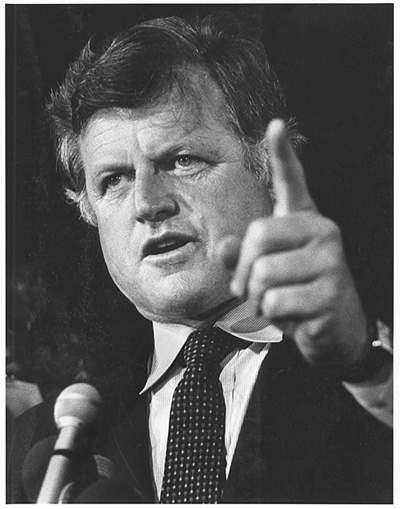 If Ted Kennedy has his way, the Peace Corps will be pushed to center stage as representing what America stands for

Summoning up all of his political energy and strength, Ted Kennedy has put together the Democratic ticket to defeat George W. Bush and restore the Kennedy dynasty through a surrogate. Without Kennedy, John Kerry would be nowhere, his campaign a disaster. It was Kennedy who told him to fire his campaign manager and take on Mary Beth Cahill from Kennedy’s own staff as the replacement. Then, he brought the entire Massachusetts congressional delegation into Iowa to pull out a victory, deflating Howard Dean and Richard Gephardt. John Edwards came in a strong second, which is also what Kennedy wanted. The man who would be king thus has settled on being the kingmaker.

Both Kerry and Edwards say that it was John F. Kennedy who inspired them to go into politics. Ted Kennedy knows this. And he also knows that his late brother was going to dump Lyndon Johnson and replace him with Terry Sanford, the governor of North Carolina, who was the shining light of what was called the "new south." Had this happened, the country might have avoided the Vietnam War and the backlash that led to the resurgence of Richard Nixon and, ultimately, the triumph of Ronald Reagan. Now, in the twilight of his own career, Ted Kennedy sees a similar situation. If Bush is reelected, preemptive war, unilateralism and hegemony will continue as the basic components of American foreign policy. "The only thing we have to fear is four more years of Bush, " Kennedy bellows.

Kennedy rightly sees John Kerry as the Kennedy surrogate (his initials are JFK) and Edwards, the rising star of the Democratic Party from North Carolina, as the Terry Sanford surrogate. And with Kennedy as the ranking Democrat on the Senate Labor Committee, which he is likely to chair again as control of the Senate could easily shift, Sweeny and the Union Leaders (they sound like a Seventies rock group) were not going to buck him and back Gephardt. They pulled the plug, and Gephardt, of the old Hubert Humphrey wing of the Democratic Party which had never accepted the Kennedy leadership of the Democratic party, was sunk. This was settling old scores with the Humphrey camp, going back to Humphrey’s challenge to Kennedy in 1960, and his role as Johnson’s vice president, a position Robert Kennedy had coveted.

Likewise, the pulling of the plug on Howard Dean settled old scores with the Eugene McCarthy wing of the Democratic Party that had rallied to the Vermont doctor. Had McCarthy not run, the coast would have been clear for Bobby Kennedy without the chaotic primary season that ended with his assassination.

In the general election, the final score to be settled is with Dick Cheney and the Neo-Cons, that cult group with the one big hit, "It’s the Same Old Song." Most of these characters are Scoop Jackson leftovers, bearing the old grudge dating from JFK’s rejection of Jackson for the vice presidential nomination in favor of Johnson. Richard Perle and Paul Wolfowitz are former Jackson acolytes who found a home in the neo-con movement, social democrats who favor military action before diplomacy and who accuse the Democrats of being soft on terrorism. They will tell you that Kennedy sold out Laos, making the Vietnam War inevitable. Back with them is that unforgettable act, The Committee on the Present Danger, starring Max Kampelman and Jeanne Kirkpatrick, last seen in public playing the Cold War Café.

The Kennedy argument is that JFK was right in Laos. And that Bush and the neo-con Jacksonite heretics are a threat to the entire western Imperium. Just as Kennedy waged the Cold War with an appeal to idealism, so Kerry and Edwards will wage the war against the Jihad insurrection by offering an inspirational vision of the future. 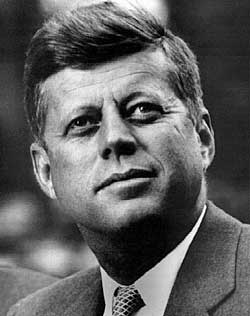 Once more, the Peace Corps will be pushed to center stage as representing what America stands for, even as Kerry attempts to run to the right of Bush. The liberal façade of the empire, it is argued, is the best way to fight terror, as Paul Berman insists. In 1960, JFK and the Missile Gap, a liberal group, pretended to be to the right of Nixon, saying they, not the Republicans, knew how to fight Communism and the Soviets. Nixon was the guy they threw rotten eggs at in Venezuela. Bobby Kennedy was the guy African students cheered and hoisted on their shoulders when he spoke to them. Now, "W" is Nixon, who had his Michael Moore in Emile D’Antonio.

But what this is ultimately about is the America version of the War of the Roses, the House of Bush versus the House of Kennedy. Kennedy even compared Bush to King George III in his speech to the convention, so ingrained is the royal metaphor in his mind. That George W. Bush was able to succeed his father, with Bill Clinton, the ersatz Kennedy in between, has been too much to take for the last representative of a dynasty that was defeated not at the polls but through assassination. Kennedy’s own run against Jimmy Carter, propelled by what was perceived as Carter’s hostility towards Israel, made Ronald Reagan possible. But Carter had to go, just as Hillary Clinton, the heir to another potential dynasty, must be preempted from becoming president. No, before he steps down, Ted Kennedy is determined to see the new JFK in the White Housie and John Edwards safely installed as the next in line. This is the final battle, with Ohio set out as Bosworth Field ("A vote! A vote! My kingdom for a vote!) There, Kennedy will pull out all the stops in his last effort to see the Democratic Party in the Kennedy image back in power for the duration.

The vilified George W. Bush is set in the role of Richard III, an imposter and villain who will stop at nothing to gain and keep power. Michael Moore is the Shakespeare of the Democrats, compounding the myth that Bush is the personification of evil, much as Shakespeare portrayed Richard. The list of Republicans and military brass abandoning Bush is growing, just as Richard’s allies betrayed him. Even Kevin Phillips, the architect of Nixon’s southern strategy, now says Bush and his entire family are corrupt and must be banished. He has gone so far as to offer a new southern strategy for the Democrats to put the liberals in power. If Kennedy has his way in November, history will be reversed, with the liberals, led by the Kennedy wing of the Democratic Party, triumphant.

Panic has started to set in, as the GOP begins to realize that they are saddled with a ticket that could sink, leaving Karl Rove and the Hacks searching for gigs in the boondocks. All that patronage, gone. All the power, the perks, vanished, with the old nemesis back on top. This is the power struggle that characterizes all nation states and will continue long after these players have strutted and fretted their hour upon the stage. It has nothing to do with ideology, as Wordsworth knew. As he wrote in Rob Roy’s Grave, "For why. Because the good old rule sufficeth them, the simple plan,/That those should take who have the power,/And those should keep who can.

Richard Cummings [send him mail] taught international law at the Haile Selassie I University and before that, was Attorney-Advisor with the Office of General Counsel of the Near East South Asia region of U.S.A.I.D, where he was responsible for the legal work pertaining to the aid program in Israel, Jordan, Pakistan and Afghanistan. He is the author of a new novel, The Immortalists, as well as The Pied Piper – Allard K. Lowenstein and the Liberal Dream, and the comedy, Soccer Moms From Hell. He holds a Ph.D. in Social and Political Sciences from Cambridge University and is a member of the Association of Former Intelligence Officers. He is writing a new book, The Road To Baghdad – The Money Trail Behind The War In Iraq. He is a contribution editor for The American Conservative.