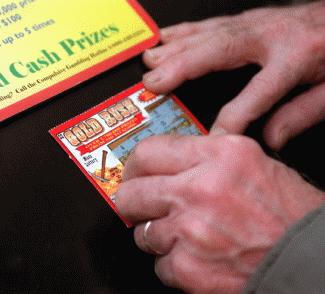 A Korean War veteran from Brookline who set out to buy a Megabucks ticket but came home with a Mass Millions one instead is suing the Massachusetts Lottery, charging the agency cheated him out of a $4.5 million jackpot.

William J. Horan - who says he would have donated most of the money to Catholic Charities and poor people he met while in the Peace Corps - claims a corner-store computer glitch cost him a fortune.

``I've worked for the state. I know how they do things. They try to hide their mistakes,'' said Horan, a retired accountant with the state Division of Employment Security.

A habitual lottery player, Horan, 71, said he walked around the corner from his Perry Street apartment on April 25, 2001, to the Brookline Spa on Harvard Street to buy a Megabucks ticket for a drawing that night. Horan's ticket had the winning numbers, but the wrong game. The ticket he received - but says he never checked until it was too late - was for a Mass Millions drawing the following Monday, April 30.

``I was having a party at my house on the night of the (Megabucks) drawing. I said to my friends, `Lookit, I hit.' And they were all congratulating me,'' Horan recalled. ``Then I noticed it was for the wrong drawing.''

He appealed his case to the lottery in 2002, but it was rejected in June. He then sued the commission in Suffolk Superior Court on July 28.

Horan also claims the lottery ticket printer at the Brookline Spa in 2001 was well-known for ``having multiple troubles'' that resulted in ``printing errors of dates and entries.''

Store owner Eric Battite said occasionally a paper ticket would jam in his machine, but there were no problems beyond that.

``Why would I lie?'' Battite said, dismissing Horan's story.

Lottery spokeswoman Amy Morris said she could not comment on the pending litigation, but added, ``We are confident in the integrity and security of the technical systems which administer our games.''

This story has been posted in the following forums: : Headlines; Humor; Law

the lottery is nice