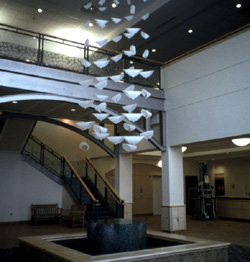 Bringing insider knowledge to RACC
The new director of the Regional Arts & Culture Council weighs in on her career and cultural issues
Sunday, August 15, 2004
D.K. ROW

After looking outside the state for its last two executive directors, the Regional Arts & Culture Council skipped the national search process for its latest leader, staying in-house and picking one of its most trusted employees, Eloise Damrosch.

For 17 years, Damrosch has worked in various capacities for the nonprofit organization, which, among other things, oversees percent for art projects and arts education programs and dispenses grants and fellowships to artists and arts organizations in the tri-county area.

Most recently, the 59-year-old Wellesley College graduate and former Peace Corps volunteer was RACC's public art director. Aside from helping set public art policy, the job allowed Damrosch to forge deep relationships with the local arts community, relationships that her two predecessors from outside Oregon, Mike Pippi and David Hudson, did not have. Pippi left abruptly in 2000 just before the RACC board began his first year job review; Hudson left in May after three years at RACC to be with his partner in North Carolina.

Damrosch's familiarity with Portland should bring balance to RACC, which started out as the city-run Metropolitan Arts Commission and then, in 1995, became privately run. Recently, Damrosch spoke briefly about her June promotion, her career and several cultural issues, from arts funding to one of RACC's more fiercely contested public art projects.

What major changes should the public expect from RACC with you as director?

Well, for the time being, I'm going to continue the direction we've been going in, like the workplace giving program (started by Hudson). That's going to take nurturing, a lot of visiting with people in the corporate community. As far as radical initiatives, we don't have the funds to do much right now. In my first six to eight months, I want to reconnect with the arts community that David (Hudson) was working with directly.

In theory, RACC could be competing for money from foundations that might serve the same people it helps -- vying for the same dollars as artists and organizations who depend on you for money.

I think there was angst among the arts leadership when we first became RACC that we would be robbing the same coffers. But we haven't done that. It would have been interpreted as being too competitive (with RACC's constituency). So we spent time figuring out how not to compete. That's where David (Hudson) came in. One of his strengths was his experience in workplace giving. One way to get individuals to donate to arts organizations is through workplace giving, where workers can donate a small part of their paycheck to RACC's fund, which then goes out to arts organizations. That's not competing. I have to give David that credit. He brought that experience, rolled it out, and Jeff (Hawthorne, who was hired in 2003 to oversee development) ran with it.

Do you feel RACC is separate enough from the rest of the community to serve it objectively?

In the sense we are connected into the arts community, we hope that we are. We have to be in order to do what we want to do. On the other hand, we are the only organization that's set up the way we are. . . . If there were three different granting organizations, that would be a different situation. Northwest BCA (Northwest Business Committee for the Arts), for example, has a special mission related to ours but it's different. They are a membership organization for businesses who support the arts; we're more of a granting agency. We intersect and partner with them. Same thing with the Portland Oregon Visitors Association. We intersect with cultural tourism, but that's not our job. We just feed that effort. We're part of a network, but we're the only grants-making organization other than big foundations, and we don't compete with them.

In 2002, Noel Harding proposed putting a 47-foot-tall windmill on top of Multnomah County's administration building. The project was technically difficult and expensive and was met with great resistance by some elements of the public, the Portland Design Commission and some politicians who saw it as a potential eyesore. Ultimately, RACC halted that process and is pursuing another, more traditional option. Your thoughts looking back?

That was an interesting project. The major reason we canceled it was that the maintenance of Noel's project could have conceivably eaten up our annual maintenance budget. There were a lot of unanswered questions about how much of a challenge that would be. In retrospect, it would have made more sense to have a design phase contract where Noel could answer all of the technical and maintenance questions before we wrote the contract that said he could make the piece. On a project that had so many unknowns, it would have been much better to answer the questions first. The other thing we learned was how we intersected with the design commissions. We're working on fixing that, getting the roles clear: Who judges art, urban design and architecture? When do they intersect?

Yes, look at the fact that in the last 15 years, public agencies that didn't have any percent for art requirements either have taken them on, adopted them, or done it voluntarily. If they didn't think their constituents weren't in favor of it, they wouldn't do it because it's a lot of money. Look at TriMet: They didn't have a public art program until westside light rail; now they have their own staff and program. They're totally committed, especially with an agency that deals with so many people. They got the message that people want art.

Three directors in four years, and even two physical moves. Is there a lack of stability at RACC?

I think three directors in four years -- that sometimes happens. . . . As for RACC moving, we had no intention of leaving the Creative Services Building (Portland Development Commission, the building's co-owner, decided to move into the building, thereby requiring tenants to leave). I mean, when we signed (a lease), we thought that would be our home.

After 17 years, can you see this city, this organization and this job freshly?

I'd like to think I do. When I look back and think what my job was like six or eight years ago, it's different. That's why I took this job, because the way we have it structured, I can do some public art work. I'm still doing something I can be passionate about. But I'm not doing the individual start-to-finish projects I did for so many years. That keeps my head clear. I'm working in other communities.

This story has been posted in the following forums: : Headlines; Art; Museums