A decade ago, the Curtisses returned to Kent after nearly two decades during which they served in the Peace Corps and taught abroad. Denis removed 35 gallons of bat guano from the barn upon his return. Now he cleans the guano out yearly 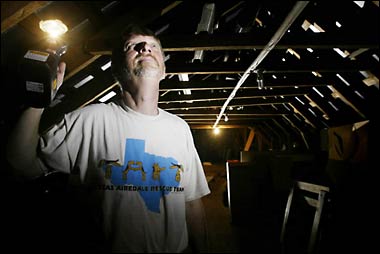 A decade ago, the Curtisses returned to Kent after nearly two decades during which they served in the Peace Corps and taught abroad. Denis removed 35 gallons of bat guano from the barn upon his return. Now he cleans the guano out yearly


Caption: DENIS CURTISS, an artist in Kent, looks for small brown bats that have made the loft of his barn their home. Photo: MICHAEL MCANDREWS Copyright 2004, Hartford Courant

Denis and Barbara Curtiss of Kent want to do the right thing.

They would rather not, of course, have hundreds, maybe thousands of bats living in their barn, where Denis works as a sculptor. And they definitely do not want bats flying through their home and into the bedroom, as happened earlier this summer. Nor do they wish to endure again bat droppings streaming down from the attic of their Revolutionary War-era home.

But they are not ready to destroy the bats either, as so many others might be inclined to do, bats being held in about the same regard as snakes and spiders by many people.

Denis Curtiss knows that bats have their place in the scheme of things, that they eat a lot of insects every night, including mosquitoes. Because the Curtisses live next to a wetland, mosquito reduction is a real plus.

So they are willing to coexist with the bats. Well, sort of.

Jenny Dickson, a state Department of Environmental Protection wildlife biologist who is the agency's bat specialist, made a house call at the Curtiss home and barn the other day, confirmed what she suspected - that they have one of the biggest known summertime bat colonies in the state - and made some suggestions on what the Curtisses might do with their bat problem.

On a cool morning last week, many of the bats appeared to have dispersed, though easily two dozen or more could be seen in nooks above the rafters. But the guano was the giveaway to the real number of bats that live there.

In two places, one at each end of the barn loft, there were accumulations of guano up to 2 inches deep covering areas the size of large beach blankets. On one wood shelf on the side of a chimney, the guano, which is similar to mouse droppings, was up to 5 inches deep.

"It's definitely a large pile of guano, which would indicate there is easily several hundred bats here on a yearly basis," Dickson said. She said she knew of only a half-dozen other such barns or homes in the state where such a large number of bats could be found during warm-weather months.

The adult bats in the Curtiss barn are mostly females, and they are there to give birth and raise young, which are just now venturing out on their own. Once colder weather arrives, these bats and others around the state will migrate to caves for the winter. Two major wintering caves are in Winsted and Roxbury, and there are others in New York state.

The bats in the Curtiss barn have returned for decades, which is not unusual. Dickson said bats can be very loyal to a roost, with a colony returning every spring to the same roost for 40 years or more. A little brown bat, the species roosting in the Curtiss barn, can live more than 35 years.

"We certainly are looking to get more information on colonies like this one throughout the state," Dickson said. "This one is definitely up there in terms of colony size."

A decade ago, the Curtisses returned to Kent after nearly two decades during which they served in the Peace Corps and taught abroad. Denis removed 35 gallons of bat guano from the barn upon his return. Now he cleans the guano out yearly.

For most people, of course, a bat problem might mean a few bats, not a few hundred or few thousand. Bats often tuck themselves behind shutters, under the eaves, or take up residence in an attic crevice. Homeowners often don't even know they are there.

Dickson typically hears from homeowners when they paint a house or have it power-washed, both of which can disturb bats and cause them to fly. It is then that people discover they have bats and, often, want them gone.

People in the country, like the Curtisses, may know there are bats in a barn or an attic but let them be as long as the bats don't cause a problem.

"Most people who have lived in the country have probably had bats in the barn or the attic for years and never paid attention to it. It's just something that folks who are used to living with them don't think twice about," Dickson said.

Curtiss is a sculptor who fashions large animal images from metal and wood. He'd like to keep his working materials in his loft (he works in a studio below), but the bat guano and bat urine can damage them. Curtiss showed Dickson scrap pieces of metal pocked with bat urine stains.

"The biggest problem for the homeowner is not the guano, it's the liquid," Curtiss said.

Dickson said bat urine is concentrated and potent. "A lot of times, you'll see on beams and things, it will actually start to crystallize because it is so concentrated. Between the heat and the concentrated form, it crystallizes very quickly."

So, earlier this summer, Denis Curtiss brought pails of ammonia to the barn loft. Bats hate ammonia, and they fled. Unfortunately, they fled next door to the Curtisses' house, which, as is typical of old houses, is far from airtight.

While Barbara Curtiss was lying in bed one night, a bat flew into the bedroom. She screamed and pulled the covers over her head.

Coexist? "If I don't have to see them," she said. "I want to be bat-friendly, but something in the core of my being freaks and shrieks."

Meanwhile, she and her husband noticed that guano had begun to trickle down into the living area of the house through a crack next to a set of fold-down attic stairs. Something would need to be done.

Dickson said it is important when trying to evict bats from a home or building to think where they might go next. "I strongly recommend that folks think about those things before they randomly boot them out of where they are. You can make a situation worse." The Curtiss situation, she said, was "a classic case."

Next, Denis Curtiss brought pails of ammonia up to the attic of the house to give the bats the boot once again. The bats took off - and went right back to the barn, where they remain.

Dickson said one way Curtiss might protect his supplies, while still accommodating the bats, would be to install a barrier above the rafters, like another floor, that would confine the bats to the highest peak of the roof and prevent guano and urine from landing on sculpting materials.

Curtiss noted immediately that the guano and urine would still collect and have to be removed.

For homeowners with bats, the state has a number of suggestions, including so-called exclusion and bat-proofing measures. One of the simplest measures is to let the bats exit from the house or barn and then place a barrier over their access point so they cannot return. Do not do this from June to mid-August, however, because baby bats may remain in the house. They will die and decompose.

Another possible solution is a bat house, like a bird house, which have become more popular in recent years. Dickson said bats will sometimes leave a building and move to a bat house if it is properly built and placed.

But for the number of bats in the Curtiss barn, a major bat housing development would be necessary. There is such a thing.

Pennsylvania biologists have developed a bat "condo" design - 8 feet by 8 feet is one size - capable of housing more than 6,000 mother bats and their young. (The male bats, Dickson says, tend to hang out in smaller groups, often just a few of them.)

These bat condos have "been used "in many places throughout the Commonwealth, and they work wonderfully," said Jerry Feaser, press secretary for the Pennsylvania Game Commission.

He said many property owners like the Curtisses had successfully installed the condos. "This is also an excellent way for some communities to have some type of mosquito or other bug control by utilizing bats, which are natural predators to these insects," Feaser said.

Bats can make a substantial difference in bug populations, Dickson said, and Curtiss is proof.

"I've got bats," Curtiss said. "But I don't have mosquitoes."

"We can go out in the evening and never see a mosquito." But in a neighbor's yard a few hundred feet away, "if you sit out at their picnic table, you'd be eaten alive."

Still, Denis Curtiss said, "It would be nice to be able to use my barn a little more."

A discussion of this story with Courant Staff Writer Steve Grant is scheduled on New England Cable News each hour today between 9 a.m. and noon.

Information on controlling bats is available from the state Department of Environmental Protection's non-harvested wildlife program, Sessions Woods Wildlife Management Area, P.O. Box 1550, Burlington, CT 06013-1550, or by calling 860-675-8130 The information also is at http://dep.state.ct.us. Click on Recreation and Natural Resources, then wildlife.

This story has been posted in the following forums: : Headlines; Sculpture; Bats; Animals; Humor