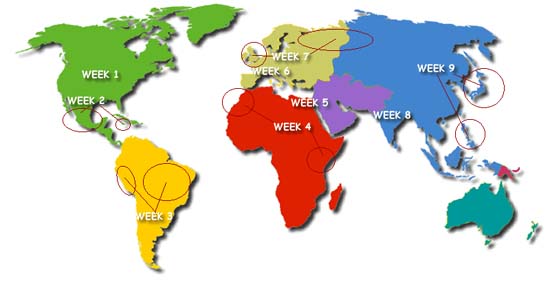 Email
pressoffice@
peacecorps.gov
WASHINGTON, D.C., August 24, 2004 – They tried on various clothes, like kimonos and Russian fur hats. They played instruments ranging from drums to tambourines. They recreated flags from southern Africa and South America. And in the end, the participants of the Kids for Peace Camp walked away with a little better understanding and respect for other cultures.

Friday, Aug. 20, the Paul D. Coverdell Peace Corps Headquarters and Peace Corps staff hosted over 40 students, ranging from age 6-14, who have spent much of the summer learning about the similarities and differences between world cultures.

Mary Hilton, who directs the camp, said she partners with the Peace Corps because the staff – many of whom are returned volunteers – knows the cultures of the world better than just about anyone. Hilton said she started the camp after 9/11 because she realized that many Americans don’t understand the cultures and attitudes of the rest of the world.

At the culminating field trip to the Peace Corps on Friday, participants learned world culture in an interactive way at five stations: musical instruments, flag creation, storytelling, games and outfit dress-up. During the events, children could be seen trying to carry a tune on various instruments, cutting out stars to complete their flags, or attempting to out think their peers as they jumped in and out of two parallel sticks being moved together and apart by fellow participants. And when they grew tired, the youth took a break by listening to stories from Tibet and other countries. All the activities were geared to help students gain an appreciation for the tradition of other cultures.

This year, the Kids for Peace Camp expanded to reach students in Columbia, Md., as well as in Towson, Md., where the camp first began. While the campers can choose to attend for as short as a week, the full camp runs for nine weeks. The participants learn through field trips, cultural activities, sports, and cooking. While most of the campers are local, Hilton said that the diversity of the participants is another piece in helping them understand different cultures and attitudes. In addition, many of the counselors hail from other regions of the world, from as far away as Nigeria to Brazil, and thus, bring new perspectives to the students.

It is Hilton’s hope that the camp opens the participants’ eyes to future cultural learning opportunities – opportunities that may one day, when they are older, possibly include being a Peace Corps volunteer.

This story has been posted in the following forums: : Headlines; Youth Programs; The Third Goal