Senator McCain says "I think we should expand the Peace Corps" 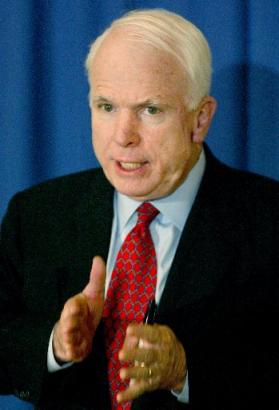 Senator McCain says "I think we should expand the Peace Corps"

Following his speech at the Republican National Convention in New York Monday night, Sen. John McCain talks with Jim Lehrer about his role in President George Bush's reelection campaign, his relationship with the president and Sen. John Kerry, and the war in Iraq.

Expanding all Americans' role in Iraq


MARK SHIELDS: And that is -- you said in the speech, "sacrifices borne and not shared equally by all Americans." Doesn't war demand inequality of sacrifice? I mean, everyone we see - and this is a war that I mean regardless of how you feel, the sacrifice has been borne exclusively by those in uniform, their families, while the rest, they're financing it with tax cuts. I mean how do you say that isn't a great American tradition of collective sacrifice?

SEN. JOHN McCAIN: I think the reason why the wounds of the Vietnam War are still so open, perhaps even worse than you and I had imagined having lived through it is because of the inequality of the Vietnam War. We asked our poorest Americans to go out and fight while many of the others did not.

This story has been posted in the following forums: : Headlines; Politics; Congress; Expansion