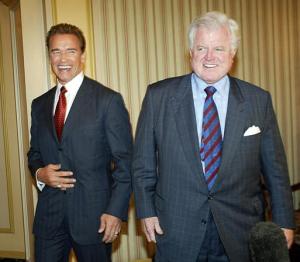 FREDERICK MELO
staff writer
NEW YORK - He's been labeled a political oddity, a womanizer, a centrist and an icon.


California Gov. Arnold Schwarzenegger addresses the delegates at the Republican National Convention last night in New York City.
(Associated Press photo)
Almost as talented at reinventing himself as Madonna or David Bowie, California Gov. Arnold Schwarzenegger didn't make it to the helm of one of the world's largest economies last year on a whim. And "Arnold", an unlikely addition to the Kennedy family, didn't achieve headliner status at the Republican National Convention last night by accident.

And he didn't do it alone.

His marriage to Maria Shriver, niece of Sen. Edward Kennedy, made him part of one of the nation's most powerful political families, albeit the wrong party.

Shriver, a part-time broadcaster who married Schwarzenegger 17 years ago, helped build her husband's political currency and smooth over his rough edges in ways that aren't always obvious, say observers. And her own political profile - often overshadowed by the tenacious, Democratic crusaders of the Kennedy family - only benefits as a byproduct.

She is the daughter of Sargent Shriver, founder of the Peace Corps, and Eunice Kennedy Shriver.

Calls to members of the Kennedy family were not returned last week, and Schwarzenegger's aides have been shielding him from pre-convention interviews for days. Disappointed cameramen trudged off the convention floor yesterday morning, after realizing that the governor's microphone check had been conducted the night before.

But it's clear the political gulf between Schwarzenegger and the Kennedys isn't as great as one might imagine.

"In summer 2003, my cousin Maria Shriver's husband, Arnold Schwarzenegger, approached me out on Cape Cod," writes Kennedy in his new book, "Crimes Against Nature: How George W. Bush and his Corporate Pals are Plundering the Country and Hijacking Our Democracy."

"He was determined, he said, to be 'the best environmental governor in California history,'" wrote Kennedy, who worked with the future governor on his environmental platform.

"The Kennedy family recognizes in Arnold, at least in so far as his public persona, a Republican that has an open mind," said Blitz, co-author of "Why Arnold Matters: The Rise of a Cultural Icon," and a professor of thematic studies at John Jay College/City University of New York.

"Ted Kennedy, he has a real affection for Arnold. He really sees Arnold as someone who, if you've got to deal with a Republican, at least he has the softening touch of a Maria Shriver at his side."

To some, Schwarzenegger, who is known to fly his plane to the Cape to visit his in-laws, has become a surprising symbol of political moderation and bi-partisanship. "They got Ted. We got Arnold," said Ernie Virgilio, a GOP activist from Mashpee. "It's interesting."

It was no coincidence this week that Schwarzenegger shared top billing with soft-spoken Laura Bush last night, just 24 hours before Gov. Mitt Romney. Aside from representing largely Democratic states in a race where swing voters are a hot commodity, political observers note, the two governors embody the RNC's central theme - "compassionate conservatism."

From pumping up after-school programs to his promise to respect gay marriage rights if they are upheld by the courts, his approval ratings in California are soaring, driven in part by his moderate stances on social issues.

"Arnold has been a breath of fresh air," said Jeff Bissiri, chairman of the Log Cabin Republicans of California, a gay rights group. "He ran a perfect campaign. If Republicans would only follow his model, they would win statewide."

"He's self-effacing strategically, and I suspect some of that comes from his marriage to Maria Shriver," Blitz said. "In some ways, no one ever believes that (self-deprecation.) ... Everything he does is designed to make himself grow larger."

And it would be silly to overlook Schwarzenegger, the arrogant physical powerhouse who once went AWOL from the Austrian military to compete in - and win - the Jr. Mr. Europe bodybuilding competition. His penalty, borne proudly: a week in jail.

But the governor and first lady of California are relatively new roles for the power couple.

"He's a noble savage, and she loves pumping up that image of him," said Blitz, referring to the monstrous ego and near-perfect physique that were made famous years ago in the bodybuilding documentary "Pumping Iron."

"I think Maria Shriver's currency is very high in terms of being able to keep a lid on him in ways that nobody else can," Blitz said. "They're a really, really tight couple."

And the darkest side to this love affair?

"I suspect that Maria kind of grits her teeth ... over his public image as a womanizing, skirt-chasing, possibly abusive sexist," Blitz said.