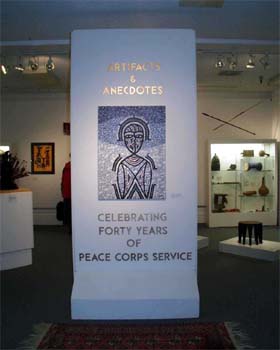 The Tribune The last time Martin Kaplan visited Somalia, he was impressed to learn that “the words ‘Peace Corps’ were still like magic.”

Never mind that the Peace Corps was thrown out of the country more than 30 years ago, by a military dictator.

To Kaplan, the lasting enthusiasm shows the power of the Peace Corps experience. Kaplan was one of the nation’s original Peace Corps volunteers, serving in Somalia from 1962 to 1964. Now he is trying to establish the first Peace Corps museum, in Portland.

Kaplan was a 24-year-old chemist working for Richfield Oil Corp. in Southern California when he decided to heed the call of President John F. Kennedy and become one of the newly formed agency’s “good will ambassadors.”

When he learned he was to be sent to Somalia, he wondered, “Where in South America is that?”

The East African nation had just gained its independence from Italian and British colonial rule. The majority of its people were nomads. There was exactly one academic in the United States who had researched Somalia, and he lived in New York City.

So Kaplan and his new colleagues went to Greenwich Village to learn more about where they were going and what they were going to do. Before long he was living in the highlands near the border of Ethiopia and Somalia, teaching English, science and math to prospective teachers.

From there he was transferred to the desert. The topography — brown sand and thorn trees — and a diet of sheep’s meat and the occasional camel burger were not the stuff of postcards. But Kaplan says he gained experiences and made friendships in Somalia that he’ll value the rest of his life.

When he gets together with other returned Peace Corps volunteers, he says, “there are no years that separate us once we start talking.”

Kaplan, a semiretired chemist and attorney who lives in West Linn with his wife, Francis, and teaches part time at Portland Community College, is president of the Committee for a Museum of the Peace Corps Experience. He says a museum would help fulfill one of Kennedy’s original goals for the agency: to promote a better understanding of other people and cultures. With the agency’s more than 165,000 returned volunteers, he argues, there are plenty of artifacts, photographs and stories to form compelling exhibits. And Portland would be the obvious location, since the city boasts the largest concentration of returned Peace Corps volunteers in the United States, according to Kaplan.

The committee was incorporated as a tax-exempt nonprofit in 2000 and has won several small grants, but nothing substantial enough to secure a building. Kaplan says the group’s next goal is to raise enough money to hire a museum expert to put together a detailed, professional plan.

In the meantime, Kaplan is looking forward to an upcoming reunion in Hawaii. It will be the sixth reunion he’s attended with fellow returned Peace Corps volunteers.

This story has been posted in the following forums: : Headlines; Museums; Third Goal