Colin Powell says we want to help Africa with financial assistance, with Peace Corps expansion, and with programs to deal with HIV/AIDS 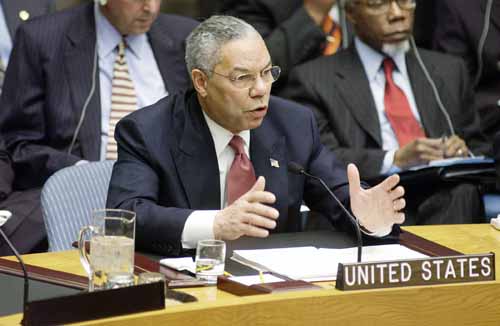 Colin Powell says we want to help Africa with financial assistance, with Peace Corps expansion, and with programs to deal with HIV/AIDS

Africa is a vital continent of great and growing importance to the United States, Secretary of State Colin Powell told American students September 17, reminding them that "Africa is never, never, not a priority" for him, for the United States government, or for the people of the United States.
Subscribe to AllAfrica

Addressing the "Teach Africa Youth Forum" at the State Department in Washington -- where the more than 1,000 student-participants greeted him with a standing ovation -- Powell said Africa "is a part of the world that I care about very, very much [and one that] President Bush cares about very, very much."

While citing Africa as a continent of great potential, Powell quickly cautioned that it also has challenges and problems that need more attention from the rest of the world, and wars, such as those in Sudan, Liberia and the Congo, "that have been going on too long" but are slowly coming to an end.

Powell told the students Africa takes up "a great deal" of his day, illustrating his point by revealing that he had devoted almost half a day, every day of the previous week to the problems of Sudan.

"We have a terrible situation in a place called Darfur," he told the students, "where people have been under assault," having been caught in a war between the government and rebels in the region.

More than 1 million residents of Darfur have been displaced from their homes and are living in camps, Powell told his audience, and a large part of his time has been spent working with allies and agencies to get them food and shelter and to make the area secure enough so they can return to their homes.

The secretary of state reminded the students that the United States is continuing to work with all African nations both individually and collectively to help them meet their diverse needs. Even as the United States is striving to bring peace to the continent, he said, "as we have done so often in our history and in so many other places in the world," the United States is "reaching out to help those nations of Africa that are committed to democracy and to the free enterprise system, who want no more corruption, who want the rule of law to dictate how they will do their business.

"We want to help them," he said, with financial assistance, with Peace Corps expansion, and with programs to deal with HIV/AIDS.

At the same time, Powell told the students, "We're reaching out with programs such as the African Growth and Opportunity Act [AGOA] ... which essentially breaks down barriers to trade and gives African nations greater access to our markets ... so they can sell us products and we can pay for those products."

This will help African workers make more money so that they are better able to provide for their families. "That's what trade does," he said, while calling for increased U.S.-Africa trade to complement assistance programs. "That's what this department [of state] is all about," he declared. "That's what President Bush has been all about for the last several years."

Responding to a student's question on the future of Sudan, Powell explained that the Unites States supports "keeping the Sudan intact as a nation. I think if Darfur were separated, it wouldn't be economically or politically viable as an entity. And so, we are looking for political reconciliation between all of the parties."

For the last couple of years, he said, the United States has worked hard to achieve political reconciliation between the north and the south, between the Khartoum government and the SPLA movement of John Garang.

The "Teach Africa Youth Forum," sponsored by the Africa Society and the World Affairs Council, aims to educate students about the African continent through innovative programs, exposure to U.S. and African leaders, and the opportunity to meet with Africans from different countries and backgrounds.

This story has been posted in the following forums: : Headlines; State Department; Expansion; Diplomacy