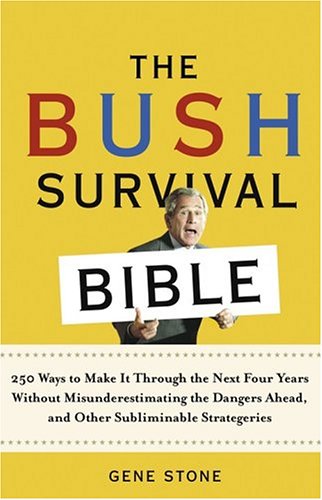 Stop the presses! No, really. Stop them.

Well, we all know the answer. Its appropriately lame press release, sent out to publications everywhere, comes after the jump.

250 Ways to Make It Through the Next Four Years Without Misunderestimating the Dangers Ahead, and Other Subliminable Stategeries
by Gene Stone

Villard will rush to stores within one week of November 2nd an essential guide for those who are less than pleased with the 2004 election results.

It IS funny. Bushisms, such as the ones listed above in the book’s subtitle, make us laugh, especially if you voted for Gore and Kerry. However, after another Bush victory, you are less likely to find as much relief from the subject/verb disagreement, the invented words, and the general bizarreness of Dubya’s speech and thoughts. So while THE BUSH SURVIVAL BIBLE is filled with humorous material and lots of it, its main message is a serious one: now more than ever is not the time to disengage, to grow more apathetic, to be an armchair Democrat or a mortified Republican whose vote for Kerry didn’t, in the end, make a difference.

So most importantly, THE BUSH SURVIVAL BIBLE is an essential guide to help you cope and fight back. This upbeat, forward-thinking, realistic book shows you how to channel your anger in a positive direction. Ranging from the comical to the practical, some sample topics covered are:

** Advice on how to get involved with local politics

** Groups to join such as MoveOn, Wellstone Action, and Democracy for America

** What is Post-Election-Stress Disorder (PESD)?

** What anti-depressants would be best for PESD?

** Would getting a pet help PESD? And if so, which breed: Saint Bernard or a Shih tzu? What about a cat?

** So you’ve got PESD really bad? In these pages, a medical expert weighs in on the possibility of hypnotizing yourself into believing that Kerry won.

** Not into hypnotism? Pack your bags and move to another country. Find out details about visas to welcoming countries that Bush hopefully won’t bomb.

** Get expert medical advice from Mark Liponis, M. D., who writes on how to fight panic and monitor blood pressure. He also suggests that men bank their sperm in order to protect them from four more years of damage under Dubya’s lax environmental laws.

* Learn about historical figures who are actually worse than Dubya, such as Ivan the Terrible, Pol Pot, and Toms de Torquemada, who in 1483 promoted the extensive use of imaginative forms of torture, including bloodletting, foot roasting, the rack, and suffocation.

** Learn about contemporary American politicians who are actually more frightening than Dubya, such as Richard Barrett, founder of the white supremacist Nationalist Movement, Alan Keye, Republican candidate for US Senate, who said, “Christ would not vote for Barack Obama,” and Patrick Johnston, a vice chairman of the Ohio branch of the far-right Constitution Party, who said, “I support and endorse the criminalization of homosexuality, and believe the issue of whether gay Americans should be executed is a decision best left to the states.”

So, you see, the next four years are not the end of the world. Some perspective helps. There are politicians who are worse than Bush, and there are many Democrats on the rise. There are things you can DO, and organizations you can join. With some relaxation techniques, a new pet, a copy of THE BUSH SURVIVAL BIBLE, and possibly some psychiatric drugs and an extended trip to another country, you WILL be OK!

ABOUT THE AUTHOR: Gene Stone, a former newspaper, magazine and book editor, has collaborated on more than twenty books and has written articles for Esquire, GQ, Premiere, and New York magazines. A graduate of Stanford and Harvard, and a former Peace Corps volunteer, he lives in New York with his cat, a black-and-white Democrat named Gus.

This story has been posted in the following forums: : Headlines; Election2004; Humor