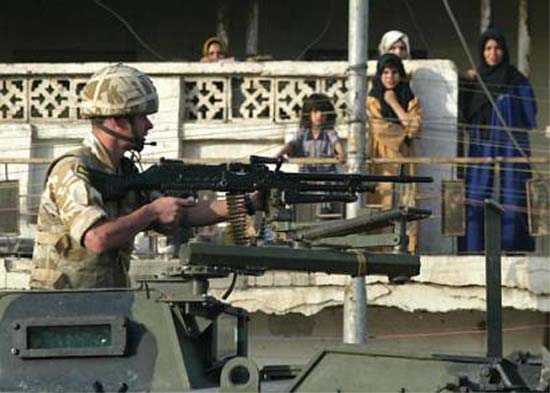 By Jeff Wright
The Register-Guard

Under military escort and the cover of darkness, Kathy Pyfer of Eugene made the 16-hour bus trek to a remote Guatemalan village with other Cascade Medical Team members last year.

Despite the risks, she plans to join the medical team a fourth time when it returns to strife-torn Guatemala next spring. "It's worth it, because there's no better feeling in the world than to help people who are needy and appreciative," she said.

But don't ask Pyfer to export her humanitarian instincts to Iraq - at least not anytime soon.

"We don't know who's on our side over there and who isn't," she said. "I'm not personally willing to risk my life for the sake of theirs at this point. It just feels too out of control."

Pyfer's view is shared by other local do-gooders who say the risks in Iraq - where a new videotape appears to show the slaying of British humanitarian Margaret Hassan - are too high. More than 170 foreigners have been kidnapped in Iraq this year, with Hassan among more than 30 murdered.

Weighing the plight of those in need against volunteers' safety is a constant challenge, said Barbara Agnew, spokeswoman for the Portland-based Northwest Medical Teams, which sends doctors and nurses to hot spots around the world.

One team was pulled from Iraq in June after an 18-month stint, but for financial rather than safety reasons, Agnew said. The team was serving in the Kurdish north away from most of the warfare in Iraq.

But another medical team was pulled from Afghanistan in 2002, Agnew said, after a humanitarian worker was killed there. A team currently in Liberia had to suspend work for several days because of looting-related violence, she said.

Northwest Medical Teams has not lost a volunteer in 25 years of existence. Part of the reason, Agnew said, is its insistence on always working with a local partner or organization that knows the cultural milieu.

"People attracted to this work are not feint-hearted," she said. "They're intuitive, smart and quick-witted - but they're not reckless."

Vivian Nash of Eugene said she'd go to Iraq if asked - so long as she were convinced that reasonable precautions had been taken, and that she could make a real difference. Nash and her husband, Jerry, served in the Dominican Republic as Peace Corps volunteers 15 years ago, and more recently have visited Nicaragua and Africa on behalf of Outreach International, a Christian anti-poverty group affiliated with the Community of Christ denomination.

"Neither of us have worried about the risks we've taken," she said. "You just can't, if you're going to be out there helping people."

But Van Bebber said she would personally decline any offer to help in Iraq.

So would Tamra Orlando, a Springfield nurse who's traveled with Cascade Medical Teams. In Guatemala, she said, medical staff are revered as miracle workers. But in Iraq, "there doesn't seem to be any immunity," she said. "As long as you're white and American, you seem like a target."

Few local residents have traveled to as many countries as Jim Hayfield, a Eugene nurse who's made 20-plus humanitarian treks over the years - from helping survivors of ethnic killings along the Macedonia-Kosovo border to assisting a tribe in Peru known as the last to shrink heads in the Americas.

It only takes a small radical element to disrupt a country to such an extent that humanitarian aid becomes all but impossible, Hayfield said. That appears to be the current situation in Iraq, he said.

This story has been posted in the following forums: : Headlines; Iraq