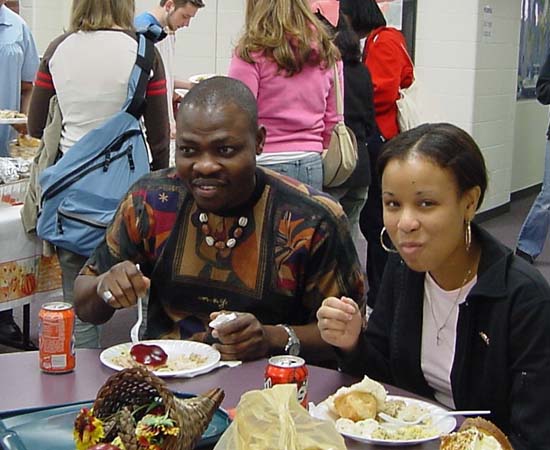 Foreign studgents get taste of America

TROY - A group of former and current Peace Corps volunteers from around the state gathered at Rensselaer Polytechnic Institute's student union building to offer more than 100 foreign students a taste of Americana - a feast of Thanksgiving fare fit for any red-blooded American - Saturday.

According to Steve Hoyt, president of Returned Peace Corps Volunteers of Northeastern New York, the second annual event drew more than double the number of hungry students and their families as last year's dinner. The volunteers, who served the dinner, were stationed in the students' home countries, as well as many others. A name tag bearing the country and dates of service were worn by the former Peace Corps members.

"Locally, we formed a group of returned Peace Corps volunteers, which extends from Massachusetts to Syracuse and from the Adirondacks to New York City," Hoyt said, adding that the group has about 100 active members and a mailing list of 430.

The Peace Corps, which is associated with the federal government, sends volunteers overseas for two years to teach, work on forestry or environmental projects or perform other humanitarian service, Hoyt explained.

"The way we figure it, we've been hosted by people in other countries, and we'd like to return the hospitality we received. Last year, we had about 65 students attending. This year, 158 signed up," he said.

Most of the students were from Asia, though others were from Russia, the Philippines, Spain and other nations. The holiday staples that fed them were donated by the volunteers as well as Price Chopper and Hannaford Bros. supermarkets and Goold Orchards of Schodack.

The event itself was organized by Harry and Joan Thornhill. The couple accepted the responsibility last year but said they were somewhat blown away by the task of feeding this year's much larger turnout.

Notices were sent to donors, asking them to please double their contributions, the couple said.

Six turkeys, pounds of mashed potatoes and vegetables, breads and desserts were given. Vegetarian entrée choices were offered as well as not all groups eating that day typically consume meat.

Harry Thornhill served in Liberia from 1964 to '66, and the couple brought their family to Sierra Leone in 1980 and '81. This January will find them in Ghana, where they will teach for three months.

This story has been posted in the following forums: : Headlines; Thanksgiving