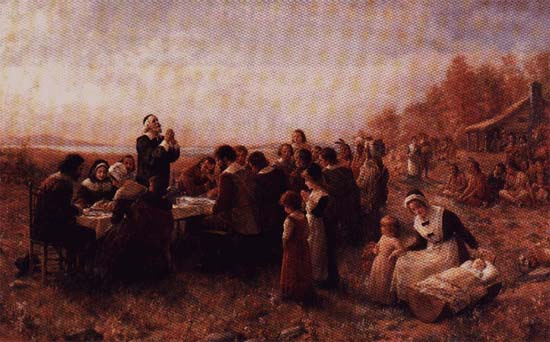 Giving thanks: For Pilgrims

Giving thanks: For Pilgrims, papayas and art of compromise

In 1621, a band of weary survivors celebrated their meager harvest with their newfound friends and gave thanks.

It had been a hard year for those we now call the Pilgrims. They'd arrived the previous December on Plymouth's rocky shores after 9 1/2 perilous weeks at sea. One hundred idealists escaping religious persecution, they were now free to worship as they pleased, but were sadly unprepared for the challenges. The harsh winter and environment took their toll and by spring, a shocking half of the Pilgrims had died.

However, when given the choice to admit defeat and return to England with the Mayflower, everyone left decided to stay.

In 1985, I had a few things in common with the Pilgrims. With a band of 30 other idealists, I left Kansas to join the Peace Corps in Gabon, Central Africa. Initially fired by enthusiasm, our numbers quickly diminished due to disillusionment, homesickness and health issues. Within six months, a third had returned home.

At my post, an aching homesickness replaced bewilderment, as I taught English at the local high school. My white skin stuck out like a beacon, and whispered stares accompanied me everywhere I went. The students seemed to find my teaching efforts entertaining rather than educational, as I struggled to maintain discipline.

November came, and my homesick thoughts turned to the approaching Thanksgiving holiday. Back home, Mom's delicate china would adorn the linen tablecloth and the rich smell of slow-roasting turkey would pervade the air. Laughter would fill the dining room as ravenous eaters stuffed themselves into a stupor. As I reminisced in Gabon, sweating and slapping at mosquitoes, a longing for home engulfed me.

Clinging to memories, I decided to host my own traditional Thanksgiving dinner. My announcement to the other Peace Corps volunteers, however, was met with skepticism.

"Where are you going to get a whole turkey?" was one response. "Last year, we just drank beer," was another. "The rest was too much work."

I was further disheartened when I perused the local store. No whole turkeys, only the wings. No fresh vegetables and no potatoes, only local tubers. Not a chance of a pumpkin.

"Forget it, then!" I later exploded to one of the volunteers, as we sat at a neighborhood bar. His Gabonese friend took pity on me.

"But does it have to be a traditional dinner?" he asked. "Well, that's the point, to do it the way it's always been done, with the turkey and stuffing, mashed potatoes and pumpkin pie," I replied.

"Maybe if you compromised, you'd have better luck," he gently observed.

His words struck a chord in my heart. As I mulled over them the following week, I observed my actions more clearly. Maybe in the classroom, my expectations were based on my culture. Applying only American ideals to this foreign soil was causing me to fail. Perhaps this was the realization the Pilgrims also had in the spring of 1621. 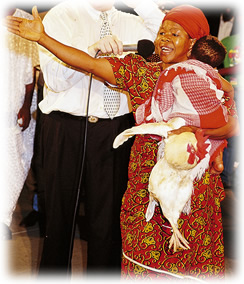 So compromise it was. I sought the advice of the Gabonese teachers at the school. I threw out the British lesson book that taught words like "vicar" and "perambulator", replacing them with "market," "pineapple," "rooster" and phrases like, "Have you got any yellow bananas?"

Thanksgiving dinner, I decided, was next. It would include turkey wings, mashed local plantain bananas and sliced mangoes. For pumpkin pie, I planned to boil green papayas from the local market, spice them up and proceed with the traditional recipe.

On Thanksgiving afternoon, I was too busy with preparations to be homesick for family. In my rickety house, I pushed the wobbling dining table up against the desk and flung a bed sheet over them. Stubby candles sat atop tin cans.

My guests arrived, American and African alike. The immediate multicultural camaraderie warmed me. After cocktails of local beer, I lit the candles and invited my guests to sit on the chairs and stools that leaned toward the table. The Thanksgiving feast was not like any I'd had before, but it was a reassuring combination of home and my adopted culture.

"I've never had turkey wings prepared this way before," said one Gabonese guest. I thought of the first Thanksgiving dinner, where the Pilgrims cooked unfamiliar food with familiar recipes. Maybe a Native American invited to the feast tasted a dish and said, "Hey, I never thought of doing that with corn before."

When the green papaya pie was served, I watched everyone's expression as they took the first bite, trepidation changing to amazement. "This tastes just like my Mom's pumpkin pie!" one of the volunteers exclaimed. "How did you do it?"

Tears stung my eyes, and at that moment I felt happier than I'd ever felt in Africa, more fulfilled by Thanksgiving dinner than ever before. For the first time, I truly gave thanks: for friends, for bounty, for opportunity.

At this year's holiday, in addition to celebrating, we Americans still will be mourning the deaths of fellow citizens and our once more carefree way of life. Within many of us lies an unsettling fear, not knowing when we will be attacked again by people who threaten our lifestyle and values.

Yet, the Pilgrims also knew all about living with insecurity. In spite of it, they managed to focus on what they were thankful for: good health and the fruits of their labor, for friends still living and the good will of new friends who'd crossed over the cultural barrier.

I think I'll make it my goal this year to try and give thanks for the same things. I want to cross over the new cultural barrier that some would have us believe is insurmountable. Maybe it will be something as simple as serving couscous with dinner, or inviting foreign friends to share our table.

But regardless of what I eat or with whom, I'll pause to remember those who have gone before us. And I'll give thanks.

Terez Rose is a writer who lives in Boulder Creek, Calif.

This story has been posted in the following forums: : Headlines; COS - Gabon; Thanksgiving