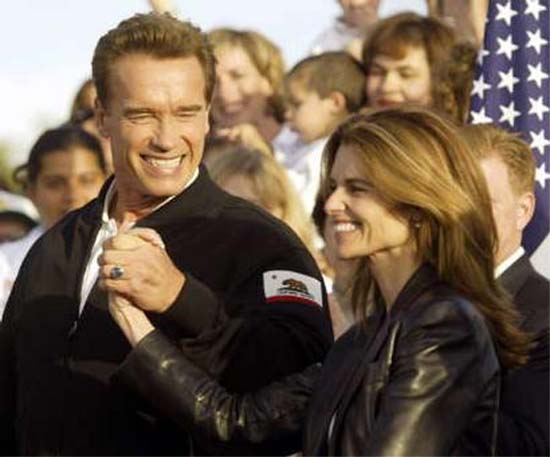 SACRAMENTO, Calif. - (KRT) - A year after then-candidate Arnold Schwarzenegger was accused of sexually harassing women, Maria Shriver reveals it was a "flat-out tough, painful" period in which she protected their four children by keeping the television off, the newspapers away and escaping to Cape Cod.

In a Vanity Fair cover article that features California's first couple dressed in Prada on the back of a motorcycle, Schwarzenegger says stories about his alleged groping "helped my campaign," but that he has learned his lesson about harassment.

"I now know what can be said and what can't," he tells Marie Brenner in the January issue that hits newsstands in New York Wednesday. "Now I would not even tell someone I like their outfit. It could go south."

The wide-ranging interview with California's governor and his wife, accompanied by romantic Malibu beach shots by photographer Annie Leibovitz, touches on the couple's bipartisan marriage, the burdens of being a member of a famous political family and the recall election.

The story reveals a little-known hobby of the former bodybuilder and movie star - painting - and that a portrait of Schwarzenegger in the buff by a better-known artist, LeRoy Neiman, hangs in the entrance hallway of the family's Brentwood mansion.

Schwarzenegger calls Shriver's relatives "clones" because everyone "thinks exactly the same." Shriver says that her husband "does not like to read" and that people assumed she would marry a preppy Ivy Leaguer like John Kerry.

And in case anyone questioned the couple's intimacy after Schwarzenegger joked that his Democratic wife withheld sex for 14 days after his rousing speech at the Republican Party's national convention in New York City, Shriver tells readers:

"After all these years we are still engaged with each other, hot for each other, into each other. There hasn't been a moment when I have been bored," she said. "All of my friends say, `I want what you and Arnold have.'"

But she says their 18-year marriage has taken work, and the article traces some of the difficult decisions and situations leading up to last fall's recall election.

Shriver, who grew up watching her uncles Jack, Bobby and Ted Kennedy, plan their runs for president, and the failed vice presidential bid of her father, Sargent Shriver, said she worried about the invasion of her family's privacy.

Still, in the final days before Schwarzenegger announced his candidacy on "The Tonight Show with Jay Leno," Shriver said she was encouraging her husband to run.

Then, just days before the Oct.7 recall election, the Los Angeles Times reported that 16 women said Schwarzenegger had groped or harassed them over a 25-year period. Schwarzenegger, who publicly apologized at the time, says in the "Vanity Fair" article that his poll numbers went up after the stories appeared because voters viewed them as politically motivated.

"Each time they came out with a story, it helped my campaign! It was just a matter of O.K., keep writing," he said.

It was then that Shriver took their children to Cape Cod and "got them out of this thing." She did not talk with the children - ages 7 to 15 - about the details of the allegations, but told them "some of it is true, some of it is not true. If you have any questions you should feel comfortable to talk to me about it."

When asked if she ever wondered if the women's stories were true, Shriver responded:

And how she copes with such adversity?

"I fight. I think, with everything, it goes back to struggle. You have to struggle in every aspect of your life," she said.

Shriver first met her husband in 1977 at a Robert F. Kennedy charity tennis tournament in which Schwarzenegger was playing. She was looking for someone independent from the East Coast preppies she'd been surrounded by her entire life. She found that in Schwarzenegger, whom she called "an explosion of fresh air."

"I wanted out of that suffocation. I wanted someone different. I married my authentic self."

"This is what she fell in love with - me," Schwarzenegger said. "This is the way I am - outrageous, out there. And it comes with things that are not all rosy."

Visit MercuryNews.com, the World Wide Web site of the Mercury News, at http://www.mercurynews.com.

This story has been posted in the following forums: : Headlines; Directors - Shriver; Politics