Obituary: Rosemary Kennedy was one of the inspirations for the Special Olympics 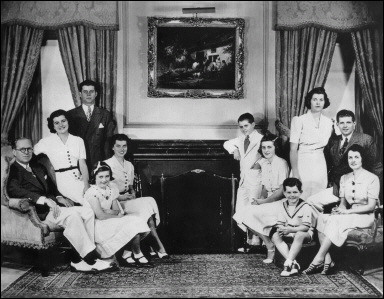 Obituary: Rosemary Kennedy was one of the inspirations for the Special Olympics

ROSEMARY KENNEDY was the unknown Kennedy, the hidden and virtually unmentioned member of the very public dynasty that was - at least until the arrival on the scene of the Bushes - the nearest thing in America to a royal family.

She was the third child of Joseph P. Kennedy and Rose Fitzgerald Kennedy, following "Joe Junior", the eldest, who died on service in the Second World War and the future President Jack Kennedy, assassinated at Dallas in 1963. Her misfortune was to be born - in 1918 - mildly mentally retarded, into a family dominated by her driven and ruthlessly ambitious father.

As a girl, Rosemary lived a relatively normal life. She kept diaries of her life in the 1930s, chronicling a privileged existence of tea dances, dress fittings and a visit to Franklin Roosevelt at the White House. When her father was US ambassador to Britain, she was presented to King George VI and Queen Elizabeth.

But her problems apparently grew worse as the Kennedys prepared to return home from London. Her father, fearful she might do something that might damage the reputation of a family for which he had huge ambitions, decided that she should undergo a lobotomy, a treatment then in its infancy but regarded as a miracle cure for mental illness.

The operation took place in 1941, but, according to the historian Doris Kearns Goodwin, "something went terribly wrong". Rosemary emerged not better, but far worse. She was moved between several private institutions before her father placed her in the St Coletta home in central Wisconsin, where she spent her last 57 years.

According to Goodwin, her mother Rose did not learn of Rosemary's lobotomy for two decades, until 1961, the year her second son was inaugurated the 35th President. For the ambassador, for whom power, success and winning were the only things that mattered, his eldest daughter was literally unmentionable.

The Kennedy biographer Thomas Reeves wrote of how Joe Senior's mistress the Hollywood actress Gloria Swanson once asked him about Rosemary. "Joe became enraged. `His blue eyes turned to ice and then to steel,' Swanson wrote later. Within seconds he was shouting, `I don't want to hear about it. Do you understand me, do you understand me?' Once Rosemary was institutionalised," Reeves wrote, "she did not exist, she was a loser."

Other members of the family, however, continued to visit her. Later she became one of the inspirations for the Special Olympics, founded in 1968 by her sister Eunice and Eunice's husband Sargent Shriver, activists in the field of mental retardation.

Her death leaves just four survivors among the nine children of Joe and Rose Kennedy. They are Edward Kennedy, the Massachusetts Senator and former presidential candidate, and her sisters Eunice, Patricia and Jean. All four were at her bedside when she died.

President Kennedy and all the rest of his family were a useless bunch of idiots who championed causes that led to the undoing of this country, like equal opportunity employment that lowered the country's standards and gave minorities the right to compete on equal footing without trying to improve themselves through education, etc., and the "hands-tied-behind-our-backs" politically-commanded wars that have killed so many of our youth.
The two shining stars were Sargent Shriver and his wife Eunice. Their contributions have been great and effective. God bless tham both.