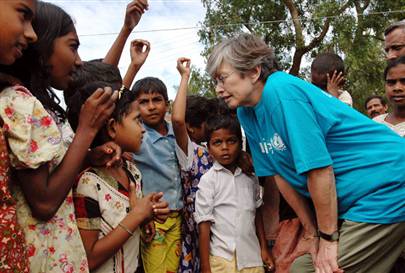 Carol Bellamy of the United Nations Children's Fund discusses the heartbreak she witnessed on a tour through tsunami-ravaged Asia, plus what’s next for the UN and its relationship with America

Caption: Bellamy (right) in Sri Lanka: ' We need to find out which children have lost their parents' Photo Shehzad Noorani / AP

Jan. 8 - After 10 years spent at the helm of UNICEF and with only four months to go before her term expires in May, Carol Bellamy thought that she had seen the worst. In its annual report published last month, The United Nations Children's Fund denounced yet again the ravages of wars and poverty on children, and the fact that, as witnessed in Beslan, Russia, children were increasingly becoming not just the victims but also the targets of the world's violence. If only her tenure had ended on that note, sounded days before the catastrophic earthquake and tsunami that has since crippled south Asia. Ten days after the disaster, Bellamy called "rather conservative" the staggering estimate that about a third of the tsunami's 155,000 victims are under the age of 18.

Even more unsettling was a recent Reuters report that a UNICEF worker in Kuala Lumpur received an unsolicited cell phone text message that offered to sell children according to buyers’ wishes. “Three hundred orphans aged 3-10 years from Aceh for adoption," the message reportedly read. "All paperwork will be taken care of. No fee. Please state age and sex of child required." Bellamy called the prospect of child trafficking "a real issue, but also one that existed before in the region. But it's true that there are bad people who tend to take advantage of bad situations and this is a very bad situation." NEWSWEEK's Marie Valla caught up with Bellamy after she addressed a special meeting of the European Council in Brussels to discuss what she saw on her recent tour of Indonesia and Sri Lanka. Excerpts:

NEWSWEEK: Ten days after the catastrophe, what's the latest update on the situation of children?
Carol Bellamy: We believe that children represent about a third of the victims and this is a rather conservative assessment. For one thing, children under 18 make up 30 to 40 percent of the population of these countries. And they have a higher potential of being victims. These are children for example who, although they live by the water, often have never learnt to swim.

The spectacle must be absolutely haunting. Is there any particular memory that sticks to your mind?
The scale is just unimaginable. I was in Sri Lanka. Half [of one] town had been washed away and there were five people near the water. I went down and asked why they were still there. They were just waiting for their children to come back. This was just heartbreaking.

Many steps are being taken to care for children. What do you think of Sri Lanka's decision to declare a moratorium on adoption?
I think it is a bit premature to talk about adoption. Ultimately we'll get to it but for the moment, we, that is UNICEF and the national governments, need to find out what the situation is, which children have lost their parents. We're talking about countries that have a long-standing and substantial tradition of extended family. So we need to find where there are some family members that can look after them. Right now we're working with Indonesia and Sri Lanka to provide registration forms for the children. I'd say it makes sense to have a moratorium until more is known about the status of the children, which really shouldn't take that long.

NEWSWEEK’s George Wehrfritz is with a relief boat touring Sumatra’s tsunami-devastated west coast. He reports from Padang on efforts to aid survivors

There is something disturbing about the fact that despite its scope, this disaster seems to have little impact on the world economy.
But that's not true for local economy of countries like Sri Lanka or the Maldives. The case may be different in Indonesia where the Aceh region counts for only 3 or 4 percent of the country's economy. It may not stop the world economy but globalization doesn't just have to be economic. It can be human. I was just at a meeting of the European Council and this is something you realize when you listen to representatives of the member states. A Swedish friend was telling me, “We haven't had a war for a hundred years but we had never seen anything like this.”

The UN has now firmly taken the lead in the assistance to the stricken Asian countries. Were you worried at any point that it would be marginalized?
I know that there were questions raised in the public debate but the main actor in humanitarian operations still remains the UN. There will always be some bilateral action but in the case of humanitarian crises, you'll always have the World Food Program, UNICEF or the UNHCR [United Nations High Commissioner for Refugees]. But the UN isn't running the operations here. It is lending assistance. It is the local governments who are running the rescue operations.

What should the role of the U.S. be? Can it improve its international reputation?
You know for all the talk about the difficulties between the UN and the U.S., the U.S. is still the largest donor to most UN humanitarian agencies. It is a major government donor to UNICEF. It is the U.S. helicopters that are out there. They're not the only player but they're an important one.

To what are you going to employ the four months you have left as head of UNICEF?
In my 10 years at UNICEF, I think that we have built a strong and efficient organization that has been able to play a key role as an advocate for children and that's whet we'll do for four more months. Obviously I hadn't anticipated this crisis. Some of our ongoing work is critical like our fight for every kid to have access to education, our fight against the AIDS/HIV epidemics. We can't ignore the other crises. But we can't underestimate the enormous scale of this crisis either. And I hope that UNICEF can keep on participating to the best of its capacities.

This story has been posted in the following forums: : Headlines; Directors - Bellamy; COS - Sri Lanka; Tsunami; United Nations; Unesco