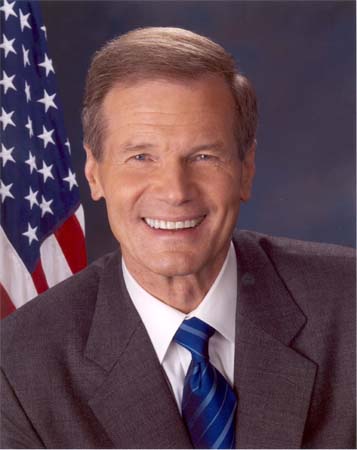 During the first term of the Bush administration, critics said the White House's focus on the war on terrorism after the Sept. 11, 2001, attacks and the Iraq war left diplomacy toward Latin America on the backburner.

U.S. senators Bill Nelson, a Democrat, and Mel Martínez, a Republican, both sit on the Senate Foreign Relations Committee and plan to use that platform to bring attention to the region.

"The United States has been all too absent in Latin America, and I think we can energize that," said Martínez, who served on Bush's cabinet as Secretary of Housing and Urban Development during the president's first term.

Nelson, who returned Saturday from a weeklong trip where he met with four countries' presidents, said the United States should continue to negotiate free trade agreements like the one worked out with Chile. But there is more that can be done, he said.

"We only have a few countries in Latin America where we have Peace Corps volunteers," Nelson said. "That's one of the best programs where Americans go as ambassadors. It all has to start with a commitment."

Nelson said he plans to press the issue this week during Senate confirmation hearings for National Security Adviser Condoleeza Rice, Bush's nominee for Secretary of State.

While acknowledging that crises like terrorist attacks, wars in Afghanistan and Iraq, and nuclear issues with North Korea have garnered a lot of attention,Bush administration officials have said they have not ignored Latin America. Officials point to free trade agreements and the $1.6 billion being spent in the region this year to strengthen democracy and fight corruption as examples of Washington's attention.

"President Bush is convinced that the Americas are critically important to our security and our well-being as a nation, and our goal is to build an inter-American community bound together by a shared commitment to freedom, the rule of law and prosperity through trade," said a State Department official, who did not wish to be named. But relations between the United States and Latin America have sometimes been rocky over the past four years. Venezuela's ties to communist Cuba have rankled the Bush administration. And the administration angered Venezuela when it briefly appeared to recognize a new government while President Hugo Chávez was temporarily ousted in 2002. In recent days, Venezuela once again has stirred concern with reports of the countrie's troops used to confiscate some large, private land holdings.

The relationship between Washington and the region also has affected American diplomacy in the rest of the world. Although a vote never took place, Chile and Mexico both appeared ready to buck Washington and oppose the United Nations resolution two years ago authorizing the use of force against Iraq. And Mexico has been sorely disappointed at the lack of an immigration accord with the United States.

Brazilian President Luiz Inácio Lula da Silva has led an effort by countries in the region to diversify their economic and political ties to reduce dependence on the United States. This May, for example, Brazil will host a summit of South American nations and the Arab League in an effort to forge closer economic ties. Latin American nations already have worked to get closer to Europe, China and Russia.

Nelson said that the way to get the Bush administration's attention is to talk about security. During his trip he visited the tri-border area where the frontiers of Paraguay, Brazil and Argentina meet, a region that some experts say is being used to raise funds for terrorist groups.

William LeoGrande, dean of the School of Public Affairs at American University in Washington, and an expert on Latin America, said it is always hard to get Washington to pay attention to places that are not immediate problems.

"It's hard for them to get past the tyranny of the inbox," LeoGrande said. "When you've got crises around the world it's just tough for senior level people to pay attention to routine diplomacy, as important as routine diplomacy may be."

Washington Bureau Chief William E. Gibson contributed to this report. Rafael Lorente can be reached at rlorente@sun-sentinel.com or 202-824-8225 in Washington.

This story has been posted in the following forums: : Headlines; Congress; Expansion