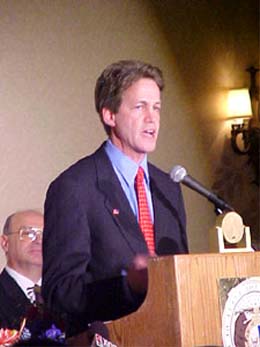 KUWAIT CITY, Kuwait - The meeting with 100 sheiks was going well - a good candid give-and-take with leaders of the Sunni minority in Iraq that are not exactly thrilled with the upcoming elections because they are sure to not win a government majority.

"It was kind of a like a town meeting back in our country, just like many held on the Iron Range, where people strongly voice their opinions," said U.S. Sen. Norm Coleman, R-Minn.

Then a shell exploded about 500 meters away, shaking the building in Baghdad where the meeting was being held.

"I’ll tell you, the Iraqi security people didn’t flinch. They just went about their business. It was just another day in Baghdad," Coleman said in a telephone interview with the Mesabi Daily News on Saturday.

The senator made the call from Kuwait City at about 2 p.m. CST, or midnight there, following his day in Iraq. He was to leave today for India along with a small delegation of U.S. senators that includes Senate Majority Leader Bill Frist to tour some of the tsunami-devastated areas of that country. The group travel will later in the week to Afghanistan.

Coleman left Iraq feeling good about the Jan. 30 elections, the first free and democratic ones ever in the country, despite what has been escalating violence.

"A United Nations official who will be helping with his 13th election told me that this is the best one he has seen as far as preparation by local officials. We certainly have violence problems in some areas, but that’s not the case in 14 of the 18 Iraqi provinces," Coleman said.

"The elections are going to happen and that is going to be good news for this whole area. There are great challenges, but the people are excited about the elections."

Coleman, who wore a flak jacket and helmet while in Iraq, also met with members of the Minnesota 134th National Guard unit and had dinner with some of them.

The senator said troop morale is high, but Guard members also voiced some of their concerns.

"The separation from family is of course tough. And there are also worries about whether their stay will be extended. But the overall morale is strong," Coleman said.

"These people take a lot of pride in what they do. And I am filled with pride for what they are doing and how they are handling it."

Bill Hanna covers politics and the IRRRB and writes editorials and columns. He can be reached by phone at 741-5544 or e-mail at bill.hanna@mx3.com.

This story has been posted in the following forums: : Headlines; Iraq; Congress