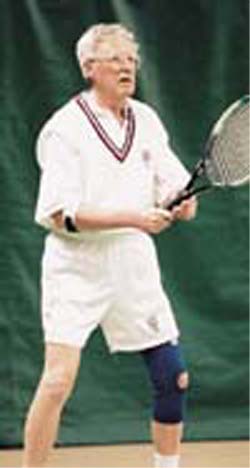 Uncovering the Mystery of Alzheimer's Disease

Five-and-a-half years ago, at age 57, Stuart Awbrey was cruising along in his job as editor of a weekly trade publication for the legal profession. Prior to that, he and his wife, Bev, owned and edited a suburban weekly newspaper.

"I had been experiencing some job-related stress," recalls Stuart, "but I assumed that my reactions to these demands were just part of the job. Imagine my surprise when Bev suggested to me one day that I undergo testing for my brain. Sure, I may have forgotten to send in a few checks, and perhaps I was having difficulty figuring out tips in restaurants, but I assumed that was just part of getting older."

What Stuart did not know was that Bev had been worried about him for about six months.

She had noticed that her husband was slowing down and having trouble processing information. A few times Stuart had sped onto a major highway without checking oncoming traffic and nearly caused a terrible accident. He began to ask directions to places previously familiar to him. All of these behaviors caused Bev to be concerned.

After several hours of psychological and neurological testing, Stuart was told that he had some mild to moderate cognitive deficits that were likely linked to Alzheimer's. He was advised to stop working and operating an automobile, for his own and others' safety.

"Knowing that I had a disease that would slowly kill me, I began to think of Alzheimer's as the silent bullet or my adversary," says Stuart. "I started to develop a plan about how I would meet this adversary, and I vowed that it would not be sitting down."

Just a few years ago, there seemed little hope of stopping Alzheimer's, a progressive, degenerative brain disease that has robbed the minds, memories and active lives of approximately four million Americans. With the aging of the U.S. population, experts warn that unless researchers discover how to prevent it, some seven percent of those over 65 might develop Alzheimer's by the year 2020 and that figure could rise as high as 15 percent by 2050.

At the time Stuart visited Dr. Saur, only one drug was available to treat the symptoms of Alzheimer's. However, Dr. Saur was directing a clinical trial for a new drug designed to slow the progression of the disease, and he felt that Stuart was a perfect candidate to participate in the national study.

Being diagnosed in the early stages of Alzheimer's and receiving the new medication has helped Stuart to accomplish many of the important goals he had set for the rest of his life. He has published a book, spends quality time with his family, travels, and has taken some courses. Since he no longer drives, he rides his bicycle and walks frequently. Stuart also continues to play tennis on a weekly basis.

Stuart's family believes that he may not have been able to do those things as well without access to the leading edge treatment he has received from Dr. Saur.

"It does appear that the medication has been beneficial in slowing the progression of the disease," observes Dr. Saur. "We are very optimistic about the research we are currently conducting at the Neuroscience Institute. Should this new drug continue to prove effective, it will give hope to millions of Alzheimer's patients and their caregivers. Within the next decade, we're hopeful that Alzheimer's will become a manageable chronic illness, much like diabetes or asthma. In so many ways, Stuart has been a real inspiration to all of us."