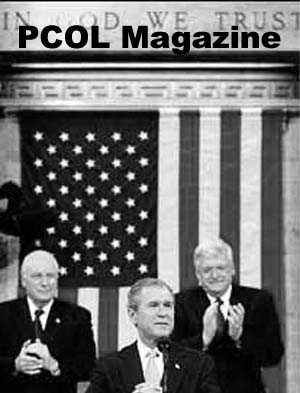 President Bush today will launch a sustained public effort to raise interest in community and national service, selecting a model volunteer to showcase at each stop he makes across the country.

White House officials say the use of the bully pulpit to promote service is intended to expand volunteerism, which has grown since the Sept. 11 attacks and Bush's call during his State of the Union address for each American to dedicate two years to community or national service. Applications to join the Peace Corps and the national service program AmeriCorps were up about 50 percent last month after Bush announced plans to expand the two programs.

The notion of drawing media attention to an individual at each stop is modeled after Bush's use of "tax families" during the presidential campaign to illustrate the effects of his tax cut. But while the tax families were used to strengthen Bush's argument in a partisan debate, the promotion of exemplary volunteers is intended to promote national unity through service, officials said.

Bush will meet his first volunteer, 83-year-old Willard Gove, in Minneapolis this morning as he gets off Air Force One. Bush will take Gove in his motorcade to a speech at a high school. Gove, a decorated World War II veteran,is a full-time volunteer. He has done radio broadcasts for the blind, mentors for Junior Achievement, is building two soccer fields for children on reclaimed factory land, serves on several community boards and works on a national volunteer program for fellow Honeywell Corp. retirees.

"I try not to say yes to money-raising because I don't have any money, but if somebody asks me to do something, I do it," said Gove, who starts volunteer work at 7:30 a.m. and goes until 4 p.m., not including evening work. He believes the work keeps him young. "If you go to Sun City and play golf and drink martinis, you won't last very long," he said.

It's an indication of the nonpartisan nature of Bush's effort to showcase volunteers that his first choice, Gove, is a yellow-dog Democrat. "It's a big joke in my family because we're all a bunch of Democrats," he said. "They think I'm crazy and I'm quite convinced I am." Gove is particularly amused that Bush will take him to a downtown Minneapolis fundraiser for Republican Senate candidate Norm Coleman; Gove supports the Democratic incumbent. "I'm a Paul Wellstone guy," he said. "But if they want to give me a free ride around town, my kids will raise hell with me, but that's okay."

Still, Gove supports Bush's bid to boost national service after the September attacks. "I think that's right, and I'm sure he can. It's good for people and good for the country. This world is so screwed up we need all the help we can get."

Aides say Bush will feature a volunteer on virtually each stop much as he did with his "tax families." The tax families brought increased local coverage for Bush's tax plan. "These good folks pay $3,500 of income taxes now under the current tax code," Bush said at a typical stop. "Under my plan, they're going to receive a $1,660 worth of tax savings -- as real money, to go in their pocket. Under my opponent's plan, they'd receive a whopping $145."

This time, aides hope to bring more attention to local volunteer projects and to recruit more volunteers. In the coming months, the administration plans to tout programs by which Americans can perform the 4,000 hours of lifetime volunteer service Bush suggested in his State of the Union address. "What the president wants to do is turn a moment of tragedy last September into an era of service for our nation," said Jim Wilkinson, the White House deputy communications director.

The White House said the Web site for its new service initiative, www.usafreedomcorps.gov, received more than 6 million visits in the month it has been operating. Applications to the Peace Corps grew 56 percent from a year earlier, to 14,614, while applications to AmeriCorps grew nearly 50 percent. Traffic on the Web site for Senior Corps, a service program for older Americans, has grown by more than seven times, to 131,000 hits a week. The new Citizen Corps, volunteers to guard against terrorism, has signed up 18,719 people. A Peace Corps assessment team is visiting Afghanistan and Pakistan and in two weeks will recommend how to build a presence in those countries.

As a government program and legislative initiative, Bush's service program is relatively modest. He favors spending $560 million next year to expand service programs, far less than some in Congress had proposed. But Bush has also created a White House office to find ways to boost service, and his aides hope to gradually increase service opportunities and incentives to the point that it is a common option for those leaving high school and college or retiring.

This story has been posted in the following forums: : Headlines; National Service; Expansion; President Bush