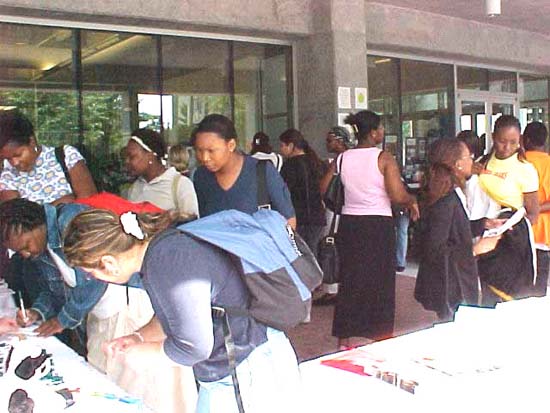 During his State of the Union address a week ago, President Bush called for doubling the number of Peace Corps volunteers over the next five years.

The president's endorsement couldn't have come at a more appropriate time, nationally and locally, for the 41-year-old international service agency.

"They know the Peace Corps," recruiter Erin J. McHenry said while staffing an information table at Goshen College on Jan. 30. "They know it's been around for 40 years, and they're inspired by it."

Recent events have raised young people's interest in it, too.

"Since September 11, people want to promote peace," McHenry says. "They don't want to give money; they want to pitch in and do something. Of course, there's the economy. We're hiring and few other companies are."

The Peace Corps commitment lasts 27 months, three months for training and 24 months for in-country service. The 12-week training period, which usually occurs in the country of service, concentrates on technical, linguistic and cross-cultural training. It organizes its jobs in six basic categories: education, business, environment, agriculture, health and community development.

Recruiters Sophia Kamp and Sylvia Jumawan held an information meeting for 15 students -- two left midway through the presentation - - and two older adults Thursday at the University of Notre Dame.

All three recruiters have served as Peace Corps volunteers themselves -- Kamp in Niger, Jumawan in Paraguay and McHenry in Kenya.

Kamp blamed the low turnout on the ice storm that hit the area last week.

"Notre Dame is in our top 25 of schools," she says. "I would say that the school is committed to service. All of the applicants I have interviewed from here have experience in service, and they have great skills."

Tony Lusvardi, a Notre Dame senior from Minneapolis, Minn., has already completed most of the application process, including the interview. If accepted, he'd like to teach English in a republic of the former Soviet Union.

"I do want to do something that's service-based, and I guess my idea was to do this before I'm employed and have those commitments," he says. "Obviously, one person can't change everything, but at the same time, I think I'd feel bad if I didn't try to help other people."

Lillian Kidane, a Notre Dame senior with a major in sociology and Arabic studies with a concentration in Notre Dame's science, technology and values program, was born in Washington, D.C., spent her childhood in Ethiopia and attended high school in Fresno, Calif.

"I come from a Third World country, and I spend a lot of time traveling," she says of her interest in the Peace Corps. "I'm in college and have the savior syndrome: I think I can save the world. My dad says, 'If you're going to present a problem, present a solution.' "

Kidane submitted her application a month ago and is now waiting for an interview.

"After September 11, the only thing that changed is that I became adamant that I wanted to go to the Middle East," she says. "That's closer to my culture -- North or East Africa. I speak Arabic, so I think I could be of more help to them there."

The Peace Corps was making its first recruiting stop at Goshen College. The school has sent 34 alumni into the Peace Corps since 1961 and has one enrolled now.

In her first two hours at the Student Union building, McHenry took the names of 11 people interested in receiving more information and gave information booklets to 40 people.

"They have specific questions, and that usually means they're interested," McHenry said after talking with a group of three students. "I want to say it's because 80 percent of the students do this overseas service, and once you do it, it's kind of addictive. You want to do it again."

Jonathan Horst, a Goshen College senior from Lancaster, Penn., says he is "generally interested in peace work around the world" and returned recently from six months spent in Colombia working on human rights for a Christian organization.

Horst said the possibility of having his student loans deferred was also an attractive aspect of service in the Peace Corps, as was the opportunity to travel.

Tim Voliva, who graduated from Goshen College in December, grew up in Germany as a member of a military family and would like to go overseas again.

He says he likes the idea of what the Peace Corps represents.

"I think it gives young Americans the opportunity to go abroad and spread the message of peace," he said. "We're at a pivotal juncture in world history, and we need to balance military efforts with peace efforts. It also is an opportunity to grow. It's going to give you challenges you can't get here."