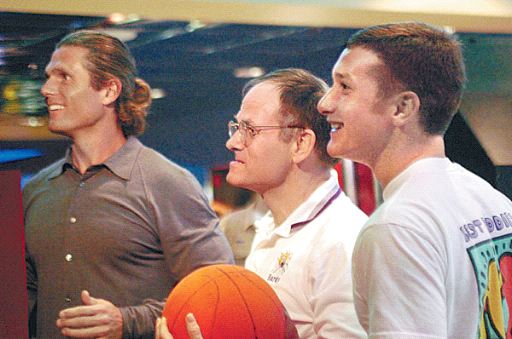 Shriver balanced a ball on his fingertips before tossing the ball into a net in the game room at Circle Bowl.

Shriver is the 38-year-old son of Eunice Shriver, founder of Special Olympics, and Sargent Shriver, organizer and first director of the Peace Corps.

In 1987, as a student at Georgetown University, Anthony Shriver started Best Buddies. The idea was to pair college students with mentally retarded people for social outings.

"The big thing is for people who are intellectually disabled to have a presence in the community," Shriver said. "They put things in perspective with their patience, sensitivity and joy of life."

Merlin and his buddy, 42-year-old John Dean, were bowling one night with Best Buddies Louisiana. The outing coincided with Shriver's visit to Baton Rouge.

Though the organization has chapters in every state, Louisiana became only the 14th state with a Best Buddies office last summer. LSU students started a chapter in 2001. The state office is at 365 N. 4th St.
.
High school chapters in Baton Rouge include Bishop Sullivan, Redemptorist, Tara, Woodlawn, Lee and Baton Rouge Magnet high schools. There is a middle school chapter at Glasgow.

Merlin, who has a retarded cousin, heard about Best Buddies when LSU's chapter president spoke to Alpha Epsilon Delta two years ago. AED is a pre-med honors society.

"She said they needed more male Best Buddies," Merlin said. "So, I joined."

Merlin and Dean talk by telephone at 8:30 p.m. Mondays and Wednesdays.

"I try to see him every two weeks -- movies, bowling -- we watch sports on television," Merlin said.

"He's pretty independent. He has brothers and sisters in town."

Dean rides a bicycle to work at a fast-food restaurant on Sherwood Forest Boulevard.

"I like being with him," Dean said. "And going out and doing things."

"I sometimes forget John is intellectually disabled," Merlin said. "I talk to him in a normal way, and he understands. When I leave LSU, I'll have to find him another buddy. I'm not looking forward to it."

"When people are willing to step up and do something like this, it means something," Dean said. "It gives John the ability to go do things because it's one on one."

"When I was in high school, I'd visit people in nursing homes," Carlisle said. "You'd go to make their day and they'd end up making yours."

Wood is 50. The 30-year difference in their ages poses no barrier to friendship, Carlisle said.

Wood works at a hotel setting up rooms for conferences.

"To talk about sports," Wood said.

"He's an LSU fanatic," Carlisle said. "He knows more about LSU sports than I do."

LaShondra Hilliard, 22, of Destrehan, an LSU sociology student, was on her third outing with Linzi Gomez, 19, of Sunshine.

The Gomez family introduced Hilliard to rabbit and squirrel at a cookout.

"She's the one who's giving me different ideas," Hilliard said.

"They get left behind," Nixon said. "People forget they're regular people. They're like us. They like movies, shopping and bowling."

The future of intellectually disabled brothers and sisters is something their families talk about, Nixon said.

Big Buddies has chapters on 900 middle school, high school and college campuses in the United States and Canada. The organization is in 20 countries, Shriver said.

Fund-raiser
Comedian Michael Aronin will be featured at "An Evening With Friends," a fund-raiser/public awareness event for Best Buddies Louisiana, at 7 p.m. Thursday at Mickey's Varsity Shop, 340 Florida St.

Aronin, born with cerebral palsy, travels the country using his wit to entertain, instruct and motivate. He has performed at such comedy clubs at The Comedy Store in Hollywood and The Improv in Washington, D.C.

The event will also include wine tasting, hors d'oeuvres, a silent auction and a talk by David Quilleon, program director for Best Buddies International who has two siblings with intellectual disabilities.

Tickets are $15 with all proceeds going to assist the programs of Best Buddies Louisiana. For more information, call 225-383-7899. Or go to the following Web sites, www.bestbuddies.org or www.bestbuddieslouisiana.org.

This story has been posted in the following forums: : Headlines; Service; Peace Corps Directors - Shriver