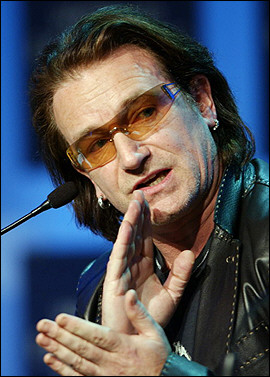 Caption: Irish rock star Bono talks during the session 'The G-8 and Africa: Rhetoric or action ?' at the World Economic Forum (news - web sites) in Davos. Bono warned the leaders of rich countries they were carrying the hopes of a generation with promises to end poverty in Africa.(AFP/Eric Feferberg)

DAVOS, Switzerland (AFP) - Rock star and anti-poverty campaigner, Bono, and computer billionaire Bill Gates (news - web sites) warned the leaders of rich countries they were carrying the hopes of a generation with promises to end poverty in Africa.

But while they welcomed recent efforts to bring more aid, trade and health care to poverty stricken sub-Saharan Africa, Bono and Gates insisted that 2005 must be a turning point for poverty there.

"Our generation wants to be remembered for something other than the war against terror."

"We actually want to perhaps be the generation that's remembered for ending extreme poverty. Extreme poverty is what I call stupid poverty," he added as the meeting of global political and business leaders entered its second day in the Swiss mountain resort of Davos.

Gates, who has contributed billions of dollars of his Microsoft fortune to help fight disease in developing countries, added: "I'm very optimistic about what will happen, but I agree it will be a turning point this year."

Blair admitted that key proposals by a group of experts on Africa, which are to be presented to the G8 later this year, should be followed up in concrete terms, although he declined to say how.

"Great advances are important, but unless there's a mechanism for them making sure that it's taken forward ... then there's a danger that they fall back again," the British leader said.

Amid reminders that one billion Africans were living on less than one dollar a year, South African President Thabo Mbeki warned that debt was crippling poor nations and had to be cancelled with "passion and rage".

"It really is quite obscene that poor countries become net capital exporters to rich countries because of that," he told the forum.

"It's not the usual bleeding heart debate going on here," Bono remarked, warning of the danger that some of Africa's poverty, disease and conflict-ridden states could turn into destabilizing hotbeds of extremism.

"I said how dangerous it is to leave Africa in this state, there are 10 or 12 potential Afghanistans there," he added.

Gates and Bono praised steps by the G8 to finance more aid, trade and health care for Africa in recent years.

But aid needed to be doubled, rich countries still had to open up their markets to trade from Africa, and much of the debt relief effort had to be completed by the end of the year, Bono warned.

Pledges by US President George W. Bush (news - web sites) in 2003 marked a "paradigm shift" in aid, but appeared to be flagging under the country's budget deficit.

"At the moment we hear that they're slipping back on their commitment: that would be five billion dollars this year, but we hear that will be lower. That would be really disappointing," Bono said, also urging the US to make a greater efforts for African trade.

Gates said the United States was the furthest of the rich countries from the UN's target of spending 0.7 percent of the budget on aid and needed to carry through "some things that started".

"This will be a very important year because the pressure to ignore these issues, when so many other things are going on -- particularly with the financial crisis -- will be quite strong," the computer guru said.

This story has been posted in the following forums: : Headlines; Poverty; Africa; HIV; AIDS; Summit