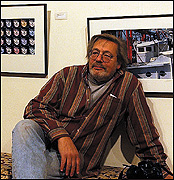 Have camera, will travel

Caption: Well-traveled photographer Rowland Scherman at the Academy of Performing Arts in Orleans, where a retrospective of his work is on display. (Staff photo by Stephanie Foster)

Rowland Scherman admits making two mistakes in his career as a photographer. After photographing a cover for Playboy, he turned down a job as a staff photographer because he didn't want to relocate to Chicago. "I love Chicago now, but I didn't like it then. It was a big mistake," he says.

The other occurred in 1962 when he was in Togo, West Africa, during a coup and the president was shot a short distance from his hotel. The only thing that separated him from the scene was a group of 30 drunken, black soldiers with machine guns. "We were told to stay indoors. I could have gone out and bulled my way by them. I was the only photographer in town. It was huge news. I could have won a Pulitzer." Instead, he stayed in the hotel and drank beer, ate lobster and went to the pool. "It was a big mistake."

Other than that, Scherman has been in the right place at the right time most of his life, as his photo exhibit at the Academy of Performing Arts in Orleans attests. The show, which runs until March 15, features portraits of the Beatles as well as a portrait of folk legend Bob Dylan. It became the Grammy-winning album cover for "Bob Dylan's Greatest Hits," and an enduring icon of the '60s.

"It was so easy. And straightforward," he says, remembering the night in 1967 when he attended a concert and decided to go backstage. "Dylan was on his way to becoming huge. I pushed my way in backstage. People said, 'Hey, you can't come back here,' but I said I was from Life magazine. I had more photos in Life magazine then than any other photographer at the time. I wasn't going to be denied."

Suddenly he saw Bob Dylan playing the mouth harp with a blue light behind him creating a silhouette of his hair. Scherman took six shots. "I felt in my heart that I was never going to get a better picture," he remembers. Later he submitted them to Columbia Records. It was chosen for a cover immediately.

He was named Photographer of the Year by the Washington Art Directors Club and in 1991, he published a book of photos called "Elvis Is Everywhere" with pictures of all things Elvis. In 1992, he created a series of color photographs of walls in St. Miguel called appropriately enough, "The Walls of St. Miguel." Each is like an abstract painting. Grouped together, it is similar in concept to "The Doorways of Ireland" poster. He also created an alphabet by photographing nude ballet stars and called it "Love Letters." "It didn't have a wide enough audience," he admits.

Scherman was born in New York and raised in Westchester. While at Oberlin College in Ohio, he got a job at Life magazine assisting in the darkroom. So impressed was he by the process and the people, he changed his major from English to photography.

Both college and his photography career got derailed when he signed a singing contract with a record company. "That's a whole other story. I was very cute and was going to be the next Ricky Nelson. Then the Beatles came along, and Dylan. The music changed. I played the guitar. You had to know more chords."

When President Kennedy gave his famous, "Ask not what your country can do for you" speech, it changed Scherman's life. He decided to join the Peace Corps. But when he offered his services as a photographer, he was told they didn't need him. They needed doctors, carpenters, social workers. Tenacious, he stayed in Washington, hoping the Peace Corps folks would change their minds. Then his lucky break came.

Princess Beatrice of the Netherlands arrived and wanted her picture taken with Sargent Shriver. "They asked, 'Where is that kid with the camera?'" Instead of becoming a volunteer, Scherman was given a job in government service, and a diplomatic passport. "Bill Moyers was my boss," he recalls. "He was the press secretary."

Scherman traveled around the world taking photographs of Peace Corps workers in action. "It started my career in a meaningful and beneficial way. In those days, everywhere I went, people would shout, 'Kennedy, America, we love you.'"

His work appeared in Time, Life and Look. Finally he quit government service and became a freelance photographer. "I went up in a glider to shoot for National Geographic. I photographed song birds of North Virginia. I did fashion photos for the Washington Post," he says. "I was so into photography, I didn't have room for anything else. Everything was so damn easy in those days. There were only about 19 photographers."

Then, television came along and Life magazine felt the brunt of it. So did the photojournalists. Scherman moved to Britain. "I thought the end of the world was coming. I wanted to grow vegetables and tend sheep in the Welch Mountains. I shot the heads of sheep instead of the heads of state," he jokes.

Over the seven years he was there, his photography underwent a change. "I went from photojournalism to art." But he got bored plowing fields and tending sheep. When he broke up with his girlfriend, he returned to New York. "I found it changed. Dismal and dirty. When a friend in Alabama who was in advertising called and said, "We need you," he went.

He spent 20 years doing advertising, corporate and portrait photography. And opened a pub. "They didn't know what a pub was. I had good pub food and Benny Goodman on the stereo. I thought I was Humphrey Bogart in 'Casablanca.' I had a black piano player. It was cool, a huge success." But 16-hour days and partying every night strained his marriage. "I sold it for a huge profit and split it with my wife. She took off."

Five years ago he came to the Cape to visit old friends and, intrigued by the beauty, stayed. When rules got strict about disposing of darkroom chemicals, he got himself a computer, scanner and printer and went digital.

Compared to his live alphabet days, Scherman's photography is tame today. He specializes in children's portraits. "Kids like me because I am a kid," he quips. And he experiments with multiple images a la Andy Warhol and abstractions that look like digital pointillism. He has a keen eye for detail and balance. A photo of water, light and seaweed is a total composition as is the grainy abstraction of the Nauset Beach parking lot. "I'm an artist talking through the medium," he says.

He wants to redo what he calls the Cape Cod cliché - pretty photographs of lighthouses and little red rowboats. They are not his style. But he admits, "It's damned hard to come up with Cape Cod originals."

What: A retrospective of Rowland Scherman's photography

This story has been posted in the following forums: : Headlines; COS - Togo; Photography; Journalism; History; 1960's