In 1977, Craig Downer volunteered for the Smithsonian Peace Corps program in Bogota, Colombia. It was there that he had his first encounter with the endangered Andean mountain tapir. 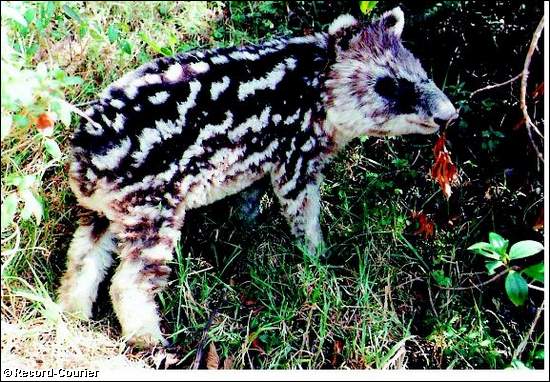 In 1977, Craig Downer volunteered for the Smithsonian Peace Corps program in Bogota, Colombia. It was there that he had his first encounter with the endangered Andean mountain tapir.

Nevada has a native son who is working to save an animal native to another country. Craig Downer, a fourth generation Nevadan, was born in Reno in 1948. He spent most of his adolescent years on the old Henningsen Ranch on Waterloo Lane near Minden, wandering the area for many hours riding his horse Poco. He would often spend days on horseback exploring the Sierras and enjoying their natural beauty.

His father, Robert Downer, a newcomer to Nevada and Carson Valley in the 1940s, was a civil engineer and his mother Alice, who turns 92 on March 2, was a decendent of the Cornish people who came to Nevada with their knowledge of underground mining. His mother spent her life's career in education and her skill as an educator comes through in her son's accomplishments today.

Craig Downer should have been a Douglas High School graduate with the class of 1966, but he decided to graduate early as a member of the Honor Society and the unique distinction of being a class of one graduate, on Aug. 12, 1965. He spent his first adult years working with his father in his civil engineering business but soon realized conservation was his calling in life.

But, it was after he received his master's from University of Nevada, Reno that his life took the course it follows today. In 1977, Downer volunteered for the Smithsonian Peace Corps program in Bogota, Colombia. It was there that he had his first encounter with the endangered Andean mountain tapir.

"Emerging from a steep, mossy Colombian cloud forest into the mellow light of late afternoon. I was startled by two woolly, burro-sized coal-black apparitions less than 50 feet away, he said. "The mysterious creatures gazed intently at me. We stood alert, stock-still, fascinated in each other's presence, until an ear-splitting scream from one of the pair broke the spell and in perfect unison. The two animals bolted off."

This is where Downer's enchantment with the endangered tapir germinated the seed of his determination to do all he could to save them and their life-sustaining "cloud forest" environment that today is equally threatened by extinction.

The tapir, an elusive creature, is a member of the horse family because the three toes on his feet are actually hooves. Not much bigger than a full-grown hog, these herbivores were once called "living fossils," remnants of the age just after the dinosaurs, some 50 million years ago. Today, less than 2,000 of these animals exist, due to encroaching civilization, the destruction of their habitat and the cruel death at the hands of poachers who still harvest them for their delicious meat, hides and their "folklore medicinal powers."

Downer said if awareness is not raised as to their plight and that of their environment, it is predicted a greater than 50 percent chance that the species will go extinct within the next five years.

Downer struggled to suppress anger in his voice when he talked about the destruction to the magnificent "cloud forests" due to the mining operations with total disregard for the ecological ramifications. Fluent in Spanish and other languages, he has worked with diligence to educate the local mountain people in the Sangay National Park, where the most significant part of his tapir studies takes place.

"The interests of humans, animals and the environment are parallel," he said, "and there must be a reverence for all life."

Those words are the syllabus he uses in his attempt to educate, but it falls on the deaf ears of progress when businesses and the salvation of an eco-system collide in head-to-head combat.

Downer knows that time is running out and something needs to be done Ð and done soon. He is working on a project to place radiocollars on the tapirs for tracking and studying purposes. The project, although providing valuable information, has not been without sorrow and disappointment.

So far, of the seven he has collared with the help of the Puruhaes Indians, four have been killed by poachers.

Because Downer always has to depend on donations to carry on his work, he has established the Andean Tapir Fund, a non-profit organization, at his home in Minden. He also receives some financial support from Wildlife Conservation International in New York.

Downer spends as much time as he can in the Andes, working on his research, but when he comes home to Nevada his time is spent giving educational lectures along with a slide presentation from the photos he has taken.

He is also an advocate and ardent defender of the wild horses in Nevada. Having met and worked with "Wild Horse Annie," Downer cares about the protection of one of Nevada's last wild treasures.

Anyone interested in learning about ecological responsibility can contact Craig Downer at P.O. Box 456, Minden, NV 89423 or his e-mail: ccdowner@yahoo.com or his Web site: andeantapirfund.com.

This story has been posted in the following forums: : Headlines; COS - Colombia; Wildlife; Tapirs

Thanks for publishing this article covering a lot of my life. The article also stressed the publication of my new illustrated book of poetry Streams of the Soul Here is the link: www.amazon.com/Streams-of-the-Soul-ebook/dp/B004V5 3CR0