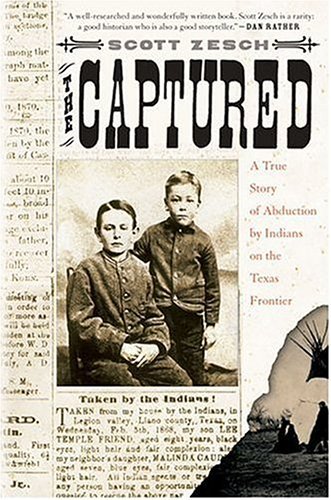 An Interview With Scott Zesch

Scott Zesch in the cave where his "white Indian" ancestor lived as a hermit in the 1890s.

Scott Zesch’s great-great-great-uncle Adolph Korn was the 10 year old son of German immigrant farmers in the Texas Hill Country. On New Year’s Day 1870, he was kidnapped by the Apaches and for nearly three years fought with the Plains Indians against white settlers, soldiers and buffalo hunters. He was not the only one. The children of other white settlers in the area were captured by the Apaches and Comanches and lived life as full fledged members of the tribe.

Scott Zesch has written a fascinating book, The Captured: A True Story of Abduction by Indians on the Texas Frontier, that tells the story of these child captives. Scott is a graduate of Texas A&M University and Harvard Law School. The following is an interview he recently gave to the California Literary Review.


When did you first hear stories of your great-great-great-uncle’s capture by the Apaches?

Sitting at my grandparents’ table for Sunday lunch, when I was about ten.

How did you feel about it at the time?

Indifferent, I’m sorry to say. I’d grown up in a region where raids and kidnappings by Indians had once been commonplace, so I didn’t think it was anything unusual. I was an adult before I realized how extraordinary his experience must have been.

Why do you think Native American tribes kidnapped white children?

One reason was commercial. These kids could be sold for ransom or traded to another Native American tribe. But I think the more important reason, especially after 1850, was adoption. By that time, the Plains Indians had lost a huge number of their own people to smallpox, cholera and warfare. They thought that if they captured young boys before their cultural identities were completely set, they could retrain them as Indian warriors and get them to fight willingly for the tribe. And that’s exactly what happened.

By the way, not all the captives were white. In fact, the majority were Mexican or Mexican-American. The Plains Indians also captured a number of Euro-American and a few African-American kids, as well as Native Americans from other tribes. In my book, I focused on the white children because their experiences were better documented. Also, I wanted to study kids whose circumstances were similar to my own relative’s.

Wouldn’t the kidnappings just cause the Native Americans more problems with the white settlers?

I don’t think they worried about that. Right up until the reservation period, the Plains Indians still believed they could whip the invaders. Most of them had never seen population centers such as San Antonio or Galveston, so they had no idea how badly outnumbered they were.

Was captivity unique to the Plains Indians or did kidnappings also occur in other parts of the country?

It seems to have been universal throughout North America. In the seventeenth and eighteenth centuries, abductions by Indians were common along the eastern seaboard, especially in colonial Massachusetts and Virginia. A large number of those children also came to prefer the natives’ way of life.

What do you think it is about these stories that fascinate us?

Indian captivity has always been one of those “sexy” topics in popular culture. In earlier times, I think people were drawn to the contrast between primitive and advanced civilizations. They debated who was really the “savage.” Today I think we’re more interested in the psychology. How could these captives shed their old ways of thinking in a year or less and adopt an entirely new value system? And, of course, the ways in which different cultures in this country relate to each other is as timely a topic as ever. There’s one other part of the captives’ experience that’s especially relevant after the attacks of 9/11/01. These children didn’t transfer their hatred of the horrible acts of certain individuals from another culture to the other people as a whole.

No matter how brutal and violent their capture, no matter how harsh the conditions they lived under, the captives all seem to have a very strong affinity for Native American culture. Some simply could not readjust to white civilization. What do you think are the reasons for this?

There were a number of reasons. They came to enjoy the freedom of Plains Indian life, the mobility, the leisure of the camps. Life for children on the Texas frontier was very hard. Most of the kids couldn’t go to school and spent every day working long hours. The captives were in a unique position to compare native communities with their own. I was a Peace Corps volunteer in Kenya, so I can understand why they clung to the things they admired in the other culture long after they came home. I also think it’s very significant that their Native American families invested a lot of time teaching and training them—something their natural parents hadn’t been able to do. As a child, I remember feeling proud when an adult treated me as an equal and entrusted me with responsibility. I think these child captives felt the same way. They wanted to please their adoptive parents, because the Indians gave these kids opportunities they’d never had before.

That’s interesting. Do you think there are other lessons we can learn from these stories, either as parents or as a society?

The captives overcame their stereotypes of people who were different by actually living among them. After a while, they no longer saw them as generic “Indians” but as individuals—both good people and bad. It’s not practical for everyone to spend time in a foreign culture, but I think these stories remind us to take advantage of every opportunity we get to go beyond our usual boundaries.

The Native Americans seemed to test the captives for their level of fear and toughness. Was there a certain type of child who thrived with their Indian captors?

It’s hard to generalize, but I came to believe that the children who adapted best were those who liked adventure, were risk-takers, were somewhat assertive, and were open to new ways of thinking.

Did you come across stories of a child who may have been more sensitive and unable physically or psychologically to survive their capture?

One of the captives I studied, Clinton Smith, didn’t seem to enjoy raids and battles. But he was a smart kid, and he learned to negotiate with the Comanches, doing favors for the warriors so they wouldn’t make him go on their raiding trips.

Are you working on another book?

I’ve had three different book ideas bouncing around in my head for some time, and I’m trying to settle on one of them. I hope to be working soon.

Thank you for sharing your insights with the California Literary Review.

This story has been posted in the following forums: : Headlines; COS - Kenya; Writing - Kenya; History; Native American Issues