RPCV Lee Wilson, organized an event for his school for Peace Corps day and convinced 11 other volunteers to share their experiences 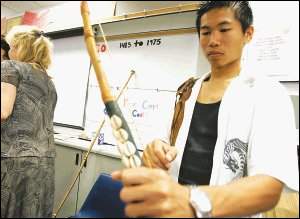 RPCV Lee Wilson, organized an event for his school for Peace Corps day and convinced 11 other volunteers to share their experiences

Caption: Cathedral City High School sophomore Hath Ma, 15, holds a bow originally from Nigeria brought to the United States of America by Joanna Stark (left) during her volunteer work with the Peace Corps in Nigeria from 1966 to 1968. Photo: Omar Ornelas, The Desert Su

Jennifer Larson
The Desert Sun
March 5, 2005
The African countries of Kenya and Ghana are a long, long way from Cathedral City High School.

Such a long way, in fact, that sophomores Brandi Smith, 15, and Tana Yurivilca, 15, and freshman Alvaro Orellana, 14, didn't really know much at all about them.

"It's different from here," Yurivilca said.

But thanks to their school's commemoration of Peace Corps Day 2005 on Friday, they got an introductory course on exotic countries from 'round the world from Peace Corps volunteers who actually lived there.

Teacher Lee Wilson, himself a former Peace Corps volunteer, organized the event and convinced 11 other volunteers, many from the Coachella Valley, to share their experiences.

The students learned that volunteer Jill Nation lived in a rainy part of Kenya for two years while she taught school. She lived in a mud hut that had a tin roof so the rain could run off into collection barrels to be used for washing and drinking.

"For them to come and talk to us and bring shoes and things was very interesting," she said, referring to a pair of decorated slippers that were custom-made for Stark when she lived in Nigeria. "You got to see real things."

In fact, now Medero thinks she might like to live in another country and learn how the people live firsthand.

"You can also have respect for them and learn how they are," she added.

Teacher Kim Robinson hopes that many of the Cathedral City High students learned a similar lesson from the Peace Corps volunteers.

"So many of them have never travelled," Robinson said of her students. "This is such a great opportunity for them to understand what goes on in the rest of the world and how good we have it here."

Although he has been to Mexico, Green hasn't visited any other countries yet, and neither have most of his classmates. Peace Corps Day was a good chance to show them a variety of other countries that they might not even know about.

"There's other continents besides North America," he said. "There's not just Canada and Mexico."

"If they could just say, 'One day, maybe I could travel somewhere else so I could learn more about their culture,'" said Lally, who already has visited a lengthy list of countries. "If it sparks their curiosity, then that's enough."

Orellana's interest was definitely piqued, both in Africa and in the Peace Corps.

"If they would come up to me and say, 'Do you want to go to the Peace Corps?' I'd say, 'Yeah,'" he said, adding that he'd love to travel and meet new people.

"And help people," said Smith, who also was intrigued by Nation's stories, although a little concerned to learn that some tribes marry girls off at age 14 or 15. "I want to go there, actually."

And the stories were enthralling.

Megan Fri, who spent two years in Kiribati in the southeast Pacific Ocean, described her experience shark-fishing in a wobbly outrigger canoe.

"We ended up feeding the village for two months off that one shark," she told a group of students, who immediately wondered out loud how that was possible without refrigeration.

Evelyn Chander gave a demonstration of how to step into a scarf-like garment that Thai people wear when washing. For several weeks, she too, washed up twice a day, outside, like her hosts.

"I was very self-conscious every time I did it," she admitted.

The Peace Corps volunteers did field a few questions from students for whom the idea of two years in a foreign country halfway around the globe was a little intimidating.

"What happens if you're there and you want to go home?" a student asked.

"Then you go home," Fri said. "It's volunteer. The Peace Corps really wants you to stay there for two years because they invested a lot of time and money in you ... but it's not like the military. You don't have to stay."

But several of them pointed out that they wanted to stay.

"The hardest part about the whole trip, the whole tour, was having to come home," said Elsie Danielsson, who spent two years in Kyrgyzstan in the late 1990s. "I'm even considering going back, and I'm 71 years old."

Wilson said he's not sure if any Cathedral City High students have pursued the Peace Corps after college. But he hopes so.

"There's absolutely somebody here that will do this one day," he said.

The following volunteers spoke to the world history classes at Cathedral City High School on Friday: