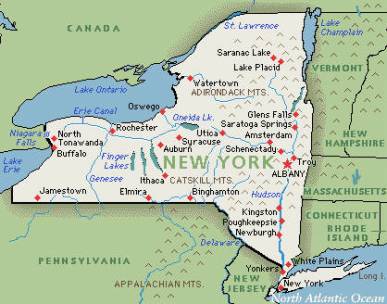 BALLSTON SPA - On a hill above Route 67, where hand-drawn signs advertise organic vegetables and firewood, Kim and Chris Andersen are building a life close to the earth.

The couple, who have two young children, settled in the village almost accidentally after moving back to the United States after four years working as teachers in Paraguay.

When they first drove through Ballston Spa four years ago, empty storefronts were common along the main street. As the Andersens have established themselves, they have also joined the effort to revitalize the village.

Community involvement, importing artwork and clothing from Paraguay and establishing a self-sustaining home is part of the Andersens' parenting philosophy. The couple are also bilingual and Kim Andersen opened a Spanish-language school, Las Mariposas, in 2003 on Milton Avenue.

"We look at the second language, other cultures, representing others through sharing their art, and sustainability not just for us and our own well-being and that of our kids, but what it means in a global sense, referring to the `think globally, act locally' expression," Kim Andersen said.

They rely on solar power for much of their energy needs, compost their food waste, eat vegetables year-round grown on seven acres behind the house, drink fair-traded coffee and wear fair-traded clothes as much as possible. The prospect of a Wal-Mart supercenter a couple miles away - a subject that has galvanized many local people into speaking out either for or against the store - jars with the Andersens' lifestyle. At a public hearing last month held to discuss a building moratorium in Ballston, all four members of the family wore red T-shirts with the words "Smart Growth" written on them with black electrical tape. The Andersens' cars bear bumper stickers that read, "Wal-Mart: Low Wages, Low Morals. Always."

"We've boycotted Wal-Mart a long time because of their anti-union attitude and not good treatment of women," Kim Andersen said.

Kim Andersen, 34, grew up in suburban Connecticut and went to college in Washington D.C. She was working as a bilingual teacher in San Francisco when she met Chris, now 39, a native of northern Michigan fresh from Botswana, where he served in the Peace Corps.

The couple moved to Paraguay in 1997 to take jobs as teachers in an American school in the capital city, Asuncion. They married in 1998. Their children, Delaney, 6, and Caleb, 4, were born in Paraguay.

The Andersens' home is decorated with art work collected on their journeys - a hunting kit from Botswana in one room, a ceramic Paraguayan wind chime in the living room. Another room is full of clothes Kim Andersen imports from local artists in the South American country, including brightly colored skirts girls and women would wear at ceremonial dances in Paraguay paired with white cotton blouses. Her business, Mango Tree Imports, is featured at Strolling Village Artisans, an artists' cooperative on Front Street.

In June, Chris Andersen installed 24 solar panels on the south side of the roof, 160 watts each. The panels provide two-thirds of the family's energy, Chris Andersen said. The panels and two "Sunny Boy" inverters were purchased from Global Resource Options, a Vermont company, with help from the New York State Energy Research and Development Authority. The Andersens took out a $16,000 loan at a 5.5 percent interest rate and NYSERDA bought 4 percent of the rate.

The Andersen home remains connected to the power grid and an exciting moment on a sunny day is when the meter starts turning backward. It means the family is selling power back to Niagara Mohawk.

"The kids ask for 'no electricity nights,'" Kim Andersen said, when the family eats and plays by candlelight.

Part of the Andersens' ambition to become self-sustaining on the seven acres they own is for the challenge of it - to see how close they can get to relying on food and energy they produce.

"We just want to see if we can do it," Chris Andersen said.

Find Las Mariposas Spanish School and the Andersens' importing company on the Web at http://www.lasmariposas.mangotreeimports.com or by calling Kim Andersen, 791-8550.

This story has been posted in the following forums: : Headlines; COS - Botswana; Solar Energy