George F. Kennan, a diplomat and Pulitzer Prize-winning historian who formulated the basic foreign policy followed by the United States in the Cold War, died at his home in Princeton, N.J. at 101. 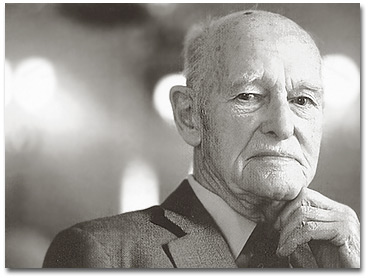 George F. Kennan, a diplomat and Pulitzer Prize-winning historian who formulated the basic foreign policy followed by the United States in the Cold War, died at his home in Princeton, N.J. at 101.

George F. Kennan, a diplomat and Pulitzer Prize-winning historian who formulated the basic foreign policy followed by the United States in the Cold War, died last night at his home in Princeton, N.J. He was 101.

A Foreign Service officer from 1926 to 1953, Mr. Kennan also was a student of Russian history, a keen and intuitive observer of people and events and a gifted writer. In his years in the State Department, he was recognized as the government's leading authority on the Soviet Union, and his views resonated in the corridors of authority with rare power and clarity.

His great moment as a policymaker came in 1946. While serving in the U.S. Embassy in Moscow, he wrote a cable outlining positions that guided Washington's dealings with the Kremlin until the collapse of the Soviet Union nearly a half-century later.

Known as the Long Telegram, it said that Soviet expansion must be halted and spelled out how that could be done. Moscow is "impervious to the logic of reason," Mr. Kennan said, but "it is highly sensitive to the logic of force." He did not state, however, that war was inevitable. The policy should have a military element, Mr. Kennan maintained, but it should consist primarily of economic and political pressure.

"My reputation was made," he rejoiced in his memoirs. "My voice now carried."

In 1947, he restated the principles in an article in Foreign Affairs that was signed "X" -- the identity of the author soon was disclosed -- and gave the policy the name by which it has been known ever since: containment.

By confronting "the Russians with unalterable counterforce at every point where they show signs of encroaching upon the interest of a peaceful and stable world," he wrote, the United States would "promote tendencies which must eventually find their outlet in either the break-up or the gradual mellowing of Soviet power."

The Long Telegram and "X" article provided the rationale for Cold War initiatives ranging from the founding of the North Atlantic Treaty Organization in 1949 to the decision to commit U.S. forces to the war in Southeast Asia in 1965. Containment had numerous permutations over time but never lost its vitality. It guided U.S. policy in Iran, the Philippines and the Far East. In the 1980s, it was transformed by the Reagan administration into an effort to roll back Soviet power through an arms buildup.

Former secretary of state Henry A. Kissinger said Mr. Kennan came "as close to authoring the diplomatic doctrine of his era as any diplomat in our history."

In 1989, President George H.W. Bush awarded him the Medal of Freedom, the nation's highest civilian honor.

Despite his influence, Mr. Kennan was never really comfortable in government or with the give-and-take by which policy is made. He always regarded himself as an outsider. It grated on him when his advice was not heeded, more so because it often turned out that he had been more right than wrong. He had little patience with critics.

His confidence in his own intellect was such that he sometimes declined to explain himself to politicians. For example, he refused to lobby for the Marshall Plan, the aid program that revived the economy of Western Europe after World War II. He was a diplomat, he said, not a salesman.

W. Averell Harriman, the U.S. ambassador in Moscow when Mr. Kennan was minister-counselor of the U.S. Embassy, remarked that Mr. Kennan was "a man who understood Russia but not the United States."

Believing as he did in a limitless human capacity for error, Mr. Kennan was an unabashed elitist who distrusted democratic processes. Walter Isaacson and Evan Thomas reported in their book "The Wise Men" that he suggested in an unpublished work that women, blacks and immigrants be disenfranchised. He deplored the automobile, computers, commercialism, environmental degradation and other manifestations of modern life. He loathed popular American culture. In his memoirs, he described himself as a "guest of one's time and not a member of its household."

A touchstone of his worldview was the conviction that the United States cannot reshape other countries in its own image and that, with a few exceptions, its efforts to police the world are neither in its interests nor within the scope of its resources.

"This whole tendency to see ourselves as the center of political enlightenment and as teachers to a great part of the rest of the world strikes me as unthought-through, vainglorious and undesirable," he said in an interview with the New York Review of Books in 1999.

"I would like to see our government gradually withdraw from its public advocacy of democracy and human rights. I submit that governments should deal with other governments as such, and should avoid unnecessary involvement, particularly personal involvement, with their leaders."

These ideas were particularly applicable, he said, to U.S. relations with China and Russia.

In the late 1940s, when he was a lecturer at the National War College and head of the State Department's policy-planning staff, he took an increasingly critical view of U.S. policy. His concern was that containment had been turned on its head, that an undue emphasis on military pressure rather than diplomacy was increasing the danger of war with the Soviet Union rather than reducing it.

He predicted that schisms would appear in the communist camp that could be exploited by the United States. Indeed, Yugoslavia declared its independence of Moscow in 1948. Mr. Kennan wrote that a similar rift would develop between the Soviet Union and China. It occurred in the 1950s.

At the same time, he warned against such involvements as the one the United States undertook in Vietnam: "To oppose efforts of indigenous communist elements within foreign countries must generally be considered a risky and profitless undertaking, apt to do more harm than good."

In the early days of the Korean War, when the invasion of South Korea had been repulsed, he urged that United Nations forces be kept out of North Korea and that negotiations begin. His advice was ignored. When the north was invaded, 300,000 communist Chinese "volunteers" entered the conflict and drove U.N. forces back below the 38th parallel, the boundary between north and south. In 1951 Mr. Kennan's contacts with the Soviet delegation at the United Nations started the process that led to a truce in 1953.

Mr. Kennan was the first analyst to say that nuclear weapons could serve as a deterrent but could never be used in war. He was so outspoken in his opposition to developing a hydrogen bomb that Secretary of State Dean Acheson said, "If that is your view, you ought to resign from the Foreign Service and go out and preach your Quaker gospel, but don't do it within the department."

In 1953, when he returned to the State Department from Princeton, he asked Secretary of State John Foster Dulles what his assignment would be. Dulles replied that he had nothing to offer. A brilliant career thus came to an end.

In academia, Mr. Kennan established himself as a leading diplomatic historian. He also contributed to the ongoing debate on how the United States should conduct itself in the world. In 1966, he made an appearance before the Senate Foreign Relations Committee in which he advised against U.S. involvement in Vietnam. In the 1980s, he emerged from a period devoted to academic pursuits to campaign for nuclear disarmament.

An issue Mr. Kennan explored in later years was environmental despoliation, which he believed might prove to be a greater threat than political and military rivalries. But the body of his work still involved the themes he had noted in his years in the State Department: Foreign policy should be "very modest and restrained," and Washington's tendency to rely on military force rather than diplomacy should be avoided.

In the same period, he issued an impassioned plea for nuclear disarmament that ended with these words:

"For the love of God, for the love of your children and of the civilization to which you belong, cease this madness. You are mortal men. You are capable of error. You have no right to hold in your hands -- there is no one wise enough and strong enough to hold in his hands -- destructive power sufficient to put an end to civilized life on a great portion of our planet."

In February 1994, in a speech to the Council on Foreign Relations at a celebration of his 90th birthday, Mr. Kennan harked back to the "X" article. The time to have negotiated with Moscow, he said, was right after the evident success of the Marshall Plan and the Berlin Airlift, "when the lesson I wanted to see us convey to Moscow had been successfully conveyed."

But the United States and its allies insisted on "unconditional surrender" by the Soviets. The result, he said, was 40 years of Cold War at a cost of vast and unnecessary military expenditure, a useless and dangerous nuclear arsenal and 40 years of communist misgovernment in Eastern Europe.

In 1989, Mr. Kennan published "Sketches From a Life," and in 1992, he published "Around the Cragged Hill." In these volumes, he expounded a deeply conservative political philosophy and a pessimistic view of mankind and of the United States in particular.

In "Sketches," he offered his idea of the typical Californian (and by implication the typical American): "Childlike in many respects: fun-loving, quick to laughter and enthusiasm, unanalytical, unintellectual, outwardly expansive, preoccupied with physical beauty and prowess, given to sudden and unthinking seizures of aggressiveness, driven constantly to protect his status in the group by an eager conformism -- yet not unhappy."

In Cragged Hill," he wrote that the United States is devoid of "intelligent and discriminating administration," and should be broken up into a dozen republics. The country should be guided by an advisory council made up of distinguished citizens.

George Frost Kennan was born in Milwaukee on Feb. 16, 1904. His parents were Kossuth Kent Kennan and his wife, Florence. He was educated at a military school in Delaware and at Princeton University, from which he graduated in 1925.

He passed the State Department examinations and was commissioned in the Foreign Service in 1926. His first post was Geneva, where he was a consular officer. In 1927, he was transferred to Hamburg, Germany, and the following year to Tallinn, Estonia.

In 1928, he went to Berlin as a language officer. The following year, he was designated a member of the first group of State Department officials to begin preparing to work in the Soviet Union. Although he detested Soviet communism, he had a deep affection for the Russian people and their culture.

From 1931 until 1933, Mr. Kennan was stationed in Latvia and Lithuania, listening posts for the Soviet Union. In 1933, he went to Moscow with Ambassador William C. Bullitt and helped establish diplomatic relations between Washington and the Kremlin, ending a break that began after the Bolshevik Revolution of 1917.

Mr. Kennan later served in Austria, Czechoslovakia and Germany, where he was detained for five months during World War II. After his release, he had assignments in Lisbon and London before returning to Moscow. He was transferred to Washington in 1946 to lecture at the National War College.

His brief tenure as ambassador in Moscow in 1952 ended when he was expelled by Stalin for comparing conditions in Moscow to those in Nazi Germany.

This story has been posted in the following forums: : Headlines; Foreign Policy; COS - Russia; History; Legacy