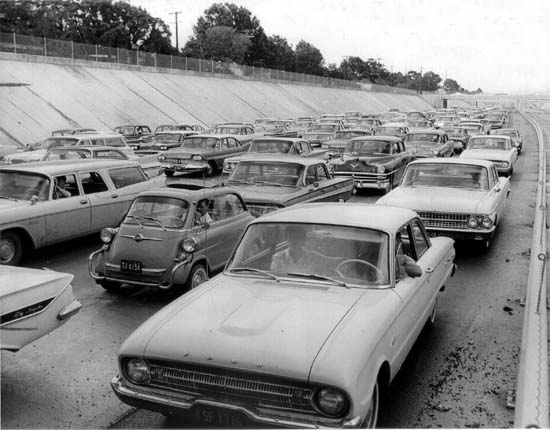 Develop driving etiquette tailored to our traffic challenges
By JACQUELYN FERGUSON,
SPECIAL TO THE NEWS-PRESS
Published by news-press.com on March 22, 2005

In a recent discussion with someone about our horrific traffic, she spoke of how some people just barrel ahead without eye contact, which seemed rude to her based on where she's from.

In response, I told her how I'd moved to Boston after not driving for 21/2 years while in the Peace Corps, not a city you want to restart driving in. After a few stressful weeks of barely surviving the local traffic, a colleague told me the secret to driving in Boston was to not let drivers know you see them. The first person with eye contact loses. I took this advice and was amazed at how well it worked — in Boston.

But this is Southwest Florida. We have drivers from everywhere, each with their driving mores from wherever they learned to drive.

I learned to drive in Minnesota in the 1960s where we followed the rule of driving in the right lane unless passing. I still practice this but for what purpose? Not enough drivers do, so it doesn't bring much order to our roads.

So here's my point. To lower traffic stress let's create our own driving etiquette. Here are some ideas people have shared with me.

• Slower traffic stay to the right. (I get first dibs here since I write the article.) Slip into the left lane for a left turn a block or so before vs. the 15 miles too many seem to need. This would decrease others zigzagging between lanes, too.

• Those who can, stay off the roads during work rush hours.

• Don't block an intersection if you might get stuck in the middle when the light turns red. Hold back until you can get entirely through. Others notice this and tend to do the same; it's a Southwest Florida thing to do.

• As traffic snakes along on McGregor Boulevard, for instance, and there's no one coming from the opposite direction let in someone from a side street, turning against traffic. It seems that this courtesy was more common 10 years ago.

• Aggressive and competitive drivers who are frantic to get the advantage, changing lanes like Imelda Marcos changes shoes, look who's around you five miles down the road; the same people you cut off to get that 10-second advantage. Is it really worth all the energy you put into it?

• Anticipate the slowdowns at Interstate 75 interchanges.

• Lobby to get emergency vehicles positioned between Alico and Daniels during rush hour, where most accidents on I-75 seem to take place. Cities that do this find it helps to clear away accidents faster.

• Use cell phone speakers or headsets when driving.

• No running red lights or tailgating for any reason.

These are just some obvious ideas that could reduce traffic stress if many would follow them.

But accept reality, too. There will always be those drivers who love the high of their own adrenaline, racing to get that 10-second advantage. There will always be lousy drivers, too. Let them go by. They'll always be there. When they die someone will take their place. Chill. Sing with your favorite music. Let those who aggravate you roll off you like water off a duck's back. Keep your eyes on post-Easter, when sanity will slowly return. Be polite; it's contagious.

— Jacquelyn Ferguson of InterAction Associates is a trainer and a corporate/success coach in Lee County. E-mail her at www.jackieferguson.com for information about her seminars and coaching or to invite her to speak to your organization.

This story has been posted in the following forums: : Headlines; COS - Colombia; Humor; Driving; Traffic