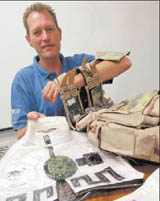 Researchers not afraid to dream big

Caption: Frederic Zenhausern, a research professor and director for the center for Applied NanoBioscience at Arizona State University, has helped develop clothing that has microelectronics incorporated into its design. Photo: Jennifer Grimes Tribune

Frederic Zenhausern doesn't know he is being mimicked as he bounds up the winding staircase at the Biodesign Institute at Arizona State University.

Just behind him, his 7-year-old son, Ryan is taking extra care to follow in his father's footsteps, placing his sneaker-clad feet on the same patches of concrete where Frederic's wingtips had stepped.

Although young Ryan won't always be just a step behind his father, he will likely follow his father's footsteps into adulthood. The boy with the big, inquisitive eyes wants to be a researcher, just like his dad.

What young Ryan doesn't know is he is the reason his father does what he does.

Zenhausern, 42, heads one of the institute's 10 research centers and is developing potentially life-changing products. He is working with the Army to create flexible computer displays, which can be folded and placed in a pocket. He and a few colleagues also are developing a cartridge that analyzes the molecules in blood for pathogens or diseases.

It's hard work being an innovator. Zenhausern typically puts in 12-hour days, which take him from his Fountain Hills home early in the morning. A dizzying spiral of meetings, research and writing proposals often keeps him in Tempe until well after dark, leaving precious few hours for his beloved family.

Why the long hours? The isolation from the ones he loves?

It started in 1999 with a broken arm, a result of Ryan playing with the dog.

X-rays showed his bones were abnormally brittle. Doctors said it might be cancer, but Zenhausern thought that diagnosis didn't quite fit.

Thus started more than a yearlong quest that ended in a diagnosis of Ollier's disease, a rare ailment that causes benign cysts and keeps bones from growing properly.

The diagnosis shocked the family, but Ryan's rare disease inspired his dad to dream bigger than he had before.

Zenhausern, who was working in private industry to develop microscopes that can "see" molecules and manipulate them, joined the ranks of academia. He then dedicated his life to learning about and treating rare diseases.

Yes, Zenhausern is a dreamer.

He sees the world in terms of problems and solutions, but no dream is too big and no solution is too far away from human comprehension.

Zenhausern is just one of hundreds of dreamers at the institute.

Arizona needs more dreamers like this, and dignitaries know it. National, state and university leaders waxed poetic at the institute's December dedication ceremony, but their words weren't just hollow praises for another pork-barrel project. They promised the institute would produce a bevy of marketable inventions that can be spun off to local companies, pumping money and jobs into our economy.

Given that the institute has already pulled in more than $500 million in start-up investments, Arizona is clearly banking its money on biotechnology discoveries. After all, this is the thing that is supposed to make us less reliant on the shaky housing and silicon-chip industries.

But ASU's Biodesign Institute is doing more than that: It's paving a road that other universities would be wise to follow.

University President Michael Crow outlined this new path several years ago in his vision for the New American University, which points in part to new curricula for students. It's about giving graduates several areas of expertise and getting them to work together, not just within academia, but also within the community and throughout the world.

This is not a unique approach.

Other universities, such as Oregon State and Purdue in Indiana, are following the same vein, putting emphasis on research, economic development and public-private partnerships.

The approach is breaking down the walls of traditional scholarship and pointing to a new horizon for research: People are working together with others in different areas of expertise, and they are forming partnerships with private companies and individuals to speed along the process of discovery.

Traditionally, Zenhausern's cartridge would take decades to complete. But he expects the device to be completed in three to five years and in doctors offices in five to seven years.

He plans to integrate everything needed to complete tests in the cartridge so it would be low-cost, aiding in its application in the market.

Of course, this breakneck speed of discovery would never be possible without collaboration, and the new biodesign buildings are proof of that. The first of four high-tech buildings on the eastern end of campus has few internal walls and lots of movable equipment stations. It feels open and airy, and it was engineered that way to foster collaboration among researchers, students and private industry.

That's pretty revolutionary for a college campus, considering that for years, some of academia's best minds spent their lives in a lab with little contact with the outside world.

But as nice as the building is, it alone won't make this grand experiment successful. Ultimately, the things that will set the institute apart from others are its people and their willingness to dream big.

Jimmy Abbas, 44, is another such dreamer who is has dedicated his life's work to spinal-cord injuries. The co-director of the institute's Center for Rehabilitation Neuroscience and Rehabilitation Engineering decided to study the nervous system after a summer job in college where he worked with kids who had severe disabilities.

He was amazed by their determination to do what most of us would consider menial tasks, but he was heartbroken to see how these kids were treated so differently from the rest of us.

Amazement and heartache were driven deeper into his soul as he taught disadvantaged kids during a Peace Corps stint in the impoverished African country of Malawi.

He returned to graduate school with a drive to help others. His residency involved working with kids with spinal-cord injuries, and he carried that theme throughout his lab assignments at various colleges.

Now he is working with Banner Good Samaritan Medical Center in hopes of giving patients better control over their damaged bodies. It has not been an easy process because the brain and nervous system are so complicated, but Abbas is working on devices aimed at improving a person's ability to move and on rehabilitation techniques that use electrical impulses to stimulate movement.

One implant he is working on promises to help patients with injured spinal cords stand. He is also studying human movement to design prosthetic limbs that can accomplish more delicate motor tasks.

Abbas sometimes gets frustrated that he can't do more on a faster timetable, but some of his innovations are already making their way to market. He reckons the major devices, however, are still three to five years away from completion.

That isn't deterring him from taking on more, however. Abbas is working with the institute's other centers, including Zenhausern's, to make devices that could have universal application. He sees potential to adapt Zenhausern's cartridge for rehabilitative purposes, to ensure exercises are working on the molecular level. That could even adapt into devices that measure a workout's effectiveness for those of us without injuries.

The funding is huge for bioengineering efforts. It comes from philanthropists, investors, entrepreneurs and even us taxpayers. But the money comes with high expectations to deliver lifesaving (and also money-making) devices in the next few years.

The Biodesign Institute is working hard with its partners and students to maximize what it can do with funding. It may seem like a risk, but those dollars are safe in the hands of people who dream big because they are so dedicated to what they do.

And because so many young people are involved in the research, it ensures that a long line of Ryan Zenhauserns will be following in their mentors' footsteps.

OK, so it won't be a literal following up the institute's concrete steps, like the young son did behind his scientist dad.

But with any luck, student-researchers will leave ASU with a head full of big dreams and a heart full of dedication to make them a reality.

Joanna Hensley is a staff editorial writer. She can be reached at joanna.hensley@arizonarepublic .com or (602) 444-7772.

This story has been posted in the following forums: : Headlines; COS - Malawi; Medicine; Drugs; Research; Biometrics; Science; Nanotechnolgy