As a Peace Corps Volunteer, Zoromski worked from 1994 to 1996 in the Fuuta Toro region of Senegal living amongst a Muslim, Fulani tribe family which spoke Pulaar 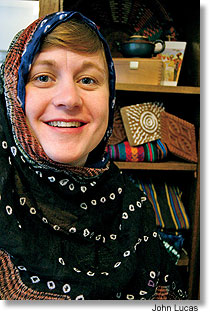 As a Peace Corps Volunteer, Zoromski worked from 1994 to 1996 in the Fuuta Toro region of Senegal living amongst a Muslim, Fulani tribe family which spoke Pulaar

Marie Zoromski says re-entering the American lifestyle was a shock after living abroad.

Marie Zoromski was delivered to the village of Mafre in Senegal West Africa during a sandstorm. "The tracks through the desert were obliterated. Our headlights were on and the villagers could see us circling, but we couldn’t see them." As a Peace Corps Volunteer, Zoromski worked from 1994 to 1996 in the Fuuta Toro region living amongst a Muslim, Fulani tribe family which spoke Pulaar.

Day time temperatures in Mafre usually hover at 120 degrees, but plunge to 70 degrees during the winter. Zoromski slept on her mat under a twig laced structure along with the chief, his four wives and their extended families. Her doorless, 10-foot square hut served only as a large closet. "We lived out of doors. I still feel a little guilty in my two bedroom apartment in Wauwatosa."

If she’s still amazed by her life in Senegal, imagine her re-entry to the United States. "I was at my parents’ house. My mother sent me to Wal-Mart, but I had to come home. I could not fathom the choices to be made." Zoromski experienced what all Returned Peace Corps Volunteers (RPCVs) face: shock at their own culture. What an unanticipated gift that is to those in this proud, select club.

Volunteers leave the United States with romantic dreams of helping developing countries, but many return quickly. Zoromski’s group of 60 was reduced to 30 after two years. She was more informed than most; during college, she visited her older sister, a volunteer in the Central African Republic. "Had I not gone to see her, it would never have dawned on me to join."

Zoromski, fluent in French, arrived with her degree, a bachelor of science in recreation management, to make things bloom in the desert. As a community agriculture extension volunteer living amongst an extended family of cattle herders, she taught composting and fertilization.

Her proudest achievement was establishing a butter co-op. "On market days, the women sold butter made from milk from their husbands’ cows in one liter containers. I got them to pool their butter so traders could efficiently buy a large quantity in one stop. Then we created a bank and this led to finding ways to use those proceeds to buy rice in quantities for the families." A photo indicating how far Zoromski was from Wisconsin, shows women churning by rocking a dried, goatskin until the milk became butter. Nowadays, Zoromski is a coordinator for the Harley Owners Group (HOG).

Cultural comparisons are daily rituals for RPCVs. Zoromski cannot sit down at a restaurant without remembering the two years she ate with her fingers from a communal bowl seated amongst the family’s women and children.

"In Senegal the body is covered. Sweeping out my hut once, I hiked up my skirt to keep the dust off. The guy living across from me told me to pull my skirt down. Coming home, I changed planes in New York and was shocked to see women’s short skirts."

Zoromski, Habi Ba in Pulaar, understands second language frustrations. "I once rode a donkey to meet some Americans. In my village no one spoke French, forget English. My Pulaar was very weak then; when I saw Americans I was like a stream of consciousness; they thought I’d gone mad."

A poignant cross-cultural experience happened doing a good deed. "A friend’s son, whom she had not seen for years, lived in the capital city Dakar. At the market town, I arranged a phone call. The conversation was short. She turned and said, ‘You people make the saddest things. He sounds like he is here, and I could touch him, but he’s so far away.’"

This story has been posted in the following forums: : Headlines; COS - Senegal; Reverse Culture Shock

I'm looking for dictionaries and other books for learning pulaar, soninke and other west-african languages. I already have informations for wollof, mandinka, serreer. Thanks for all information. Barbara