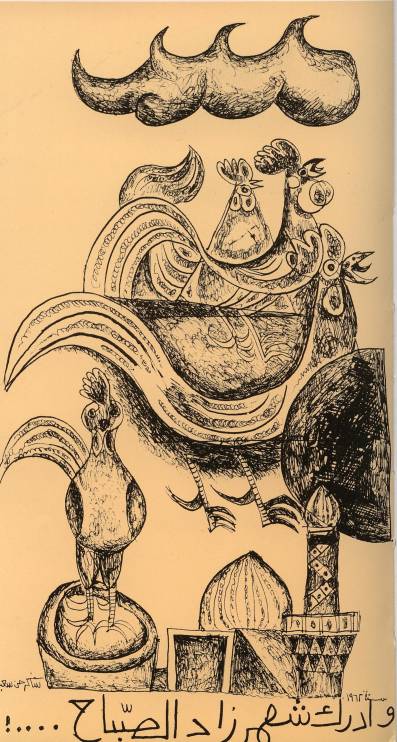 Paying tribute to an Iraqi master before his legacy disappears

Paying tribute to an Iraqi master before his legacy disappears

BEIRUT: A foreigner in Iraq once asked the groundbreaking artist Shakir Hassan al-Said to name the culture with which he identified most strongly. The question made sense at the time. This was the mid 1960s and Said - who passed away last year and is the subject of an exhibition paying homage to his legacy at Beirut's Agial Gallery in Hamra through April 2 - had just returned from four years of study in France. Like many artists of his generation, he was struggling to resist imitation, to avoid grafting impressionism onto local village landscapes or churning out Picasso knock-offs by the dozen. In an era of post-colonial independence movements and nationalist projects in Iraq as in much of the region and the world, he was fighting for a way to express his own sense of identity, heritage and modernity. And at a time when most of his colleagues were flirting with communism and socialism, he was wrestling, most unfashionably, with devotion to Islam.

With which culture did he identify most strongly? His answer was typically, deeply, and almost defiantly confounding: "The trouble is that what I am concerned with most of the time is trying to know what I am. Am I a clock or a chair?"

"What he used to say was probably never understood at the moment he said it," admits Saleh Barakat, the director of Agial who ranks Said high on his personal list of favorite artists and who considers Said's work central to the gallery's mission of promoting modern and contemporary art of the Arab world. "He left an imprint on many artists but they didn't necessarily understand him. Shakir Hassan was somebody who was in another sphere."

Born in Al-Samawah in 1925, Said earned a degree in social science from Baghdad's Higher Institute of Teachers in 1948 and a diploma in painting from the city's Institute of Fine Art in 1954. He attended the Academie Nationale des Beaux-Arts in Paris from 1955 through 1959. He later taught at his local alma mater and then headed up Iraq's Department of Aesthetic Studies at the Ministry of Culture and Information. But Said's lasting contribution to contemporary art took hold in the 1960s and culminated in 1971, when he established a group called "The One Dimension"

"There were many schools of art in the Arab world that were trying to create expression that was not borrowed," explains Barakat. "In the 1920s and 1930s, some people thought if they used a local subject that would create Arab art. After independence, artists started in the 1950s to dig into local sources of inspiration. Then this man, who wrote a lot of books and is one of the most prolific writers on art of the Arab world, came up with an idea."

Said was born into a conservative society undergoing rapid change. As he came of age, one was expected to be religious or atheist yet Said fell into the grey zone between. He believed, to be sure, but he wanted to use his intellect to make his own interpretations of Islam's religious texts, something that was, of course, both unheard of and heretical. This drew him to Sufism and the writings of legendary Iranian mystic Hallaj.

As Barakat explains: "For his generation, painting was considered something haram (forbidden). He liked painting but it was haram. He wanted to do something that was not haram." Barakat glances at the work in his gallery. "I mean, how can we know? This is what's left."

There is an interesting point of distinction between Western and Eastern (and specifically Islamic) art when it comes to abstraction. In the West, the impulse toward abstraction equaled a breakthrough into modernity. It was a highly individualized gesture, intent on smashing the existing rules of representation. In Islam, abstraction has existed since the beginning. For Muslims, only God may be worshipped and only his word may be embellished. Neither God nor his creations may be imitated. Therefore, there is a prohibition against figurative and representation painting, against the creation of objects that could be worshiped as idols. Abstraction offered a solution for artistic expression that did not violate Islam. It functioned as an expression and affirmation of faith.

Like many artists of his era, Said experimented with Arabic letters and language, considered sacred as the vehicle by which God chose to reveal himself to the Prophet. But he took the use of script much further, seizing on the elasticity of the language - its particular ability to absorb and synthesize outside influences - to deconstruct its form and meaning.

"His theorization," says Barakat, "was that art was usually about some sort of approach to God. Since God created man in his image, the whole development of Western art was like, How can I paint the human in order to paint the divine? This man wanted to find a similar idea."

Said asked himself, Where is the closest the human being comes to God in the Islamic tradition? His answer was the Miraj, the story (recorded in hadith and referenced in the Koran) of the Prophet's night journey from Mecca to Jerusalem, where he made an ascent from the Dome of the Rock through the seven heavens to God.

"For him, this ascension was the neatest way from a human being to approach God." On canvas, this idea manifested itself in a strong vertical line. His harsh mark or slash on the canvas is not liminal, it is not a threshold between states or a scar of history and experience (like Maya Lin's "Vietnam Memorial," the shape of a wound cut into the earth). Rather it is a movement, a gesture that does not contradict the uniqueness of God but rather suggests a direct one-dimensional conduit to God. And it is also, in a sense, a radical opening, a crucial breakthrough.

"I liked this idea," says Barakat, who first began studying Said's work 12 or 13 years ago and has been collecting him seriously, especially in the last year since his death. "This man, he did something that was very contemporary based on an idea that couldn't have been coming from anywhere else. You might tell me he looks like Tapies, yes [in reference to the well-known Spanish abstract expressionist Antoni Tapies.] But the theoretical framework, the conceptual underpinning, is completely different."

In 1971, Said assembled all the artists he knew who were working with Arabic calligraphy into a group called One Dimension. They mounted only one exhibition but its influence was seismic. The show cracked open a theoretic discourse.

"It was a theory," says the Kurdish-Iraqi artist Himat Mohammed Ali, who goes by his first name alone. Himat considered Said a mentor and he created a portfolio of silkscreens for Agial based on his last epistolary correspondence with him. The idea was that the use of letters could have only one dimension, not two and not three. But as Himat explains, "It was more about writing and thinking than about painting."

A decade after One Dimension's activity, Said explored another radical opening in his paintings, literally a burned-out hole in his work. As Barakat tells the story, in 1982, Said was invited by the government to tour the front line in the war between Iraq and Iran. He was obliged to visit a small village where a wedding party had been bombed, brutally killing everyone in attendance.

"When he burned a hole into the painting it was reminiscent of the war," says Barakat. "But later on it was no longer a bullet in the wall. It was a circle and this circle is infinity, an opening."

Himat adds that Said was ultimately concerned with creating a kind of nothingness in his work, a contemplative emptiness. His use of language stands not for meaning itself but as an accumulation of traces, the residue of his efforts.

After the second Gulf war, Said largely retreated from public life. Barakat has one painting in the show from 1999, and he thinks it was probably one of Said's last.

"He was a very famous person but he never acted as such," says Barakat. "He was a Sufi man and he was a real minimalist in his life. He never cared to frame his paintings. He never cared to sell his paintings. He never cared to become famous, never. Even if he was approached by a very big gallery to do a show he was not interested. He was completely in another sphere. He used to scratch a piece of paper and then throw it. If I had told him I wanted to put it in a frame he would have refused. He never had a respected art dealer. He practically never dealt with famous galleries. But when you talk to anyone about Shakir Hassan, everyone reveres him."

One of the more tragic consequences of the latest war in Iraq is that in addition to the looting of antiquities from the country's museums, vast holdings of modern and contemporary works have been destroyed. The difference is that while archaeological objects have been documented (mostly by foreigners with an interest in Mesopotamian history), no such archive was ever made for newer forms of art. An entire cultural history of theory and intellectual enquiry has, in effect, disappeared.

The works on view at Agial cover nearly 50 years of output. But still there are less than 30 paintings. "I don't pretend to make a retrospective," says Barakat. "It's a very small show compared to [what] a museum [would do] but it gives an idea for someone who's interested." The works vary in provenance. Most are from collectors in Lebanon, Syria, Iraq, and Jordan. Barakat believes there are few private collections left with substantial examples of Said's work. His writings in Arabic may be collected in books of critical essays, but the visual traces of his ideas are disappearing fast. Catch them while you can.

An homage to Shakir Hassan al-Said is on view at the Agial Art Gallery on Abdel-Aziz Street in Hamra through April 2. For more information, call +961 1 345213

This story has been posted in the following forums: : Headlines; Art; Islamic Issues; Iraq