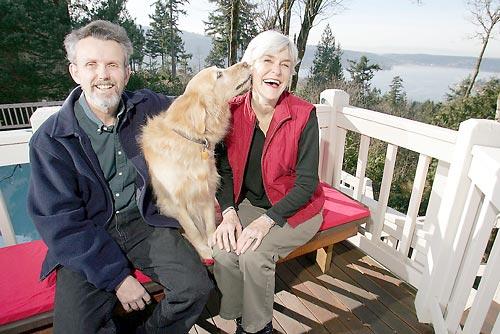 Caption: Cate and Wayne Hillard have decided to leave their comfortable Sammamish home and their dog, Kelda. DEAN RUTZ / THE SEATTLE TIMES

Thirty-six years ago and fresh out of college, Wayne Hillard joined the Peace Corps to help make the world a better place.

Now, fresh out of corporate life, Hillard will answer the call again in June — this time, with gray hair and his wife, Cate. At age 58, they are renting out their view home on the Sammamish Plateau, giving away decades of accumulated stuff and leaving the dog with a niece's family to volunteer for two years in Togo, a tiny nation in Africa.

"I was getting close to being ready to retire and we're in good health. This seems like the right time to do it," said Wayne, a former manager in medical electronics. "Helping out other people has always been a high priority for me."


Peace Corps assignments last 27 months — three months of training and two years of service. You can apply to extend for up to two years in the same country. There's no limit on total service, but you must reapply.

Volunteers receive a living allowance equal to the middle-income level of the community to which they are assigned. Housing and utilities are provided separately. Health and dental insurance are paid.

At the end of service, each volunteer gets a "readjustment allowance" of $6,075 and 18 months of reasonably priced health insurance.

Returning volunteers do not qualify for unemployment in Washington state.

Jody Olsen, a gerontologist and deputy director of the Peace Corps, will speak about opportunities for older volunteers on June 2 in Seattle. For information, call 800-424-8580, ext. 2, or go to www.peacecorps.gov.

"We felt very much wanted, useful and needed," said Cate, who works for the Emergency Feeding Program of Seattle and King County.

In this new century, as older baby boomers look for purpose and adventure in later life, the Peace Corps beckons anew.

"Have you been asking yourself what's next?" prods the headline on a recruiting brochure with white-haired, bespectacled volunteers on the cover. The brochure is part of a national Peace Corps campaign, launched in 2003, to boost racial diversity and broaden the age range of volunteers.

Older adults represent a larger share in the Northwest, where 11 percent of volunteers are age 50 and up.

Now, the Peace Corps is pushing hard to recruit even more older volunteers from this corner of the country. In part, that's because there are fewer colleges here to draw from than in other regions. But older Northwesterners also possess many of the specialized skills developing nations need in computer technology, forestry, agriculture and the environment.

"It's one thing to get a student who's majored in forestry," said Jim Aguirre, a spokesman for the Peace Corps in Seattle. "But it's another to get somebody who just retired with 30 years as a forester with a major timber company."

Last November, the Peace Corps set up its first office in Mexico with 13 mostly older volunteers, many with fancy university degrees and decades of expertise in the work world.

Four of them came from Oregon and Washington — a 38-year-old, and the rest in their late 50s — to advise small businesses and help on water-supply and sewage-treatment projects, and to teach English to engineers.

Recent international crises — such as last December's tsunami in South Asia — also have spurred queries from older adults in the Northwest looking for ways to help.

"People here are more socially conscious, a little more adventurous and not afraid to take on a new challenge," Aguirre said.

At a recent Peace Corps recruiting session in Bellevue, a handful of folks — an educator, a real-estate agent, a banker, a business manager — were well beyond their college years. They variously wanted to travel, escape job burnout and do good.

Cate Hillard knows very well she and her husband are leaving behind family and friends who will be missed. But she is convinced their Peace Corps mission is the right thing to do at this stage in life. "There's still plenty of opportunity to make a small change in the world," she says.

"I like what I do, but it's been a lot of hours, a lot of stress," the manager said.

At 56, Charleen Khane said she isn't ready to quit her job as an Edmonds Community College administrator any time soon. But she's scouting what to do with the future.

"When I was younger, I was always impressed by what [President] Kennedy did with the Peace Corps," Khane said. "I was impressed we went to the moon and that we would reach out with the best and brightest to help the world. I didn't forget that."

Kennedy established the Peace Corps in 1961 after challenging young people during his presidential campaign to serve their country in the cause of peace by living and working in developing counties.

As an experienced manager, Khane wonders if the Peace Corps has the kind of big project she'd like to tackle, such as building a dam or setting up a school. And she's concerned about trying to re-enter the U.S. job market in a few years as an older woman.

Still, Khane wants to keep making a difference. The Peace Corps could be the next best place.

The application process, which starts with a 12-page questionnaire, is the same no matter what the age. If someone has the desired background and skills, he or she interviews with a recruiter for an hour or so.

Next comes the medical screening, typically more daunting for older applicants if only because the longer you live, the longer the medical record to sift through.

"They ask you for a very detailed medical history," said recruiter Neal Hansen, 63, who served in Slovakia with his wife from 1998 to 2000. "They want to make sure everything that's happened to someone has been cured, settled or fixed."

A medical problem doesn't automatically mean you can't be in the Peace Corps. But a disability might affect where a volunteer is sent, or the assignment.

Most volunteers should expect to walk a lot, possibly squat over a pit toilet and sit in narrower spaces like the seats in old trains.

But once in the Peace Corps, older volunteers say, their age doesn't matter much.

"I was delighted that the younger volunteers, kids in their 20s, were so accepting and open to friendships with me," said Mary Liz Chaffee, a nurse from Tacoma who served in Morocco in her early 50s from 1999 to 2001.

Chaffee lived in two rooms with an outdoor toilet and no electricity the first year. Some weeks, she traveled to remote villages to give vaccinations.

The people in her community weren't accustomed to seeing older Americans as volunteers.

"Where's your mule, old lady?" they'd ask as she hiked with a pack on her back in the mountains.

Her experience was life-altering: "It allowed me to look at the importance of relationships. It's so easy at the peak of our careers — in our 40s and 50s — to just pour ourselves into work."

When Chaffee returned, she chose a job that was less demanding and more nourishing.

Older volunteers often find it tougher than younger volunteers to leave behind their children, grandchildren and a lifetime of possessions.

The Hillards had a crash course in letting go.

Last summer, Wayne Hillard was forced to retire early after 18 years in management.

The couple bounced back from the shock and retreated with a laptop computer to their small cabin in California — basically, to revise the rest of their lives. As part of embracing change, Wayne grew a beard and his wife changed her name from Catherine to Cate.

And they applied online to serve together in the Peace Corps.

They were interviewed by a recruiter within days and nominated a few weeks later.

It took a little longer to get through the medical hoops and tests. But both are in great shape from walking, biking and working out.

Last month, they received the official invitation to join. Their children are supportive, but Wayne's dad "doesn't understand why we would leave the comforts of home," Cate said.

In early June, they will receive two days of training in Philadelphia and then three months more training in Togo, with their group of 23 volunteers. Wayne will teach computer skills and Internet cafe development. Cate will help develop nonprofit programs. Most likely, they will live in a small house with water and electricity.

For now, the Hillards are packing up and studying French to prepare. A friend is taking the piano and their most comfortable chair, a daughter one of the cars. The people who've rented the house are buying the sofas. The Hillards expect to monitor their savings and retirement accounts over the Internet.

"That's part of the life change," Cate said. "You just realize you have a lot of stuff you don't need."

A great adventure lies ahead and the Hillards assume it won't be easy. Indeed, many volunteers quit early. Even the Peace Corps says: "It's the toughest job you'll ever love."

So why take it on in late middle age?

"I guess we don't feel like we're in late middle age," Wayne said.

"You don't just dry up and start watching TV in your later years," Cate said. "There's still plenty of opportunity to make a small change in the world."

This story has been posted in the following forums: : Headlines; Recruitment; Older Volunteers