Raque Kunz says: The Peace Corps had selected me to live and work on Santiago, the largest island in the Cape Verde archipelago. I had been so focused on my unsuccessful dating that I hadn’t realized my greater social accomplishment. 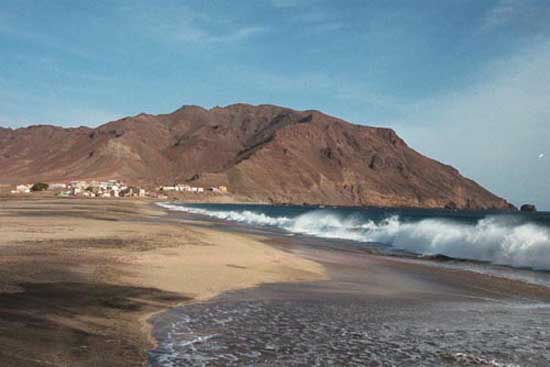 Raque Kunz says: The Peace Corps had selected me to live and work on Santiago, the largest island in the Cape Verde archipelago. I had been so focused on my unsuccessful dating that I hadn’t realized my greater social accomplishment.

A hard bargain
THROUGH THE LOOKING GLASS: Not so foreign travels
Going from the city to rural Cape Verde requires some serious choreography when it comes to dating and socializing.

Making Grogue (a type of rum) is a tradition in Cape Verde. Villages take great pride in their distilleries, which use antiquated equipment and centuries-old techniques.

She left the room.

Scuffling noises came from under the table but I refrained from investigating. I waited. I was learning that all things reveal themselves in time, if you are patient. A nose poked out from under the lace tablecloth. I stamped my foot.

Two piglets shot out from under the table heading in different directions. One barely touched the ground as it sped through the courtyard. The second one miscalculated and ran into the kitchen where my hostess was preparing food. Within 30 seconds it shot back through the room following its accomplice’s route, tailed by a five-year-old girl paddling its butt with a switch.

I took out a film canister and filled it with pebbles, turning it into a makeshift rattle. The girl watched me closely.

Ten minutes later my hostess, Nha Olivia, came back into the room.

Embarrassed that she had caught me playing, I composed myself. Adult males do not play. But instead of noticing my impropriety, Nha Olivia scolded the young girl and tried to get her to give me back the rattle. I insisted that it was a gift.

The Peace Corps had selected me to live and work on Santiago, the largest island in the Cape Verde archipelago. Even though Santiago is the home of Cape Verde’s capitol city, Praia, most of the island is struggling to develop. Villages lack infrastructure. Electricity, plumbing, and waste management are uncommon luxuries. When I moved to remote Rincon, I expected to suffer a lot. However, the lack of amenities was not the biggest hurdle in adapting to my island life. My difficulty was in learning a new approach to social situations and a new understanding of the importance of family and friends.

When it was time for supper, Nha Olivia began clucking at me and I pecked for a thread of meaning in what she’d said... something about the food.

She set the large bowl of Katxupa (a corn stew of beans and vegetables or, on special occasions, pork or tuna) on the table and looked at me expectantly.

I hated asking Capeverdeans to repeat themselves. After a year of struggling with the Kriolu language, simple conversations should have been easy. At the age of 32, I had been reduced to poorly constructed subject-verb-object sentences.

She smiled and calmly repeated the question a little louder, as though I were deaf rather than incompetent.

This time, I got it.

“Katxupa will make you strong,” she said. “Are you hungry?”

“Ayan.” I responded with bashful laughter. She spooned out a bowl full of the stew and left the room. In Cape Verde, it is polite to leave a guest to eat alone, one of many customs I never got used to.

My struggle to adapt in Cape Verde taught me to see in a new way. My ideas of what constitutes “normal” or “beautiful,” changed. I learned that the issues of which colors grate, what sounds clash, or what body functions are publicly acceptable — all depend on who and what surrounds you.

My lack of language ability in Cape Verde kept conversations focused on practical matters — fishing, farming, child-rearing. My friendships were largely restricted to men. When men get together, the conversation is about one of three topics: soccer, fishing, or mind numbing grogue (a homemade rum produced in Cape Verde).

The only times Capeverdeans deviate from this pattern of gender-segregated socializing is for dancing and sex. Having no girlfriend, I opted for the former. In Cape Verde dancing has a nearly spiritual importance. Children dance the Funana (a sexy two-step) by the age of two. Simply turning on the radio is usually enough to get two or three people out of their seats.

A good dancer automatically commands respect. In my village the best dancer was a gay man. Although gay men in Cape Verde are traditionally shunned, this man’s dancing prowess made him incredibly popular, especially with women. He was invited to every party.

My attempts at dancing, however, always sent two or three people to the floor laughing and clutching at their sides.

So I practiced. Eventually, I improved. Girls who had previously left me mid-song on the dance-floor, laughing as they walked away, were now hanging around for a second song. I started to feel like I was fitting in.


The stark landscape of Cape Verde is spiced with lush Riberas (canyons) that provide water, shade and fertile farm land.

One of the fundamental rules of cultural adaptation is honesty. If you don’t understand, acting like you do will only get you in trouble.

My first meeting with Ciza was a good example of this. I first encountered her on my way home from teaching at the high school. She and her daughter were the only other passengers in the flatbed truck. Dressed fashionably in a tight fitting top and trendy jeans, she was wrapping her long straightened hair in a scarf when I boarded the truck. She was a beautiful change from the usual fishmonger co-passengers. It was difficult not to stare. Fighting back my anxiety, I introduced myself. We tried to chat but could barely hear each other over the flapping wind.

“Abo, bu mora na Rincon?” I asked, hoping to find out if she too lived in Rincon.

“Kuza?” she looked at me with a confused expression. I repeated my question louder.

“... Ooh, Sin.” she confirmed, nodding her head up and down in case I didn’t hear. Then she asked me the same question. “E bo?“

“Ayan. N mora ku Maria Tavares,” I answered, explaining that I lived with Maria. The wind was furious.

“Kuza?” We continued on like this for the hour long ride.

I struggled to keep the conversation going. I asked what she did for a living and about her little girl but I had trouble concentrating on her answers. Every time she looked at me, her large brown eyes whipped my thoughts into dizzy spirals. Luckily, by the end of the trip she was asking me questions too; wanting to know where I was from and why I had come to live there.

When I got home I asked one of the boys I lived with if he knew who she was. He said that she lived nearby and the father of her child was living in France with a French girlfriend and might not come back.

When I mentioned that I was interested in meeting her, Maria (the mother of the family I lived with) grabbed my hand and marched me over to Ciza’s house. I felt odd storming the home of a girl I barely knew, letting an elderly lady serve as my matchmaker. It was not the kind of dating game I was accustomed to in America.

We were greeted at the door by Nozhina, an older woman living with Ciza. After a lively — and to me, incomprehensible — conversation between Nozhina and Maria, Ciza came into the room. I blushed. Luckily, Maria did most of the talking. I stood by as they chatted for about twenty minutes, and then Maria took me back home. It seemed, at first, like nothing had been accomplished on our little visit, but slowly it became clear what Maria had done.

Maria explained that I was now expected to Txiga with Ciza’s family. In Cape Verde, if you meet an acquaintances’ family, you are expected to visit them as often as possible. This visit may only be once or twice a year, if you live on opposite ends of the island, or as often as once a week, if you live close. This type of visit is called a Txiga in southern Kriolu — and can be the perfect opportunity to strike up a romance. Maria was a genius!

I worked hard to uphold my end of the responsibilities, stopping by once or twice a week to say hello.

In time, I discovered the Txiga had a few drawbacks. Normally, Nohzinha would harass me till I had eaten two bowls full of Katchupa, even if I wasn’t hungry. Additionally, as soon as I arrived Ciza would often steal away to prepare something for me to eat. While she was in the kitchen, Nozinhia would make fun of my bad Kriolu and occupy me with chatter. As a result, Ciza and I never had time to talk.

Frustrated, I asked my friend Emiliano, a local who was better schooled in such matters, what I should do.

Emiliano decided to intervene by becoming my second matchmaker. He suggested that we go to the beach on the other side of the island for an afternoon. He told me he would arrange an outing for that Sunday with Ciza and one of her friends. But, he insisted that I keep everything quiet and not tell people where we were going. I went along with his plot.

On Saturday night, I was ready for the rendezvous. But, my fast paced island romance fell out of step. Emiliano told me that the outing was canceled because Ciza didn’t want to insult her ‘mother-in-law’ by going on an outing with another man.

MOTHER IN LAW? I thought I had misunderstood. Since I had heard that she and her boyfriend were estranged, I was puzzled. I asked Emiliano where this mother-in-law was.

“Oh, I thought you knew,” he said, “Nozinhia is her mother-in-law!”

I was mortified that I had spent weeks sheepishly calling on Ciza only to spend most of my time socializing with her husband’s mother. I ended my visits.

Forgiveness took an unfamiliar form. About two weeks later I was sitting in front of the house when a shadow fell over me. I looked up to find Nozinha towering over me.

“Ingratu!“ (ungrateful) she spat out. For an instant her face was a mask of menace.

Then her grimace melted, and she grinned, showing all of the teeth she didn’t have.

“It has been two weeks since you stopped by. And I find you playing here! Come on, we are going to my house right now.”

She dragged me to her house where she fed me Katxupa and we listened to the radio. I had been so focused on my unsuccessful dating that I hadn’t realized my greater social accomplishment. I am sure that Nozinhia knew what my intentions had been but we never spoke of it. In all the confusion of trying to learn how to date Capeverdean style, I had accidentally made a close friend.

Story Source: In the Fray

This story has been posted in the following forums: : Headlines; COS - Cape Verde; Dating; Humor