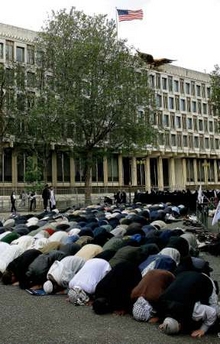 Caption: Muslims pray during a demonstration outside the U.S. Embassy in central London May 20, 2005. The demonstration on Friday followed similar protests by Muslims around the world in response to a May 9 report - which has since been retracted - by Newsweek magazine that the Muslim holy book the Koran had been desecrated by U.S. interrogators at Guantanamo.

KABUL, Afghanistan -- Muslims from the Mediterranean to the Pacific protested Friday over the reported desecration of the Koran by U.S. interrogators at Guantanamo Bay, Cuba. In Afghanistan, where anti-American riots began three days ago, at least seven people were reported killed, doubling the death toll from the violence.

The upheaval kept the Bush administration on the defensive, with Secretary of State Condoleezza Rice appealing for calm and repeating assurances that the U.S. military is carefully investigating the alleged Guantanamo incident.

While the protests have not been overwhelming, analysts fear the issue is damaging U.S. diplomatic efforts. In Afghanistan, the violence has disrupted what has been a virtual consensus in support of the U.S. presence, raising the profile of America's opponents. Protests in Pakistan forced at least two U.S. Consulates to close as a precaution.

To varying degrees, officials of the Pakistani, Indonesian and Saudi Arabian governments--all seen as essential to the U.S. "war on terrorism"--prodded Washington for action. Pakistani Foreign Minister Khurshid Kasuri called for severe punishment for any soldiers found to have desecrated the Koran, a crime that in Pakistan is punishable by death.

The uproar was ignited by a recent report in Newsweek magazine that U.S. troops had thrown a copy of the Koran into a toilet as part of their interrogation of Muslim prisoners. Afghan prisoners released from Guantanamo and other U.S. military prisons also say soldiers abused the Koran to horrify or humiliate prisoners.

In four provincial Afghan towns, violence broke out as crowds of men filled streets after the midday prayer.

At least four police were reported killed in Ghazni province and another person in the city of Gardez, both southwest of Kabul, and a protester was reported shot to death in Qala-I-Nau, in the northwest as the violence spread from southern to northern Afghanistan for the first time.

Afghan officials suggested opponents of the country's painstaking democratic rebirth were stirring up this week's trouble, while the U.S. government appealed for calm, The Associated Press reported.

Rice said that if the allegations "are proven true, we will take appropriate action. Respect for the religious freedom for all individuals is one of the founding principles of the United States."

Beyond Afghanistan, peaceful but angry Muslims protested in the Palestinian territories, Pakistan and Indonesia, according to news agency and television reports. The biggest march appeared to be in the northern Gaza Strip, where more than 1,000 Palestinians, including many activists of the Islamic militant movement, Hamas, marched to chants of "Protect our holy book."

Hundreds of Muslims protested at a mosque in Jakarta, Indonesia.

Saudi Arabia joined fellow U.S. ally Pakistan in registering dismay over the allegations, as did the 57-nation Organization of the Islamic Conference and Egypt's Muslim Brotherhood, a banned militant religious movement.

In a sermon in Islamabad, the Pakistan capital, a militant cleric and politician, Hafiz Hussain Ahmad, called for action.

"We are hurt ... If we don't rise against Americans, if we don't give them a strong message today, they will do it again," he told worshipers.

This story has been posted in the following forums: : Headlines; COS Afghanistan; Iraq; Journalism; COS - Morocco; Islamic Issues