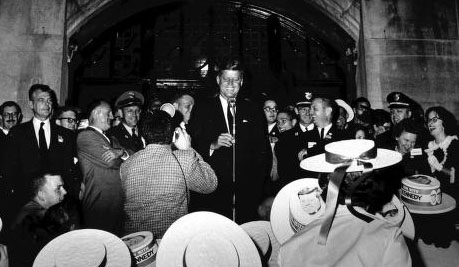 University and Peace Corps officials held a ceremony to commemorate the anniversary of then-Sen. John F. Kennedy’s proposal for the Peace Corps. A Peace Pole on the side lawn of the Union was commemorated during the ceremony.

By Joëlle Dodge, For the Daily

Caption: Well after midnight on October 14, presidential candidate John F. Kennedy arrived at the steps of the Michigan Union. In a short speech he outlined the idea of the Peace Corps, challenging students "to contribute part of your life to this country." UM hosted several of the first Peace Corps volunteer training sessions. By 1966 over 300 UM alumni had joined the Peace Corps. UM grad Jack Hood Vaughn was the Corps' second director. A plaque at the entrance of the Michigan Union commemorates Kennedy's speech.

Several generations of Peace Corps volunteers gathered yesterday at the place where the organization began 45 years ago — the steps of the Michigan Union.

University and Peace Corps officials held a ceremony to commemorate the anniversary of then-Sen. John F. Kennedy’s proposal for the Peace Corps. A Peace Pole on the side lawn of the Union was commemorated during the ceremony.

“It is certain that U of M students played a key and viable part in its formation,” Harper said.

Kennedy delivered his historic speech on the Union steps at 2 a.m. without any prepared text, Harper said.

Kennedy arrived on the morning of Oct. 14, 1960, from New York — where he had just completed his third debate with Richard Nixon — to find 10,000 University students who had stayed up waiting for him.

Bolstered by the students’ enthusiasm, he challenged them to contribute to their country by serving overseas, using their professional skills — like medicine and engineering — to help people in countries like Ghana. He emphasized the need for personal contribution and the value of sacrifice. The students responded with a roar of cheers.

By early November, 1,000 students had signed a petition, organized by the University student group Americans Committed to World Responsibility, that demanded the implementation of the Peace Corps.

Kennedy formally announced plans to form the Peace Corps Nov. 2 in San Francisco, but that day on the Union’s steps was his first public mention of the idea.

The connection with the University did not end there.

Kelly then looked to two colleagues at the University, Prof. Elton McNiell and Prof. Donald Brown, to establish the training program.

More than 2,000 people from the University have served in the Corps since its founding.

At yesterday’s ceremony, Peace Corps Deputy Director Judy Olsen spoke on the present and future of the program and unveiled a “peace pole” at the side of the Union. She recalled her own belief in the importance of the spot on the Union’s steps where Kennedy delivered his speech.

“This is the spot that changed my life forever,” she said she had once told her son, a University alum.

The Peace Corps today has more than 178,000 volunteers and serves 137 different countries.

Olsen said she has seen a rejuvenated interest in the Peace Corps since the Sept. 11, 2001 terrorist attacks. There is a new passion among young people to study abroad and to tell their stories, she said.

Kennedy challenged students to contribute a part of their lives to helping others during his address at the Union. Yesterday, Olsen concluded with a similar challenge: “We can do more and we can be more.”

This story has been posted in the following forums: : Headlines; History