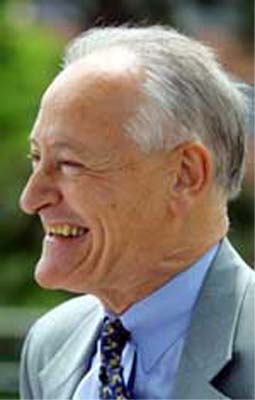 India may well take the baton from China as the world's fastest-growing big economy in the coming decade. But Americans need to understand that there are critical differences between these two giants of the developing world that have huge implications for U.S. politics and economy. Whereas China has become the world's low-cost manufacturer, the key to India's future is in exports from its service sector. And notwithstanding all the hand-wringing in the U.S. over outsourcing of low-skilled jobs in call centers and back-office accounting, the growth engine for India's economy is high-skilled/high-value-added services. Richard Celeste served as the 9th director of the Peace Corps after his appointment by President Carter. He has also served as Governor of Ohio, Ambassador to India, and President of Colorado College since 2002.

By Richard Celeste and Geoffrey Garrett

Special to The Times

Will India be the next China? While Washington continues to focus on the politics of nuclear energy and weapons, American investors are fascinated by India's beguiling economic potential.

India may well take the baton from China as the world's fastest-growing big economy in the coming decade. But Americans need to understand that there are critical differences between these two giants of the developing world that have huge implications for U.S. politics and economy.

Whereas China has become the world's low-cost manufacturer, the key to India's future is in exports from its service sector. And notwithstanding all the hand-wringing in the U.S. over outsourcing of low-skilled jobs in call centers and back-office accounting, the growth engine for India's economy is high-skilled/high-value-added services.

Indian IT firms such as Infosys and Wipro innovate as well as the best American firms, but at much lower cost. Microsoft and Intel understand. They are investing in India not to make products developed at home but rather to develop new products that will be manufactured elsewhere (in China, for example).

Skeptics are wont to claim that India's successes in software are not "scalable," and cannot be the basis for countrywide development.

But software is not a mere "industry" in the traditional sense of steel or textiles, to focus on two of China's strong suits. An uber-industry, software is increasingly in everything.

Consider the automobile, the poster child of 20th-century manufacturing. Today's cars don't have much in common with the Model T. They are designed on computer screens, manufactured by robots, and drive using a dizzying array of intelligent features — all made possible by software.

If potential global demand for software is so great, can India supply it? India's pool of English-speaking and well-trained engineers is already much larger than that in the U.S. and it is growing all the time.

Even those who understand India's human-capital potential point to the country's appalling infrastructure as its Achilles' heel — in stark contrast with China's crusade to build ever more roads, airports and power lines.

But while the parlous state of Indian infrastructure would cripple a country whose development hinges on manufacturing, it is less debilitating for one whose future is being driven by information and communication. The fact that Bangalore's airport is antiquated and that it is hard to drive to its office parks hasn't stopped Indian engineers telecommuting to the U.S. inside space-age buildings powered by privately run generators.

India doesn't even need to build telephone landlines to feed its software habit. The wireless industry, powered by software, is doing the job at warp speed. There are about 40 million Indian landline-phone subscribers; the number of cellphone subscribers is already over 60 million — and increasing at more than 3 million a month.

Software and wireless phones in India are private-sector industries, and they have piqued the interests of global capital. American venture capitalists have already made India the new frontier. If venture capital is a leading indicator, foreign direct investment into India (today about $5 billion a year) may soon catch up to China's more than $50 billion.

There is also more to the Indian economy than IT. The public-health system is in disrepair, but India's private hospitals are going gangbusters.

Apollo Hospitals is a booming company now positioned to provide sophisticated elective surgical procedures in India to patients from around the world, combining highly skilled doctors with low-cost operating theaters. According to a recent Pacific Council on International Policy-Observer Research Foundation study, open-heart surgery costing $18,000 in the U.S. can be performed for $4,500 in India.

Even Indian manufacturing shows signs of taking off. Tata Motors, for example, is currently selling about 40,000 vehicles a month. Ford, the biggest player, sells about the same number of passenger cars in India per year.

Indian demand for automobiles will mushroom in coming years, and with it comes demand for better roads. Even if the Indian government can't build them, foreign investors are lining up to do so.

The implications of Indian development for the U.S. are clear. Americans shouldn't obsess about the loss of low-skilled service-sector jobs to India. The real threat posed by India is to the heart of the American innovation economy.

To turn this into a win-win situation, the U.S. should promote the kind of people-to-people links that have made so much money for Indian-American entrepreneurs in Silicon Valley and elsewhere. Such links have also contributed to the profitability of U.S. firms like GE, Ford and Texas Instruments. The U.S. should also use these linkages as a platform for building better government-to-government relations with India.

President Bush's agreement this past July relaxing restrictions on sharing civilian nuclear technology with India is a good first step. But relations between the world's two largest democracies should be strengthened to ensure that the dynamism of the Indian economy serves the interests of both countries, rather than exacerbating tensions between them.

This story has been posted in the following forums: : Headlines; Directors - Celeste; University Administration