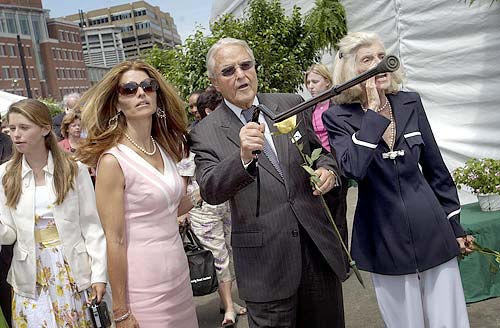 BOSTON (AP) - Former vice presidential candidate Sargent Shriver, who helped his brother-in-law John F. Kennedy create the Peace Corps in 1961, was hailed by friends and family Monday night as a man who used boundless energy and religious faith to improve the world.

Shriver, now 90 and impaired by Alzheimer's disease, did not give a speech, but he appeared physically fit and smiled broadly as he waved to well-wishers at his tribute at the John F. Kennedy Library and Museum.

He was accompanied by his wife of 52 years, Eunice Kennedy Shriver.

A panel moderated by Chris Matthews of MSNBC's Hardball regaled the audience with anecdotes about Shriver's service as the original director of the Peace Corps and his subsequent role in President Johnson's War on Poverty and his work with his wife creating the Special Olympics, which has grown to include 2 million athletes in 160 countries.

Political columnist Mark Shields said Shriver was an ardent believer in the power of ideas.

"For him ideas had no sex, gender or age. He just loved ideas. He was promiscuous about ideas," Shields said.

Shriver biographer Scott Stossel noted that some people regarded Shriver as politically naive when he launched the Peace Corps.

"Things like red tape and bureaucratic infighting, he just ignored them," Stossel said. "If this is naivetÃ©, let's have more of it."

Shriver, a Navy veteran of World War II, was the Democratic nominee for vice president in 1972, after serving as U.S. ambassador to France.

Shriver's son, Tim, said his father's views on fighting poverty were influenced by his Catholic faith.

Shields, who directed Shriver's 1972 political campaign, added, "his religion defined his political values but politics did not define his religion."