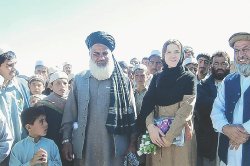 "In Afghanistan, it's really backwards as far as women's rights," she said. "Only 15 percent of women read; only 35 percent of students are women. Women aren't mobile. I knew about some of it [before joining CARE], but when you see it, it really hits home. CARE increased the number of women employees to work with Afghan women in areas where men can't. I make sure women are given opportunities for promotion, make sure our policies are fair, and make sure women have the chance to voice their opinion."

Caption: Sara Buchanan (right) works as a program development officer and gender adviser with CARE. Among her responsibilities are attending school openings, here in the Logar province of Afghanistan. Photo courtesy of Sara Buchanan.

Years ago, Sara Buchanan felt moved by the plight of Muslim women in some countries - the girl hauling water instead of going to school, the pregnant mother of four who earning a small wage mending clothes and knitting wool sweaters, the HIV-positive widow raising a 5-year-old daughter who is also HIV-positive.

After earning her bachelor's and master's degrees, she left the United States to make a difference in those women's lives.

In doing so, she gave up the Appalachian and Great Smoky Mountains for the rugged terrain of Afghanistan. She traded a moderate climate for extreme weather conditions and periodic droughts. She gave up the freedom to move about without fear for her safety to live in an area where foreign women have been snatched off the street.

Since March 2005, the 1993 Dobyns-Bennett High School graduate and her husband have lived in Kabul, the capital of Afghanistan, where she is an aid worker for CARE, one of the world's largest private international humanitarian organizations dedicated to reducing poverty.

"I feel like right now there's a lot going on in Afghanistan and there's a big opportunity to make a difference in what happens," she said.

Buchanan earned a bachelor of science degree in history and political science in 1996 from Bradley University in Illinois. She attended graduate school at the University of South Carolina, earning her master's in government and international studies in 1998.

"I wanted to go into some type of politics or policy making," she said. "I had an interest in the Middle East, particularly in Muslim women."

Buchanan joined the Peace Corps in 1999 and was sent to Kazakhstan. For two years, she was an English teacher at a high school located 100 kilometers from the Russian border. After marrying in August 2001, the couple moved to Belarus in Eastern Europe, where they stayed for several months before returning to Kazakhstan.

During that time, she was employed by USAID (U.S. Agency for International Development), an independent agency that provides economic, development and humanitarian assistance around the world in support of the foreign policy goals of the United States.

Buchanan was eventually hired as a program development officer and gender adviser with CARE.

CARE, founded in 1945 to provide relief to survivors of World War II, established its mission in Afghanistan in 1961 focusing on medical training and improving health care service delivery. The 1979 Soviet invasion and violent civil war forced CARE to suspend operations from 1980 to 1989. In 1989, the organization launched a relief and rehabilitation project in the Konar Province of Afghanistan, an area that had been badly affected by the war.

Because of insecurity caused by continued fighting between rival factions, CARE Afghanistan's main office is located in Peshawar, Pakistan, near the Afghan/Pakistani border, with sub-offices in Kabul - where Buchanan is headquartered - and five other cities in Afghanistan.

Kabul, with a population of around 1 million, was occupied by Russian troops between 1979 and 1989, and was under control of the Taliban government between 1996 and 2001.

Afghanistan's economic outlook has improved significantly since the fall of the Taliban, thanks to more than $2 billion in international assistance, but the vast majority of residents in Kabul remain impoverished, living in single-room, mud-brick houses and drawing water from wells sometimes polluted with cholera.

Safety is of utmost concern for Buchanan and CARE's other international workers. Margaret Hassan, CARE's director in Iraq, was abducted in October 2004 and reportedly killed a month later. In May 2005, an Italian aid worker for CARE was abducted in Kabul and held hostage for more than three weeks before being released.

Buchanan and her husband live in a home provided by CARE. The property is protected by a high wall, a fence with razor wire, and guards, although they're not armed. While Buchanan can't walk alone on the street - and there are more restrictions on her movements during the warm summer months - she has a CARE-provided driver to take her where she needs to go. If she and her husband travel at night, two vehicles are used, one following the other for safety.

"Some people do have problems adjusting to it ... but you do get used to it, to some degree," she said.

Buchanan, who works Sunday through Thursday (Friday is the Muslim holy day), dresses in long skirts, shirts that cover her backside, and wears a head scarf. Short sleeves are never allowed in public, even in the summer.

As a program development officer, Buchanan handles proposal and report writing and oversees the public relations, media and contacts unit. As a gender adviser, she works to make sure Afghan women's voices are heard.

"In Afghanistan, it's really backwards as far as women's rights," she said. "Only 15 percent of women read; only 35 percent of students are women. Women aren't mobile. I knew about some of it [before joining CARE], but when you see it, it really hits home. CARE increased the number of women employees to work with Afghan women in areas where men can't. I make sure women are given opportunities for promotion, make sure our policies are fair, and make sure women have the chance to voice their opinion."

While in graduate school, Buchanan didn't know there were job opportunities like she has now.

"This would have been my ideal career. I just wanted to live overseas. I didn't realize there were more programmatic things you could do," she said. "I do go out in the field ... and even though I'm not the person handing the clothes out for the winter, I know I'm helping that process along."

Although she has the option to stay in Afghanistan as long as she wants, by next spring or summer, Buchanan will probably be looking for a change of scenery.

"I'd really like to go to Africa, hopefully to a place that's not so insecure. My husband would really love to go to Africa. Or Southeast Asia, Vietnam, Thailand, would be awesome," she said.

Buchanan gets home every six months. She was able to spend part of the Thanksgiving holiday here; she and her husband divided their time between Kingsport and his family in the Outer Banks.

"What I miss about East Tennessee is the beauty of it," she said. "When I'm away from home, I miss the Southern hospitality, everything that's stereotypical about the region; ease of travel, communication."

This story has been posted in the following forums: : Headlines; COS - Afghaistan; COS - Kazakstan; Women's Issues