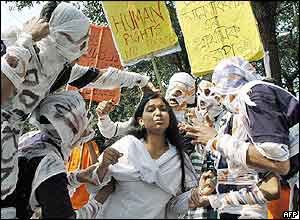 Organisers of the demonstration said that it was being held to show to the outside world that Bangladesh is a peaceful country where the vast majority of people are prepared to speak out against the horrific disfigurements caused by acid attacks.

International Women's Day has been celebrated differently in Bangladesh.

Thousands of protesters, most of them men, turned out for a men-led march in the capital, Dhaka, on Friday to protest against acid attacks on women.

Latest figures released by the Acid Survivors' Foundation, a prominent NGO which helps rehabilitate victims, show that there were 338 attacks carried out across Bangladesh last year.

The march was attended by numerous prominent male politicians from across the political spectrum.

Organisers say the event is unique in Asia and shows that Bangladesh is prepared to acknowledge the problem and takes active measure to combat it.

Acid attacks on women are carried out across Asia, with reports of such incidents from Burma, Cambodia, India and Pakistan.

"The reasons for the escalation in the number of acid attacks is linked to the general breakdown of law and order in Bangladesh," says Dr John Morrison, executive director of the Acid Survivors' Foundation.

"But at least the new government elected last year seems to be determined to do something about the problem. It has introduced laws in parliament that will make some acid attacks a capital offence, and has set up special courts which must prosecute all suspected acid throwers within 90 days of charges being framed.

"It has also introduced new laws to restrict the sale of acid," he says.

Organisers of the demonstration said that it was being held to show to the outside world that Bangladesh is a peaceful country where the vast majority of people are prepared to speak out against the horrific disfigurements caused by acid attacks.

Acid victim after plastic surgery
Even after surgery victims are terribly disfigured
Most of the victims - around 80% of whom are women - have had sulphuric or hydrochloric acid thrown in their faces.

The Prime Minister, Khaleda Zia, says that such attacks blacken the name of her country.

She says that she is determined to improve the rights of women, but critics say that her four-party coalition contains two hardline Islamic parties who are not renowned for their promotion of women's rights.

Bangladesh - with a population of 130 million people - is a conservative Muslim country where many people have traditionally regarded women as subservient to men.

The vast majority of acid attacks are carried out on women by jilted husbands or boyfriends. Some are angry that their advances have been rejected; in other cases it can be because of a domestic row such as a dispute over a dowry payment.

Experts say there is also evidence to suggest that more men and children are being attacked, too, and that acid may in some cases be replacing guns and knives as an instrument of attack.

"It's difficult to tell what it is that goes through the mind of someone who throws skin-burning acid over another human being," said Dr Ron Hiles, a British plastic surgeon who recently travelled to Bangladesh to treat acid attack survivors.

"There are all sorts of motivations, one of the prime ones being jealousy.

"But I don't think people realise before they carry out the attack quite what horrific injuries they will cause."

This story has been posted in the following forums: : Headlines; COS - Bangladesh; Women's Issues