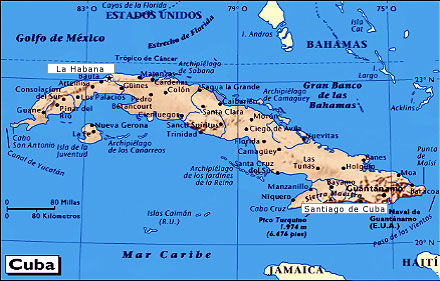 "I go for long walks and go to places where Cubans are going to be. I stop at newsstands, paladares, walk out on a beach and talk to fishermen, talk to young people, talk to folks at baseball games. . . . I have actually been surprised by the extent of the creativity and spontaneity of the Cuban people. If you talk to people, they talk back to you. I talk not just to Cuban artists, musicians or independents."

'MY INTEREST IS THE FUTURE'
THE NEW HEAD OF THE U.S. INTERESTS SECTION IN CUBA DISCUSSES THE ISLAND, ITS PEOPLE, AND WHAT'S TO COME
BY FRANCES ROBLES
frobles@MiamiHerald.com

Michael Parmly arrived in Havana in September as the new chief of the U.S. Interests Section. He succeeds James Cason, who had many public confrontations with the Fidel Castro government.

A career diplomat, Parmly has served in a number of countries emerging from conflicts, such as Afghanistan and Bosnia-Herzegovina.

He spoke to The Miami Herald last week. Here are excerpts from that interview.

Q: What were your first impressions of Cuba? Any surprises?

A: I go for long walks and go to places where Cubans are going to be. I stop at newsstands, paladares, walk out on a beach and talk to fishermen, talk to young people, talk to folks at baseball games. . . . I have actually been surprised by the extent of the creativity and spontaneity of the Cuban people. If you talk to people, they talk back to you. I talk not just to Cuban artists, musicians or independents.

It's the Cuban mind that's lively. That's going to come in handy when the (post-Castro) transition comes. They can think for themselves.

Q: Do you meet many people who vehemently defend Castro?

A: There is a certain number of people that believes in the system. To give you an example, I met a person who expressed skepticism of . . . dissidents, because they threaten the accomplishments of the revolution. . . .

She said everything she is and has accomplished is a product of the revolution. I didn't say it like this, but I thought, ``How about giving yourself some credit, girl! You're a single mom who put herself through school . . . Your energy, your drive brought you to where you are.''

I enjoy hearing those views. The back and forth is interesting. I'm intrigued that I have those conversations -- I don't have many.

Q: Do you think you'll be the chief of the U.S. Interests Section during the transition?

A: If you operate with that mindset, you do a disservice to the people on the island today. We need to play for today while being concerned for tomorrow. That's what I think about every morning when I wake up: What can I do for people today? We stand ready to help them.

Q: Do you think your past diplomatic postings make you uniquely qualified for this job?

A: I don't know about uniquely qualified. I have come from a number of post-conflict societies engaged in long periods of difficultly. If there is one thing I came away from in Afghanistan it's to get as close to people as you can, because they are going to be the ones with the answers.

Q: What is the thread that links all of these recent economic changes, from pay raises to electricity rate hikes?

A: Fear of change, trying to lock in a legacy that has never existed -- only apparently existed in somebody's mind. That's to me what this is about: fear of one's own population.

Q: Are you seeing an increase in attacks against dissidents? Why now?

A: I can't explain pathological behavior. One seeks an explanation . . . . Are we seeing this because people are aware of their own mortality? I don't know, and I don't choose those words lightly.

Q: Fidel Castro mentions the prisoners at Guantánamo every chance he gets. Doesn't the detention of prisoners there hurt U.S. credibility?

A: I don't accept the lies as version of reality -- as opposed to legal procedures, the International Committee of the Red Cross' ability to monitor on a regular basis, ability of foreign governments to visit there. If anything, it's a statement for rule of law.

I am not an archaeologist.
ABOUT MICHAEL E. PARMLY

• Bachelor's in International Relations and Latin American Studies from St. Joseph's College in Philadelphia, master's from the Fletcher School of Law and Diplomacy at Tufts in Massachusetts.

This story has been posted in the following forums: : Headlines; COS - Colombia; Cuba; Diplomacy