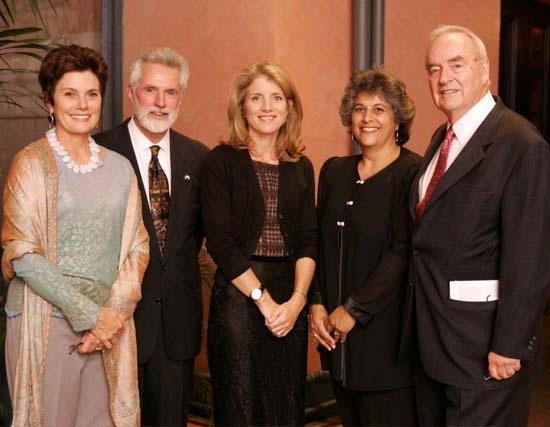 "I want to take a moment and thank Barbara and John for establishing the Peace Corps Fund – it came at a time in our history shortly after 9/11 when as a nation we faced many new challenges and continue to do so. The mission of this organization-- to sensitize and to teach America about the people and the world we knew as Peace Corps volunteers-- is desperately needed today. " Journalist Maureen Orth served as a Peace Corps Volunteer in Colombia in the 1960's.

Thank you, Barbara. (Food and wine remark.) I want to take a moment and thank Barbara and John for establishing the Peace Corps Fund – it came at a time in our history shortly after 9/11 when as a nation we faced many new challenges and continue to do so. The mission of this organization-- to sensitize and to teach America about the people and the world we knew as Peace Corps volunteers-- is desperately needed today.

We also want to give a special thanks to Caroline Kennedy for her decades long loyalty and support of her father’s vision of the Peace Corps and her own commitment to serve. Today, Caroline is not only a best selling author, who has taken time out from her book tour for her wonderful new book, A Family of Poems: My Favorite Poetry for Children, she is also the Vice Chair for The Fund for Public Schools here in New York which has already received $100 million in pledges and gifts to improve the city schools and to inspire belief in them.

How fitting then is our mission here tonight to celebrate and honor our 5 outstanding New York City teachers who began their lifetime commitment to serve in the Peace Corps and who continue to make such a difference in the lives of their students. Tonight they are our inspiration for bringing the world back home.

Our first award goes to Ira Cornelius Weston. Please come up to receive your award from Caroline Kennedy.

Ira says one of his best moments as a Peace Corps Volunteer in Kenya was when the school named a goat in his honor. Today, Ira continues to work with the Peace Corps, actively involved in recruitment, and each year, on Peace Corps Day, March 1, he turns the whole curriculum of his school over to teaching about volunteerism and the countries where Peace Corps Volunteers serve.

Kirsten Larson is next

Kirsten Larson is in her seventh year as a New York City educator and is currently teaching at Marble Hill School for International Studies in the Bronx. A Peace Corps Volunteer in Senegal, West Africa, Kirsten is a graduate of the Peace Corps Fellows program at Teachers College, Columbia University, and each year chaperons high school students overseas. On a recent trip to Turkey, she worked to promote a greater understanding of the role that youth can play in a democratic society. This semester she is working on an exchange program, funded by the State Department, between the Marble Hill School and a high school in Dakar, Senegal.

Pedro Santana has been a New York school’s principal for five years. This fall he established the Manhattan Charter School whose mission is to prepare its students to achieve high academic levels in music and in four core academic subject areas. After returning from Kenya, Pedro began teaching here in New York, then returned to Africa with the American Refugee Committee to help rebuild a hospital in Zaire. Back in his native Bronx, Pedro once again taught school while also becoming an active recruiter for minority Peace Corps Volunteers. At age 25, Pedro and his wife became parents of a teenager when they adopted an 18-year old Kenyan boy. This young man—his adopted son-- recently graduated from Utica College with a degree in computer science.

Allison Granberry, who lived in a thatched hut in Western Samoa, cannot imagine not sharing her stories of life in the Peace Corps with her students here in New York. Now in her fifteenth year of teaching science in South Bronx public high schools, most currently at Lincoln-Hostos Academy, she is also one of the founding coaches of the New York Urban Debate League, a public policy organization established to offer students the opportunity to compete in national and international competitions. Scholarships line???

Ingrid Buntschuh is the Assistant Principal of Science at A. Philip Randolph Campus High School on the campus of City College on 135th Street in Manhattan. In Kenya she taught high school science and home economics and keeps her knowledge of Swahili alive by teaching the language to her high school students; she also volunteers every fall as a translator for the New York City marathon. Ingrid has been a New York City educator for the past sixteen years and plans on joining the Peace Corps once again when she retires.

Quite an extraordinary group of Returned Peace Corps Volunteers who continue to serve and have embraced the Toughest Job you will ever love.

Thank you all for joining the Peace Corps Fund tonight.

Please bid on the Silent Auction items. Enjoy the great delicacies from around the world and stick around for some great entertainment.

This story has been posted in the following forums: : Headlines; Figures; COS - Colombia; Journalism; Fund Raising