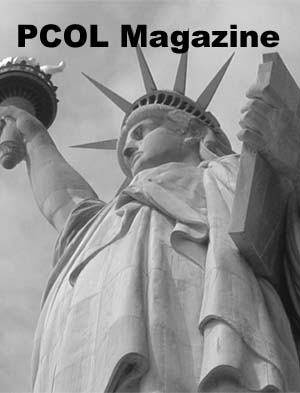 The case raises the issue of how free speech protection will be applied in the proliferating world of weblogs, or blogs, and underscores the growing influence of bloggers on business and government. The increased scrutiny is putting bloggers on notice that they need to use their power responsibly, said Palfrey at the Berkman Center. But he said the plaintiff faces a high bar in the Maine case. ''When someone is using the Internet or any media for political speech, that's afforded very high protection," Palfrey said.

In addition to providing pro bono, "first line" legal advice, the Media Bloggers Association (MBA) seeks to raise awareness of attempts by governments and corporations to intimidate bloggers and citizen journalists by encouaging members to report such actions on their own blogs and encouraging all bloggers to carry the news throughout the blogosphere. "Peace Corps Online" is a member of the MBA.

A coastal Maine blogger who criticized the state's tourism office has been hit with a lawsuit seeking potentially more than $1 million in damages for allegedly making false statements and posting on his website, Maine Web Report, images from proposed tourism advertisements a New York agency prepared for Maine officials.

The case raises the issue of how free speech protection will be applied in the proliferating world of weblogs, or blogs, and underscores the growing influence of bloggers on business and government.

''It's a reflection of the extent to which businesses are taking critiques from the blogosphere very seriously," said John G. Palfrey, executive director of the Berkman Center for Internet & Society at Harvard Law School. ''Bloggers have gained enormous power."

Warren Kremer Paino Advertising LLC, an agency hired by the Maine Department of Tourism, filed suit in US District Court in Maine last week, alleging the blogger, Lance Dutson of Searsmont, Maine, outside Camden, violated the agency's copyright and defamed the agency in blog entries self-published at www.mainewebreport.com.

Dutson, an independent Web designer, launched his blog last fall to comment on technology and Maine tourism issues. He has written commentaries ridiculing the state's tourism efforts and, last month, he posted a ''rough draft" advertisement pulled from Maine's Department of Economic and Community Development website showing a collage of iconic images of the Maine seacoast, woodlands, and ski slopes, with a dummy phone number that turned out to connect to a line promoting a phone sex service. The agency had inadvertently placed the phone number on the draft advertisement for a presentation made to state tourism officials.

''This is supposed to be our biggest industry," Dutson wrote on his blog yesterday, referring to tourism, ''but it's being run like a trailer park daycare on its 3rd notice from the Human Services people."

In an interview yesterday, Dutson said he was served with the lawsuit Saturday by a sheriff. ''This cop car pulled up to my house," he recalled. ''It was pretty good for neighborhood gossip."

The advertising agency is suing Dutson on three counts: copyright infringement, defamation, and trade libel/injurious falsehood. It seeks statutory damages of $150,000 for each of six images it alleges were infringed upon, as well as unspecified punitive damages and legal fees. Dutson is being represented by Gregory W. Herbert, an attorney with Greenberg Traurig in Orlando.

Dutson said he thinks Warren Kremer Paino is trying to silence him. ''I'm basically a freelance Web designer," he said. ''I have three kids. We're just a dead-middle-of-the-road Maine family. If they succeed in this, it'll ruin us. I can't write that kind of a check."

In the lawsuit, filed by the agency's attorney, Alfred C. Frawley III of Preti Flaherty in Portland, Maine, the plaintiff claims Dutson's blog ''contains numerous defamatory statements designed to blacken" the agency's reputation. As one example, the suit cites Dutson's claim that the advertising agency has been wasting Maine taxpayers' money in its work for the tourism department.

Tom McCartin, president and chief operating officer at Warren Kremer Paino, said the firm decided to sue after Dutson walked out of a meeting scheduled in Augusta, Maine, specifically to address his concerns about the tourism campaign.

''I don't think his real mission here is to get answers for the taxpayers of the state," McCartin said. ''One of the things he wants to do is to get attention. He's potentially causing some real harm to our agency if people go into his blog and start reading things that aren't true."

Other bloggers have rushed to Dutson's defense, portraying the matter as a clear-cut free speech and First Amendment issue. ''This is a deep-pocketed litigator trying to stop a small media outlet, a blog, for saying things that they don't like," said Robert A. Cox, a New Rochelle, N.Y., blogger and cofounder of the Media Bloggers Association.

The increased scrutiny is putting bloggers on notice that they need to use their power responsibly, said Palfrey at the Berkman Center. But he said the plaintiff faces a high bar in the Maine case.

''When someone is using the Internet or any media for political speech, that's afforded very high protection," Palfrey said.

This story has been posted in the following forums: : Headlines; Journalism; Freedom of Speech; First Amendment